Making it as
Castaway 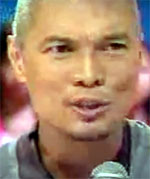 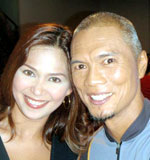 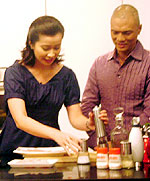 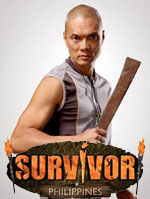 Food Glorious Food
I love food. I guess that's fairly obvious by this website....Mountain Biking, Mountaineering, Yoga, White Water Rafting, Rock Climbing, then from out of nowhere, Food Odyssey! When I surf the 'net, I usually get fixated on food sites. Food is celebration of life...of good company, and of good conversation.

Castaway Perk
Again, as a perk to being a Survivor Philippines castaway, I was invited (with another castaway John), to guest in a tv cookshow, QTV's QuickFire - a quick segue between regular shows, televising 10-minute cooking that's delicious to the last mouthful. As I am oblivious to what's on the tube, I didn't know there was such a show. We were to do 3 dishes.

QTV Website
Taking ownership of my 'guest' role, I naturally looked up the show on the internet so that I can come prepared. I found QTV's website (http://www.qtv.com.ph), but guess what? It's weird, but the site has no links...just a homepage promoting the show Shop Around Asia...and that's it! I had to go to Google other sites like Multiply, Wikipedia, Blogspot, etc to get more info about the show. 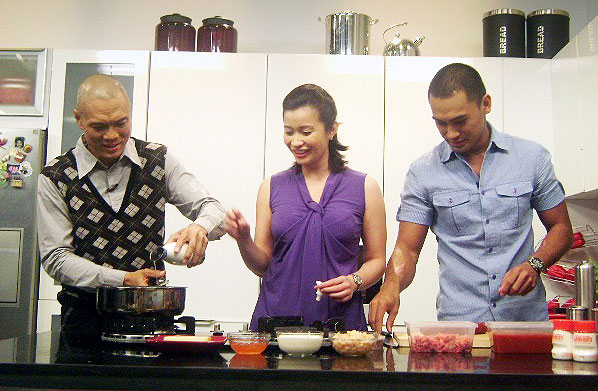 Ajinomoto Rules!
Before heading to the show, I was told to have a different shirt for every dish, but not to wear anything green, yellow, white or striped, as it wouldn't register well on tv, not to mention green and yellow are reminiscent of a competing product's corporate colors...that's not a sponsor. Yes, it's Ajinomoto supporting this show, so red is good! As a general rule, I support the companies that support the companies or events that support me...so now you see Ajinomoto on the right side bar.

Nothing to Wear
Dilemma. I really don't have anything to wear, let alone 3 different tops for the 3 different dishes. I was told I cannot wear my signature castaway sleeveless shirt. Well, the reason why I always wear that on tv is because I really have nothing else to wear. I fit my life in my backpack so I don't want to own more than what I essentially need.

Maldita Rocks!
Maldita to the rescue! Maldita (the clothing apparel store) is a proud sponsor of GMA shows (or maybe just Survivor...I don't really know), but as part of the deal, I get to go to their store and pick the clothing of my choosing! Wow, I can look fashionably chique without spending for it....cool....totally cool. Much better if I don't have to return the clothes after, but at least, I don't have to worry about what I have to wear. Hey, checkout the Maldita logo on the right side bar too!

Chef Rosebud
So, there I was showing up at the studio for taping. I finally saw the host, Chef Rosebud. Wow, she's a looker! A beautiful mom who can cook! What a nirvanic combination...lucky kids...lucky guy! She's a graduate of CCA with a degree in Culinary Arts and Technology Management and soon after, the manager/operator of Naughty Strings Bar and Resto in Tomas Morato.

A Peek in the Fridge
My curiosity got the better of me. I took a sneak peek inside the fridge...whoa! You would think Sänti's sponsored the show - extra virgin olive oil, cheese, pasta, olives, wine...stuff that's not easily sourced locally, and if you do, it'll cost you an arm and leg. My enthusiasm hit the roof and I was gung-ho. Let me get to the kitchen and roll up my sleeves!

Fillet of Sole
When our turn came, John and I took turns helping out Chef Rosebud. First on the list was Fillet of Sole. We had to fry the fillet in butter. I couldn't get over the awkward feeling of using a metalic prong on a Teflon pan. The pan drippings were deglazed with lemon juice, but it didn't turn out well. "Cut!". Niko, the technical consultant, Direk Ogi were immediately on the scene to assess, brainstorm and troubleshoot with Chef Rosebud. When the sauce was to its right consistency and taste, the camera resumed rolling.

Chili with Chorizo
Second dish was Chili with Chorizo...time to switch into the Argyle top! We fried the chorizo to squeeze the fat juices out, then tossed-in the ground beef and combined the other ingredients. Even without the chorizo, the dish would have come out perfect. But the addition of the chorizo added new dimension that kicked up the chili a few notches higher.

Macaroni and Cheese
Last and final dish was the generation-tested Macaroni and Cheese. If there is ever such a thing as a comfort food, this is it. When you're done and over with haute cuisine or the flavor of the month dish, or the new age nouvelle cuisine, there's always comfort food...the same stuff mom used to whip up for us kids and our playmates.

10 Minutes
It was a tight timeline. We really had to ensure the dish is done in 10 minutes. That was one of the challenges of the show. Constant tasting is done along the way, and if adjustments need to be made, they 'cut' the taping to troubleshoot. It has to pass the discriminating palettes of Chef Rosebud, Niko (who's an established chef himself), and oddly, the director, Direct Ogi (who's also a food connoisseur and a bluesman!).

So, it's not really a continuous 10-minute non-stop shooting, but the final cut (with the troubleshooting factored-in) fits nicely into 10 minutes, ensuring the viewer can cook the dish within the timeframe.

Nose Bleed!!!
The amusing thing is, everytime it came time to sit down, eat and critique the dish, Chef Rosebud never fails to describe my comments as "nosebleed!". On the fillet of sole, I described myself as a Pavlovian dog salivating the entire cooking process and finally I could sink my teeth into the dish...nosebleed! On the chili, I described the combination of all the diversified ingredients as a full orchestra with the flavors amalgamating into a single magnificence...nosebleed! On the macaroni and cheese, the asst. director said, "Ok, roll the camera, Gigit no more nosebleed! Take!". I was surprised. I didn't know what to say. I just got too self-conscious I felt I had to say something benign to fit in. It's not like I architecture my speech to say something nosebleed...what comes out, just comes out. Oh well. I thought the whole nosebleed thing was funny.

Ending Thoughts
Cookshows are plagued by the reputation that the only things that matter are aesthetics and methodology...forget about the taste...viewers can't taste it anyway! Well, not this show. A QuickFire imperative is to make the dish not only look good, but taste good as well. I call that integrity.

Whenever I'm rushed to make a good quick meal that I know won't waste my precious time and effort, I have full confidence whipping up any QuickFire recipe.

»» next story: Besieged at Boracay SandCastles
»» next Food Odyssey: Laing (Pinangat) and Bicol Express
»» next Showbiz story: At Random TV with Aesha Villanueva