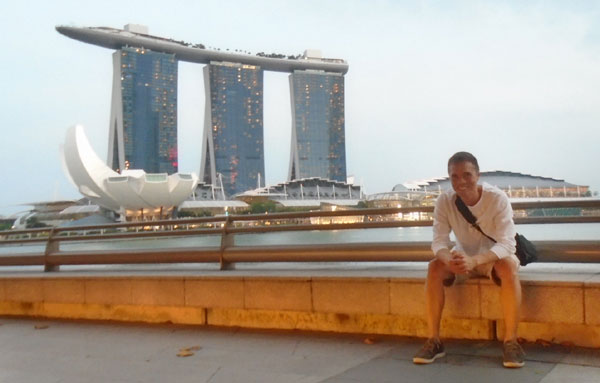 Singapore conjures mixed reactions from people depending on where they come from. European travelers mostly regard it as 'just another city'. Asian travelers marvel at how an Asian country can be at par with first-world countries. Singaporeans feel too wound-up about keeping in step with the city's hectic pace. Malaysians see it as a place across the border with good incentives for higher paying jobs. Overseas workers see it as a greener economic pasture.

Personally, as a Filipino with Asian lens, I see Singapore as a role model on how a country can hurdle insurmountable obstacles and come out on top of the global stage, given competent, sincere and indefatigable leadership.

(August 8-22, 2016) After 2 weeks in Singapore, starting off with my detention at Immigration, welcomed by my friend Eunice and struggling to find a cheap place to sleep, life marginally eased up with every passing day. I eventually secured barter hotel and resto deals and met interesting people who added color to my stay. I rediscovered Singapore in a different light. My analogy for Singapore is that of a friend I'm not necessarily close to, but whose company I enjoy with equal respect and admiration.....more »»

(Aug. 8-22, 2016) Unlike Ubud (Bali) where my peoplescape was one of a fast-turning revolving door, Singapore was more fleeting and far in between. Singapore is not a backpacker destination where spontaneous social interaction is expected and anticipated. The local culture doesn't lend itself to that and the visiting travelers are not the types you see sleeping on bunk beds in mixed dorm rooms.....more »»

Discovering the Neighborhood Cafes of Singapore

(Aug. 8-22, 2016) Exploring neighborhoods is fun and full of surprises - trendy cafes, artistic chill zones, innovative restos, etc. Every few blocks or so, you stumble upon a chic cafe that invites you in. Then you invite your friends to meet and chill there!....more »»

(Aug 16, 2016) While exploring my Lavender neighborhood, I chanced on a wellness center that uses a US$50,000 German-import, a Biological Cell Regulation machines that stimulates cell repair and regeneration to eliminate pain and restore health. When I told the owner I'm a yoga practitioner, she offered treatment to see how it works on a fit body. I didn't say no.....more »»

(Aug. 9, 2016) My benevolent universe parted the Red Sea to bring me a phone I needed to have - a Xiaomi Redmi Note3. Its fingerprint was all over the place.....more »»

(Aug 8-22, 2016) Singapore is an expensive city and lodging is a major expense for a traveler. It is not backpacker-friendly. The cheapest bunk bed in a dorm room hovers around US$10/night. I cannot sustain that price point. I had to think fast and survive on my wits to ensure a comfortable night's sleep without hemorrhaging cash." />....more »»

(August 8, 2016) I got detained for 2 hours with my bus leaving me. Having lost precious time, I had to scurry for a bus to the main city after my release. I have long admired Singapore. But after this, how do I feel now about this city-state?....more »»

(Mar 23, 2015) Prime Minister Lee Kuan Yew transformed Singapore, then suffering from social unrest, housing crisis, decaying infrastructure and sluggish economy into a modern city-state ranking 3rd in global GDP next only to Qatar and Luxemburg. Singapore's public housing is now home to 90% of Singaporeans with its model being emulated by several countries. With his passing, I take a look at the life of this incredible man.....more »»

(Mar 22, 2015) With very little money left from the 6 months of backpacking Southeast Asia, I found myself in the most expensive country in the region where I will be spending the next 30 days. If I had to use my cash for all the things I need, I'd go in the red in a few day's time. I had to think like a human Swiss Army knife, putting out all life skills in my arsenal, mustering all the sinew needed to survive on my wits, my abilities and instinct....more »» 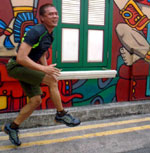 (Feb 21 - Mar 22, 2015) Singapore has so much to offer to the passing traveler. With its efficient and comfortable transport system, getting around is a breeze - Universal Studios, Sentosa, Arab Street with its Middle Eastern cultural offering, Little India, Chinatown, the Stadium, Bugis area, Orchard Street, etc. Indeed, there is no bad seat in Singapore. Every direction you take brings you to an unexpected and surprising place....more »»

(Mar 21, 2015) I had a chance to conduct a yoga class in Singapore. The yoga studio owner said, 'At this point you already know they like it hard even for our regular class. So if we have to call your class POWER YOGA, you have to kill them. The expectation is high'. That statement changed everything. How do I come up with a sequence that won't alienate the beginnners, but make it worthwhile to the hardcore? Since I do all the asanas myself while I cue them, I have to make sure too I have to survive the sequence.....more »»

(Mar 17, 2015) Marina Bay Sands isn't just a hotel, even though it's the 2nd most expensive building constructed at US$5.5B. Marina Bay Sands has become the identifying landmark for Singapore in the same way the Eiffel Tower is for Paris and the Petronas Twin Towers is for Kuala Lumpur. Touring the hotel and its surrounding area is almost like a walk on the city's citadel....more »»

(Mar 16, 2015) Singapore has accomplished so much in so little time. From decaying infrastructure, social unrest, housing crisis and sluggish economy after the war, it now ranks #3 in global GDP/capita next only to Qatar and Luxemburg. We're only talking 60 years. America took 200 years. Europe took a millennium. What's the magic?....more »»

(Mar 8, 2015) After 6 months of traveling Southeast Asia, I finally found a yoga oasis in Singapore I could call home. With my almost daily practice, I feel my fitness and strength coming back. At Yoga Inc., the teachers are competent, the facilities are first rate and the teaching styles are refreshingly different from the ones I've become used to.....more »»

Singapore on a Shoe String

(Feb 20, 2015) Having explored Thailand, Laos, Cambodia, Vietnam and Malaysia on my way south, the only country remaining is Singapore - reputed to be the most expensive city in Southeast Asia and the 4th in the world (Forbes). Backpacker forums summarize Singapore this way: Don't even think about it! This sent chills up my spine, specially with my dwindling cash with nothing on the horizon. I had to think many times. Do I cave in and go back to Thailand for $1 meals and $5 dorm beds? I had to remind myself that the worst thing that can happen in life is to be haunted by the specter of 'should have done it' and 'what if'. With extreme trepidation, I braced myself for whatever happens to me in Singapore....more »»

(Jan 26, 2003) While Lee is revered by many as a wise international statesman for his selfless sacrifices into building Singapore to what it has now become, Marcos lies dead with the billions he looted from the Philippine treasury yet you can't distinguish his bones from that of a poor man...more »»