Starting From Scratch
I had to go to Singapore by bus from Malacca (Malaysia) to catch a flight back to the Philippines. This was my 2nd time in Singapore, the land known for progressive development and high cost of living - quite daunting to a backpacker surviving on a shoestring. I loved it the first time. It still sounds miraculous that I survived 30 days here on US$300 - inclusive of boutique hotel stays, daily yoga classes and a personal tour of the Marina Bay Sands. I got lucky being able to work out barter deals that went a long way in conserving my meager cash.

All of that is memory. What welcomed me back was a 2-hour detention at Immigration followed by a frantic search for a place to stay. With none of my previous deals active, I had to start from scratch. My immediate concern was how to survive in this expensive city. 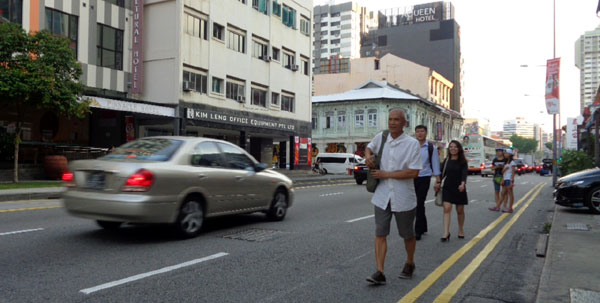 Rushed
Like Malacca, I was rushed the entire time from preparing proposals, meeting web deadlines, catching up on my blogs and looking for another roof over my head. I couldn't possibly see myself as a tourist - more like an expat who has to meet pressing deadlines. If not for Eunice who occasionally invited me for coffee and chats (thank you Eunice!), I would have been sucked-in like a black hole by my laptop. It's odd that for a guy like me who has no home, no property, no money and no steady job, I am exhaustingly busy that I need 36 hours to fit in one day!

Lavender District
Life gradually become easier as the days passed. I was able to arrange a few hotel deals within the Lavender District which sustained my stay from my 4th night til departure. At US$10/night being the cheapest, I could not have lasted more than a few days in Singapore. With toast and jam included for breakfast with my lodging, I only had to worry about 2 meals in a day. Sometimes, I got lucky. One time, I closed a resto deal at The.Twenty.Cavan - great food and mood ambience. I even invited Eunice to join me. It happens.

Exploring
With my lodging looked after, it freed-up my time to explore the city again, instead of spending time pounding the pavement for hotel deals - a sigh of relief I needed for emotional solace and psychological well-being.

e-Scooter Craze
What fascinated me in Singapore was the popularity of e-scooters. You see commuters whiz by on their silent e-machines like swarming flies. It was the coolest thing! From a rider, I learned the uni-cycle used to be the craze, then the 2-wheeled hover-craft, and now, the e-scooter is the flavor of the month - although it seems like it is here to stay as it's the most practical for short commutes. It's not cheap. Entry level model starts at SG$900 and the dual motors can go as high as SG$2400.

Uni-Cycle
I took a particular fancy at the Uni-Cycle - a one-wheel electronic urban transport vehicle. It's not for everyone but it wins the cool factor hands-down. I first saw this in Saigon while enjoying my Phoa. A guy on one wheel just whizzed by - it looked like a scene from a James Bond movie! I tried negotiating for a unit in the Philippines but got no response. But here in Singapore, while going to an electronic Expo event in search of a replacement laptop, I chanced on a few vendors selling Uni-Cycle units - they range from SG$350 to SG$1000. Again, I tried to negotiate an ex-deal but nothing came out of it. Sigh! I was already thinking that I'd be coming home with one. I haven't given up yet.

Goodbye
I was already enjoying my stay in Singapore and developing my own routine, with life getting better for me with every passsing day. I wanted to stay longer before heading back to the Philippines, but I was afraid I might miss the durian season by the time I arrive in Davao. With a little reluctance, I booked a flight.

Ending Thoughts
Singapore this time around offered something different and familiar from the last time. Similar because life started hard with me paying cold cash for my lodging until I arranged hotel deals. Different because Eunice was there. Usually, I meet people along the way and they leave in a few days before the friendship can deepen...and I start the whole social cycle all over again. With Euncie being a local, she was there the entire time. We'd go out for coffee and just hang without the rush. She even tagged me along to her hometown in Kluang, Malaysia. Of course I met other people who added color to my Singapore experience. And for all of that, I remain grateful.

I love Singapore. It still remains the place I would settle down to, if I ever settle down. I admire and respect their no-nonsense efficiency and their forward-thinking and forward-moving sense of urgency. Being a Southeast Asian hub, if I want a lively Asian grit, Bangkok is just a short flight away. Good food? Penang is just a short flight away (making it clear that Singapore has good food too - I just can't afford it!). Everything seems within reach from Singapore.

My analogy for Singapore is that of a friend I'm not necessarily close to, but whose company I enjoy with equal respect and admiration. It's a kind of friendship where familiarity has no place - a no-nonsense friendship. An arms-length kind of love. A friendship that gives you space but remains accessible. I know, it borders on cold and clinical. But if I want something more intimate, I wouldn't be looking for a friend. I'd be looking for a lover - now, that calls for a different country. :)

Thank you Eunice, thank you Singapore!

Next stop: A Gifted Dell Laptop from the Usual Suspect

»» next Traveling story: A Gifted Dell Laptop from the Usual Suspect
»» back to Traveling
»» back to Homepage