UN-Backpacker Friendly
Singapore is an expensive city and lodging is a major expense for a traveler. It is not backpacker-friendly. The cheapest bunk bed in a dorm room hovers around US$10/night. I cannot sustain that price point. As a general rule, if I have to pay cash for my lodging, I don't go over US$3/night. I had to think fast and survive on my wits to ensure a comfortable night's sleep without hemorrhaging cash.

Arriving Singapore
After the harrowing immigration incident, I found myself in Bugis where I had to find a place to sleep to no avail - Bugis is an upscale district. It was already dark after hooking-up with Eunice, a yogini I met in Bali, and I still had no booking. I didn't get any reply from my email proposals for a hotel web-deal, so I was on my own starting from scratch. In a cafe, I went through Agoda, Hostelworld and Booking.com until I found the cheapest I could find - Urban Hostel, SG13 for a bunk bed in the Aljeunid area. It was cramped with questionable transients (one of them was wearing a parolee ankle monitor!), but all that mattered to me was a place to rest my weary body after an exhausting day.

Nightly Packing
This would be my pattern for the first 3 nights in Singapore, packing and unpacking every single night to transfer to another hostel where lodging is cheapest. It was tough. I would spend the entire day on the road making deals and have to return back to my hostel at night - but instead of lying down to sleep, I would pack up, take the train and check-in to a cheaper hostel. The pattern repeated itself - Urban Hostel, Coziee Lodge, Gusti Hostel. It was exhausting and nerve wracking. Fortunately, it's only on these three nights I would have to pay for lodging. Had it gone on further, I would have been constrained to leave Singapore. 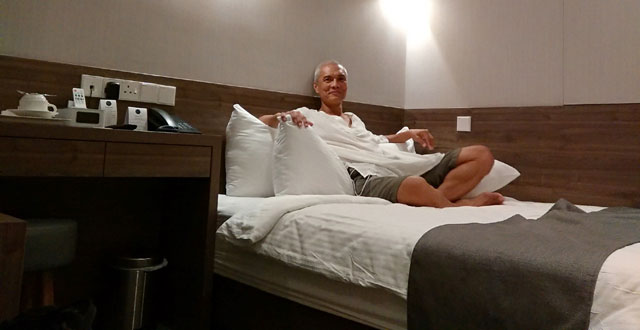 Meadows Hostel
Finally, I was able to talk to a hotel owner (not just a staff) who saw value in what I proposed. We shook hands on the deal and got myself a roof over my head for the next few days. It was a respite I needed. Meadows Hostel is newly opened and the owner is open to ideas that would improve the place. They have capsule beds for backpackers, free breakfast, chill area, free wifi, air conditioning and a great location in the Lavender area.

Meadows Hostel would be a beautiful beginning to the series of hotels I moved to in succession as part on an online deal until my departure from Singapore.

7 Wonders Hostel
They newly opened. Everything was new. I stayed 2 nights in their nicely appointed capsule beds. In its category, I would say they have it figured out the most. All essential backpacker needs are addressed - twin electrical sockets, light, fold-down tray and thick curtains on every bed, cafe with efficient wifi to double as a workspace if not crowded, in-house laundry facilities, compli breakfast and a receptive backpacker community to interact with. The owner, Nazreen, is hands-on who ensures operations go smooth and snag-free.

Arcadia Hotel
Arcadia Hotel is also new and the boutique-type, mid-priced hotel I checked-into. Clean, clever use of white space and elegantly muted, its luxurious room was sanctuary for me in the 1 night I stayed there. Breakfast was nicely plated that would rival an upscale resto. The staff were so helpful and friendly. Arcadia was pampering.

Pinnacle Hotel
This was where I spent my last night before heading to the airport for Manila. It's under new management - a lot of fixing and cleaning-up to be done, but the new General Manager is on top of things and making things turn-around. As I always do, I pointed out some key areas where he can optimize.

Ending Thoughts
I survived 2 weeks in Singapore despite its high cost of lodging. I was lucky to talk directly to decision makers/owners who see a fit with what I'm offering.

What I do for hotels is unique in a way. I make an assessment on key areas that need focus - big things and small things. From sluggish internet to an annoying squeak when a sliding door is opened, to how long you need to hold the flush for the water to go through - housekeeping wouldn't do that and the GM cannot do that. But me as a backpacker who's not too eager to move on, can. I've spent the last 4 years living in hotels so I know what works and what doesn't.

Combining the above with my proprietary online marketing campaign to boost their internet presence in a gamut of fiercely competing hotels, what I put on the table is both compelling and persuasive, given that it is also backed by empirical numbers from Google Analytics.

But at the end of the day, I'm just grateful to have a roof over my head.

Next stop: Getting my Xiaomi Redmi Note3 Smart Phone

»» next story: Getting my Xiaomi Redmi Note3 Smart Phone
»» next Traveling story: Biological Cell Regulation (BCR) Therapy at Chang Wellness
»» back to Traveling
»» back to Homepage