Lee Kuan Yew and Ferdinand Marcos
A Tale of 2 Dictators 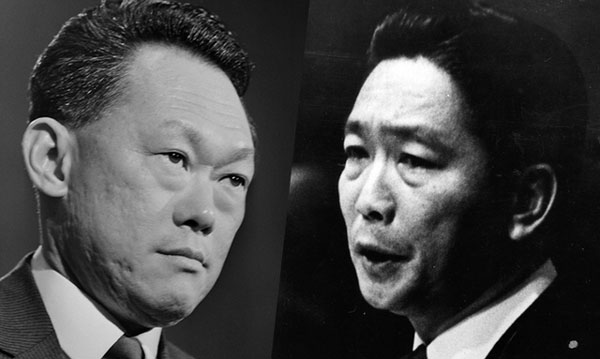 Dictatorship
Coming from the Philippines and having experienced first-hand the iron-fisted dictatorship of the corrupt Ferdinand Marcos, the word dictatorship should leave a foul taste in my mouth...and it does. But I'm talking about a different kind of dictatorship. Lee wielded his autocratic power the way a stern father would for the benefit of his children...tough love, but for the greater good of the nation. He stands alone in the global arena of world leaders precisely because there aren't too many who have ALL these qualities:

Let me elucidate. Pol Pot was a man of well-meaning vision...of bringing the glorious Angkorian past of Cambodia into the here and now. There's vision. Implementation? Millions died needlessly resulting in the killing fields (where a movie with the same name was made). Even today, human skulls pile high as a grim reminder of this madman's unbridled foray into his vision.

Mao Tse Tung likewise was a well-meaning visionary. His accomplishments as the "Great Helmsman" of Communist China are legendary. However, his pursuit of a wild utopia and failed program implementation (Cultural Revolution and Great Leap Forward) wreaked famine and death to some 60 million...very bad implementation.

1959
When Lee assumed power in Singapore in 1959, the city-state was a colonial backwater considered by many as a rag-tag piece of swampland mired in political and social unrest by a racially and ideologically divided population...in many ways, very much like the Philippines during that time. I cannot help but make the parallelism between Marcos and Lee. They both came into power about the same time, the political and social condition of their respective countries were roughly the same, both are regarded by many to be geniuses in their own rights, and both enjoyed absolute power.

1986
Fast forward to 1986 (when Marcos was toppled down), Singapore ranks as the world's fourth-highest per capita real income with mass public housing. The Philippines? After Marcos plundered the Philippine treasury coupled with human rights violation, 80% of the population plunged below the poverty line - enough said.

Choosing the Dark Side
There is common sentiment that Marcos had what it takes to make the Philippines as progressive as Singapore. He had what Lee had...brains, power and political will - the way he ingeniously implemented his corruption scheme from the systematic extortion of money to numbered Swiss accounts not to mention Liechtenstein and Panama is showcase-worthy. Unfortunately, he didn't have the one thing Lee had...the one thing in nature that stands beyond reproach...good intentions.

Ending Thoughts
Marcos had a unique moment to be part of history - to make the Philippines great...to lift the common man out of poverty...but he chose to pocket the money instead of using it for the greater good of the people. The other presidents succeeding Marcos could not even come close to having a shot. It was only him who could have done it. What a waste of a precious gift.

While Lee is revered by many (he has his share of detractors and critics as well) for his selfless sacrifices into building Singapore to what it has become, Marcos lies dead with the billions he looted from the Philippine treasury yet you can't distinguish his bones from that of a poor man.

(which the revisionist Marcos media machinery cannot influence or bribe)

»» next story: Joe Rockheads
»» next Lucid Thought story: Saturday Yoga + All That Jazz - The Movie