Insanity
It only took a week for me to realize the yoga programs I took on was crazy. With 2 daily intense practice, my body had no time for recovery. I was constantly fatigued with no relief. I was also stressed where to find time for everything else - my web work, my blog, etc. By trying to be everything, I was accomplishing nothing. A few things were also in dissonance. It was time to make the difficult decisions. 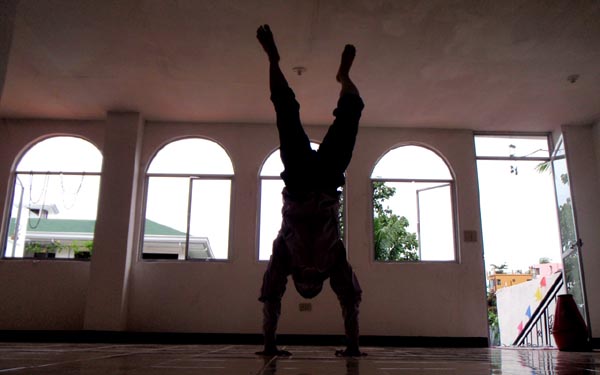 Trimming Down
With reluctance, I had to let go of YogaHub's 21-Day Challenge. If I didn't have anything else to do, that would have been perfect for my practice. Next to go was teaching a yoga class. They both helped define where the edge was - the line I already crossed. Additionally, I discontinued my Facebook acoount. Facebook, like procrastination, is the thief of time. What's left are my abs / handstand training and Veer's class. That was now doable without spreading myself thin. This also provides me ample time to venture into other interesting things that might just pop at.

Yin Yoga
After doing a series of hard yoga for weeks (Ashtanga, Power Yoga and Abs-core yoga), all I wanted was a gentle form of yoga to melt into a pose. I simply took the common seated asanas and held it for 5 minutes each, some of them with the help of strong determination. If yoga is all about balance, I maintain that Ashtangis and Power Yogis should balance their practice by going to the other end of the spectrum - Yin Yoga.

Gayatri Mantra
Gayatri Mantra is a highly sacred utterance (mantra) attributed to the sage, Rishi Visvamitra. It has been rendered into a beautiful devotional song by Tina Malia, with depth pulled from the very bowels of heaven and earth. The more I listen to this song, the more it permeated down to my core, evolving, giving new meaning to its poetic melody. The song's transfiguration took new form as a cry for forgiveness - very powerful, reducing me to tears. I can't even remember the last time a song delivered me a message. Forgiveness from whom? Forgiveness for what? I don't know. Perhaps in time....

Revolving Peoplescape
At 50,000 feet above sea level from a plane, a city looks placid, gentle and calm. However, at ground-level, when you have to deal with the nuts-and-bolts, you're sucked into its rhythm and flow - the pollution, congestion and everything else it's got. The imperative is to participate. Same thing with people. When you drift into people's outer social perimeter, you're essentially treated like a guest - there is the veneer of polite harmony. The more you are absorbed into its core, the more real it gets - the resonance intertwined with the dissonance, reality's grit, meshed into the landscape. Many things can happen. It can meld into a beautiful singularity, or it can become a precarious tight-wire act. Or, the imbalance can prove to be too difficult and unsustainable. You simply keep your truth and follow your bliss as the guiding compass. As you drift out of people's orbits, invariably, you're pulled into new ones...beginning at 50,000 feet above sea level.

Vaibhav 'Veer' Rana
"Gayatri Mantra... took new form as a cry for forgiveness" -- TheLoneRider
(Jan 31, 2014) A mantra is based on your intention. Whatever the intent, 'Mantra' would fuel it towards results. All mantras are essentially about forgiveness. If you are a perfect being without any transgression to ask forgiveness from, then you don't need a mantra.

»» next story: TheLoneRider's Kalinga Backpacking Article on Speed Magazine
»» next Yoga story: Shifting Yoga Paradigm
»» back to Yoga
»» back to Homepage