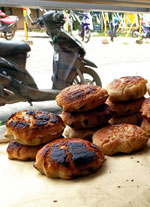 Genevieve Guest House
When Agoda showed me a resort by the beach in Maria for P197/day for a bungalow accommodation, I booked it for 7 days. Tax and all, it came down to P1721 or about P250/day - not bad. It wasn't easy getting there. I had to pay a tricycle P400 for 22.4 km to get me there. From the main road, it veered off for another 2.8 km with the last km in rough road to an insulated and isolated part of Maria Municipality, Barangay Nabutay. There were no eating places within 5 km. The bungalow turned out to be a dorm room. Still, I was the only one in the dorm room and the owners were extra friendly and helpful.

Most of the structures were made with bamboo and the surroundings were green - not exactly the manicured garden of Cliff Garden, but it was still green and natural.

Lapac Beach
The beach was a good 220m walk down a steep precipice - not exactly what I was expecting. On the map, its name is Lapac Beach, but there was no one there. Going there was a little precarious given the precipice, and the beach itself was abandoned and dirty with a lot of garbage. There were a few old local boats that were drydocked, but it seemed the boats are also old and abandoned.

The beach however, is a diamond in the rough. Why? Because there was good fine white sand and a coral reef. The beach is engulfed by limestone cliff rocks on both ends, so the entire 200 meters of coastline is 'secured' - no one could just walk there unless they pass through the narrow precipice. Because the place is isolated, away from the tourist belt, because it's dirty and unkept, it probably will sell for a cheaper price. All you have to do is clean up the beach and develop a resort. Make it a getaway honeymoon resort so its isolation becomes its marketing pitch. I'm just saying.

Biking Around
There are only 2 places to go by bike. North and it's the town center of Maria, 9 km away. South, and it's the livelier town of Lazi, 8 km away with steeper grades. Beyond that would be too much for a heavy folding bike. I biked in both directions and was pleasantly surprised that my bike could actually do it. Good workout for me too. If I should go further, I would ride my bike to Lazi and board the jeep there...sometimes, with my bike on board (I pay for my bike like another passenger).

The limitation about riding the jeep is that it's rare. There are about 3 jeeps plying the Lazi-Siquijor route and the last trip back is about 3pm. It means if I miss that last trip, I have to take the exhorbitantly-priced tricycle back to Lazi (from P70 to P500). Even if I catch that last trip, it also means I can't stay beyond 3pm. It was imperative for me to move closer to Siquijor. Lazi would be ideal.

Flat Tire
My worst nightmare happened on my 3rd night when I had a flat tire, 5km from my place. While I had some tools, it wasn't complete. I had to walk my bike in the dark. Because I couldn't see clearly, I missed my turn and had to walk much longer. Luckily, one local I asked for a possible vulcanizing shop, directed me to one about 2 km away. The wife of the repair guy happened to be there and even gave me a lift on her motorcycle, while I was lugging my heavy bike on one arm - 40 lbs at that.

When the guy looked at my inner tube, he found about 10 micro holes created by one tiny wire! He said that I ran flat which made the outer tube slide around the inner tube and created more punctures. His system was slow...gradually heating up the rubber patch until it melted on the puncture. Imagine 10 holes! We must have stayed there for 2 hours. We talked all the while and he told me his life story in Saudi Arabia as an all-around mechanic to an Arab boss who didn't pay him. He only charged me P100. I paid him P200 while profusely thanking him for being a god-sent.

I was able to ride my bike back through this unfamiliar terrain in pitch-black condition. I was guided only by my bike light and Google Map.

The 1-month lodging I finally found was in Lazi - thank god! Of all places in Siquijor, Lazi was my first choice.

Elvis Presley in the Afternoon
Consistently, Elvis Presley music would be played in the afternoon. I'm not sure if it's the neighbor or my resort. But it was played loud. At first, I found it unusual, but after some time, I began to enjoy the music. I was rediscovering Elvis Presley in new light. More than the hip-swaying rock and rock beat, he was actually playing a lot of Blues music...but Blues with a tinge of Rock and Roll. It was a good substitute to me for Chiang Mai's nightly offering of live music.

Beaches in Maria
It's too bad that during my entire 1-week stay, I wasn't able to explore the other 'nicer' beaches in the area - Umpas Beach, Bacong Beach, Secret Beach, Monkey Beach and Kagusuan Beach. From Lazi going counter-clockwise on the circumferential road, these are already the nearest beaches. Unlike Lapac Beach which somehow ends up with all the garbage on the coast, these beaches remain clean on their own. Mind you, all these beaches are remote, obscure and unheard of.

I was so rushed and pressured the entire time looking for a monthly place to stay that all of Maria's offerings had to be put by the wayside.

Routine
Being so remote, I spent a great deal of my time on my front porch on my laptop - Youtube podcasts (BeerBicep, Johnny Harris), updating my blog, progressing with my reading/writing/practice of Hatha Yoga Pradipika. I kept in touch with some friends, Kris, being the most frequent. It wasn't a bad life since I'm not too much into the dive/beach anymore.

Tatay Junior, the Shaman
I have a thing for shamans. Wherever I end up, I always look for 2 things - where to have tuba (fermented coconut sap) and the local shaman. Perhaps I am enamored by their special abilities.

The guest house handyman, Peter, told me about a shaman not too far away. He even offered to take me there. His name was Tatay Junior.

He was building a boat which was nearing completion - he said he will fish instead because fish has become expensive. I probed about the boat details. He said he can finish an 18-foot boat in 7 days. Cost? P7000 labor + P10,000 materials + P5000 for a 5-hp motor - P22,000 altogether you get a seaworthy boat for local transport and fishing.

His specialty is to give protection. He doesn't hurt anyone. He told me to bring him corn oil and he will do his ritual on it and fuse it with some mystical concoction which took him 7 years to gather. I should then take a table spoon in the morning and evening. Upon compliance, no evil witchcraft can ever befall me. To put this in context, this is Siquijor, the fabled laire of the sorcerrers. Just to be on the safe side, it's best to err on the side of safety.

He would not take money. Peter told me Tatay Junior likes 3-in-1 coffee, so I got a few bundles for him. Still, it took a lot of persuasion for him to take it.

Last Hurrah for a Home
On my last full day, I spent the time visiting several lodging places - near Napoli Cafe in Maite (San Juan) but mostly in Lazi. The last place recommended to me by Kristine, where I usually eat, was just a kilometer away from the town proper. She even drove me there on her motorcycle with my bike on her sidecar. The house owner is Mrs. Dodang, her Auntie, who was the nicest person. After showing me around the house, I knew I had to stay there. Interestingly, this is the nicest place of them all, and also the cheapest at P2000/month. I confirmed my acceptance the following day and started packing for my move.

Moving to Lazi
I was prepared to load all my stuff onto my bike and just ride it all the way to Lazi...although it's a bit reckless - my 3 heavy bags cannot be properly secured to my bike and my brakes are not good. Luckily, Jenny suggested that I ask Peter to carry my stuff on his motorcycle while I simply ride my bike. Brilliant! That's exactly what happened.

Ending Thoughts
Many people have helped me along the way - Peter, Tatay Junior, and even the twins (Kathryn and Kristine) where I eat (who referred me to the house I was moving to). They're not just people to me. During my times of need, they were heaven-sent. I am always grateful to the Good Samaritans my benevolent universe send to look after me.

In the last 7 days of my stay, Genevieve Guest House became more than just a lodging place - it was a home for me. Jenny, the wife/co-owner, took care of my needs beyond the call of duty. Her husband, Klaus, even offered me his bicycle and an emergency pick-up if I find myself with a flat tire again. If not for its remoteness, I didn't mind staying there instead.

With the pressure off, I can leisurely visit this place again and enjoy the off-the-beaten-path beaches. I also see doing a few projects in the future with Peter - with his local know-how and his skills, we can make a great partnership. 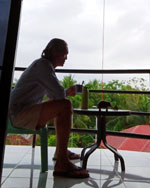 (Jan 21, 2023) After a frustrating 2-week search for a monthly stay in Siquijor Island, I finally found a suitable place in Lazi (my first choice) that was budget-friendly. Now, the pressure is gone, and I can finally resume a normal life and enjoy the offerings of Siquijor Island...more »»