Exploring the Cantabon Cave of Siquijor

Another Survivor Philippines Thing
Joy Mendoza, a staff of Survivor Philippines whom I met during my stint as a castaway, invited me to tag along for their trip to Siquijor. Siquijor has always been a source of good vibe for me. This time, with the itinerary of exploring Cantabon Cave up at Mt. Bandila-an, I was up for the taking. With her was Billy, another Survivor staff, and another couple. Yes, I was a fifth wheel, but it's all good.

The Hole at Blue Wave Inn
We stayed at Blue Wave Inn. Lovely place but showing signs of neglect. They have a weird sunken section. I thought it was a pool, but it had no water. On the base of the pool floor was another hole that opened up to the sea water. They said you can dive-in, but you won't reach the sea. I suppose they originally planned on building a pool but discovered it wasn't on solid ground - so they made it a bar instead. Weird!

6 On a Trike
It was tricky getting up there, all 5 of us on a tricycle. On steep sections, we all had to go down and walk up under the heat of the sun, until we reach a plateau where we can board the tricycle again.

Caving
There are a few caves in Siquijor. About 3 names being tossed around. The driver took us to Cantabon Cave. We were guided by 2 women who provided us with helmets and lights. The inside of the cave was rather spacious. I don't remember doing a body-squiggle, although most of the way was wet. At times, we would wade in hip-deep water. The inside of the cave was similar to that of Sagada - stalactites, stalagmites, curious rock formations, etc. The tour can take as long as 3 hours as the cave went on extensively. I don't know how far we went, but we didn't turn back. What happened was as we forged ahead, the scene looked familiar. That's when I realized, the guide took us on a loop - so I don't know exactly if we reached the end of the cave or rerouted to a bail-option. Altogether, it was quite an experience. 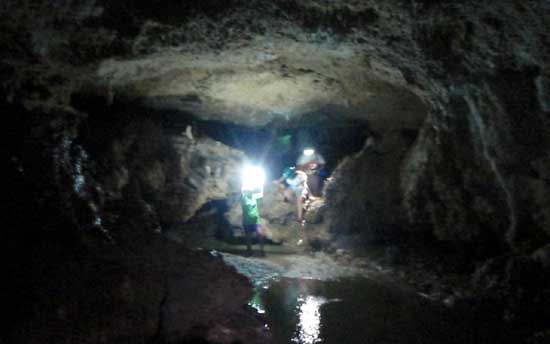 Sea Hag
Just outside the Guide Center, we were introduced to people selling healing potions (yeah, love potions too). Being close to Holy Week, we were told that the preparation to gather all the materials for the Holy Week celebration starts on this week. The main potion seller / healer happens to be the DENR representative as well - nothing wrong with that, but I somehow thought that to get those potions, you have trek the far reaches of the mountain into a cave with a wrinkled, bent and toothless lady stirring a simmering clay pot with a wooden handle. Oh well, been watching too much Sea-Hag cartoons.

Ending Thoughts
But kidding aside, Siquijor is doing the right thing by de-mystifying its tradition in putting these esoteric other-worldy practices out in the open. Not only does it replace something negatively eerie, but also comes as a source of tourism dollars. As I responded to one friend who cautioned me about the sorcery in the area, I said the only aswangs I know of are in Manila and they happen to be wearing Armani suits.

Next story: [an error occurred while processing this directive] Next Caving story:

[an error occurred while processing this directive] Next Traveling story: