The Boulevard
Lazi's community boardwalk is called the Boulevard - a 50m stretch of seaside promenade with cobblestones allowing for vendors to sell drinks, beer and barbeque. The area also has tables and chairs. The air is super fresh and the sea wall is wide enough to lounge or sit down on.

Yoga on the Boulevard
I would always be here in the evening to recharge and wind down. Since I moved here to Lazi, I would also be here in the morning to do my yoga, pranayama and just relish the beauty of the place I'm in. It's soothing just to be seated by the water. This is where I also meditate or look far into the distant boat lights to do my trataka.

Ending Thoughts
The Boulevard is my refuge. I am indeed fortunate to be living in such a wonderful place as Lazi with all its charm, helpful people, laid-back lifestyle, and its Boulevard. 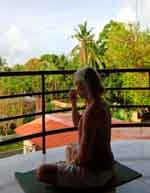 (Jan 26, 2023) In Hatha Yoga Pradipika, they talk about the importance of breathing ratios in pranayama. I downloaded a metronome app and pushed my limit to a 1:4:2:3 ratio with 5 seconds as one count...more »»