Lazi
Lazi or Siquijor Poblacion have been my first choice on where to settle down. They both have a boardwalk which makes the place lively even at night when most of Siquijor become silent. Lazi's Boulevard is the main draw for me. Even though San Juan is the popular spot for foreigners, the place itself gets 'lonely' after dark. The only places in San Juan with some vitality are the resorts themselves - but only if you're a guest. So finding a place in Lazi really stokes me.

Public Transport
Lazi is the junction where the jeeps begin their clockwise route (Lazi-San Juan-Siquijor Port) or the counter clockwise route (Lazi-Maria-Larena Port). Even though Lazi has a port, it's not used for passengers. Because the jeeps are rare with about 2 to 3 trips/day, it's practical to just have a motorcycle here in Siquijor. With its affordability (a brand new Rusi motorbike is as low as P45k), people just buy motorcycles...especially those who live up in the mountains.

Poblacion
Locals on the east side of Siquijor Island do their shopping in Lazi. There are several groceries, bakeries, eateries, pharmacies, etc. But alas, they don't sell ground coffee here. For a western offering, there is "Twenty4" where you get European-crafted bread, pizza and burger. At night, the Boulevard (seaside boardwalk) is frequented by locals for an alfresco eat-out. A popular tourist attraction of Lazi is the Cambugahay Water Falls. A few beaches to the west also line up Lazi's coast.

My Shire
The place I found is the best and cheapest from every place I've seen. It's only about 2 km from the town center which is no problem since I have a bicycle. My room is huge with a balcony overlooking the highway. It even has an a/c but I'm not really a fan of a/c. Besides, I pay extra for electricity and water. My room has enough space to have a work area and do my yoga. For a guy who wants cross-flow ventilation, my room has window/door on all 4 walls! I am really grateful for getting this place.

It's not all perfect though. On the downside, it's along the highway so it's always noisy. The house has no toilet flush - you have to use a pail of water. Also, it has no wifi, but you're free to install your own wifi. PLDT just opened up and a wifi subscription is only P1700/month.

No WIFI Blessing
There is no WIFI in my place but it turned out to be a blessing. Given that I had to conserve my phone data, I had to turn off notification, auto updates, auto refresh, auto sync, push advertising, etc. I was not as much online which forced me to do the offline stuff which I often push aside. Before I activate my data, I make sure all my messages have already been drafted and ready for sending. I learned how to work smarter.

Feeling at Home
Pumped with my new space, I went shopping for cheap household stuff - garbage bin, small containers, broom, water pail, indoor slippers, water jar, etc. I know I'll be leaving all these behind, and somehow, that's the cool part of it - I don't feel the need to take everything with me.

Ending Thoughts
If this good vibe continues without change, I could see myself staying here indefinitely until I have to move to Coron, Palawan to fulfill a commitment to a friend. A life also awaits for me in Coron, but in the remote chance that doesn't work, there is Lazi for me. 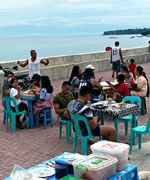 (Jan 22, 2023) The Boulevard at night is perhaps Lazi's strongest suite. It's a refreshing reminder that you are in a coastal town with fresh air, outdoor expanse and a harbor view...more »»