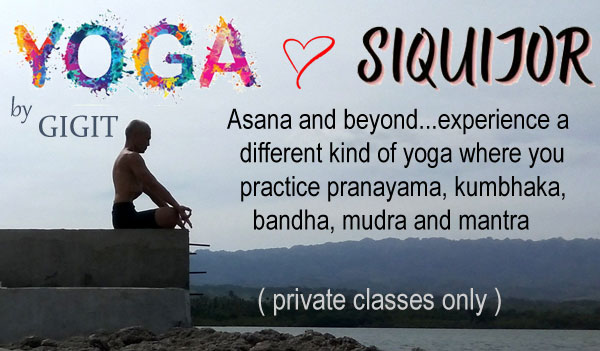 Good Things About Siquijor
Being Dumaguete-based now, I had Siquijor in my radar. I hear very good things about the place. GIS specialist Al Duncan told me his best time in the Philippines was spent in Siquijor! Fellow Vipassana meditator Mabi wrote a story saying you can see through the water in Siquijor's pier. Of course, there's the allure of meeting the sorcerers from which Siquijor developed a reputation for...thus the moniker, The Mystic Island.

The Wedding Invite
My schedule got a nudge when UPM (UP Mountaineers) Kram texted me an invite to his wedding on the island! With Siquijor just an hour away by ferry from Dumaguete, I was packed and ready to take off.

Kram
Kram and I go back to our biking days in UP Diliman. He was a frequent visitor of Sagada and we'd go riding the single-tracks together. In the mountain biking community, he attained halimaw (monster) status when he biked from Manila to Bacolod! With his long hair gone, I guess he's ready to take on the more challenging chapter in this life -- being a Dad and a family man.

Clear Water
Upon arriving at Siquijor's port and seeing through its crystal clear water, I realized Mabi was right. I could go swimming in the pier water of Siquijor. Try doing that at Manila's port harbor! It was love at first sight for Siquijor!

The Guests
Kram and another UPM, Daddy-O (another halimaw), met me at the pier and we were off for Kram's 4pm wedding at the St. Francis of Asisi Church, just walking distance from the pier. At their house I met his lovely bride-to-be, Jill, their baby (yes, they already have a bouncy 2-month old baby boy), and the rest of his family and would-be inlaws. It was a warm and hospitable accomodation. We were even checked-in at Bulisan Lodging, just across the street.

The Wedding
The wedding was what I consider ideal - small and simple, with only close members of the family attending. I think it was only me and Daddy-O who were not family. What followed was an alfresco garden reception after which we moved to their residence for the more informal gathering over beer and pulutan.

Bouncy Babies
Like I said, Kram, "I hope you and Jill are blessed with more bouncy and healthy babies".

Tour of Siquijor
The following day was earmarked for a tour of the island of Siquijor, hosted by Kram and his family. 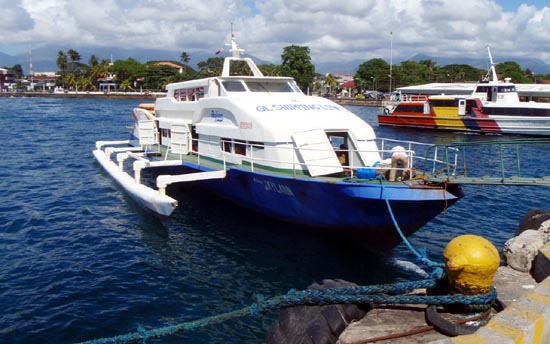 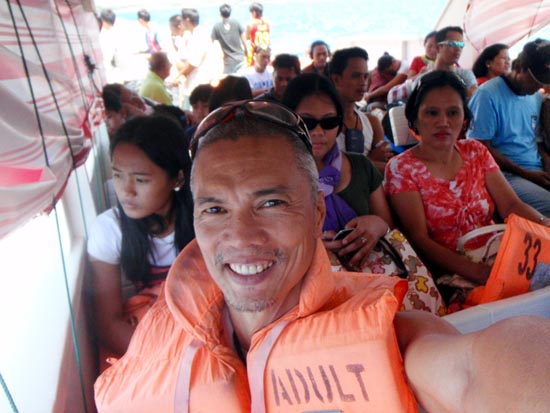 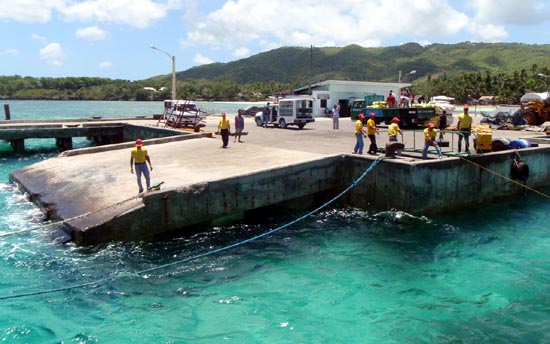 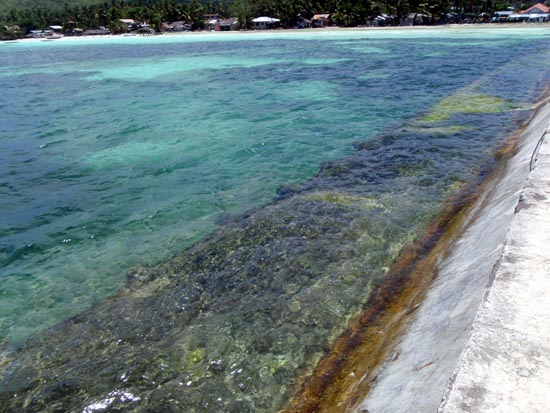 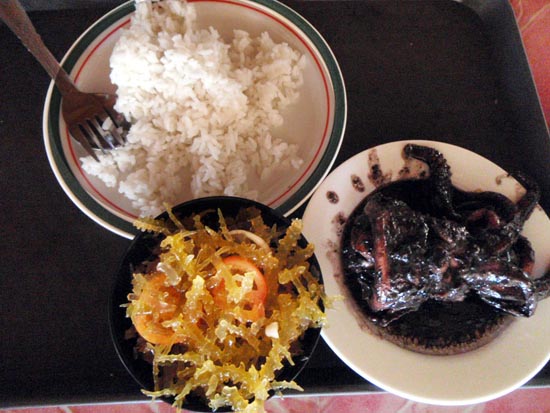 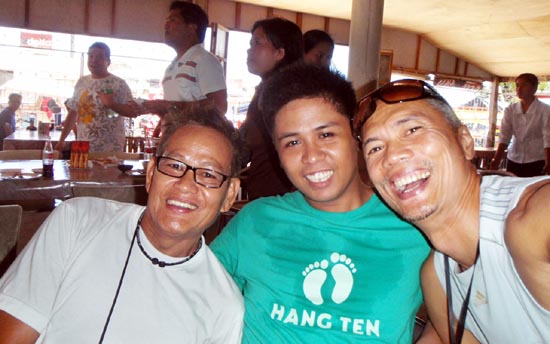 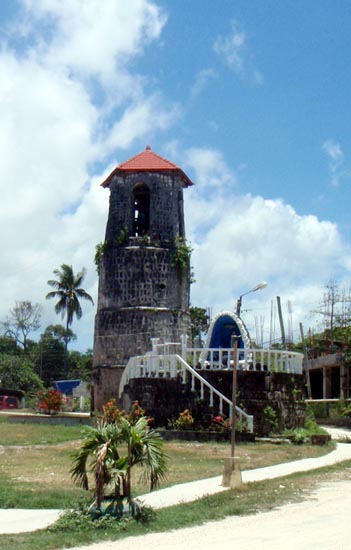 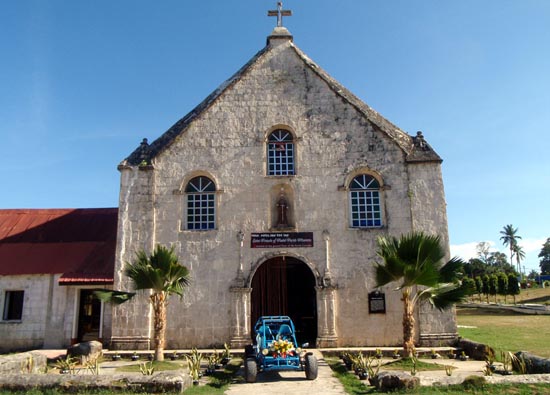 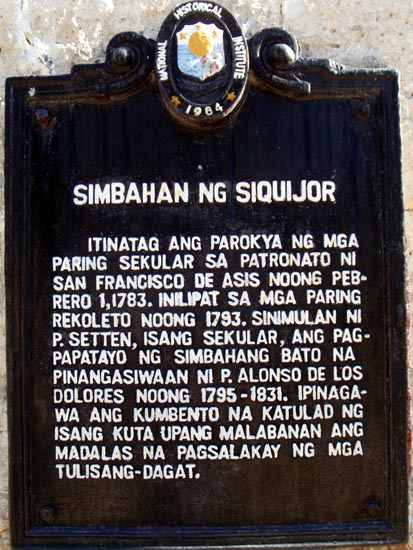 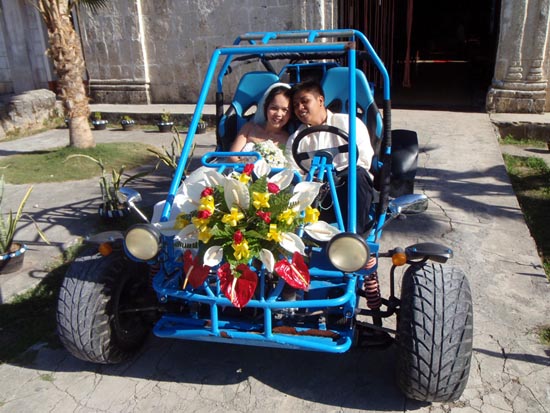 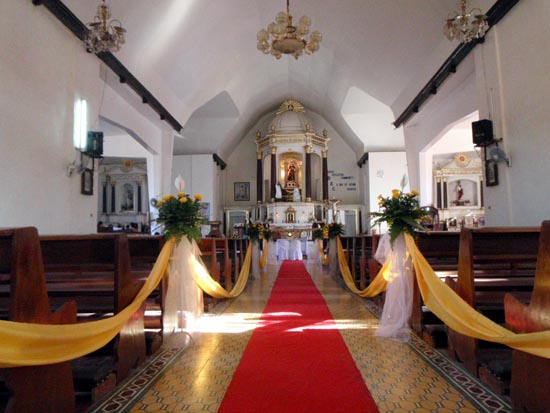 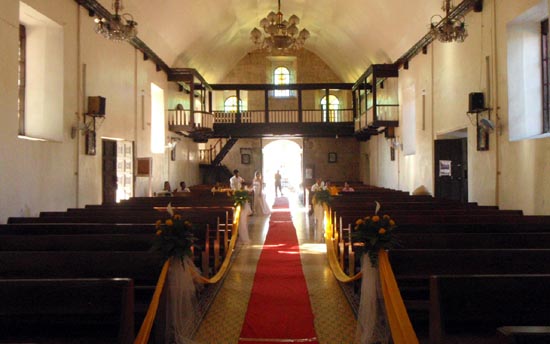 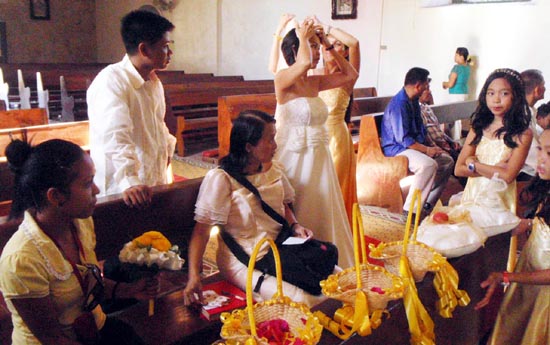 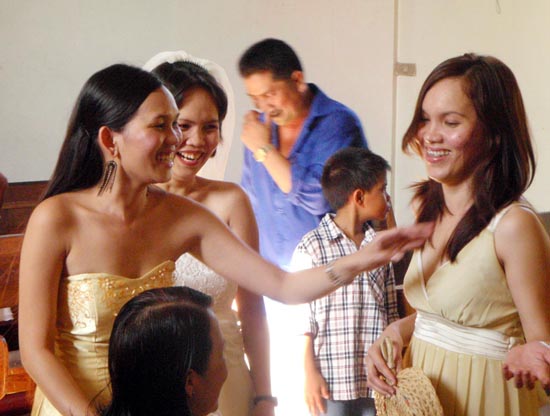 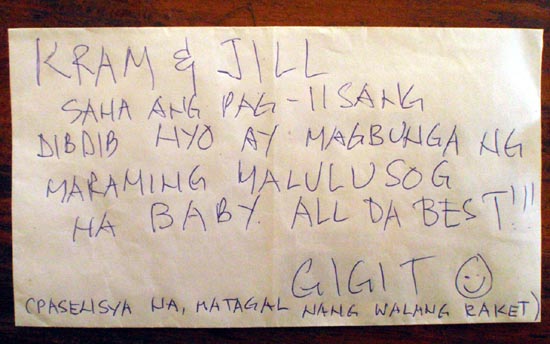 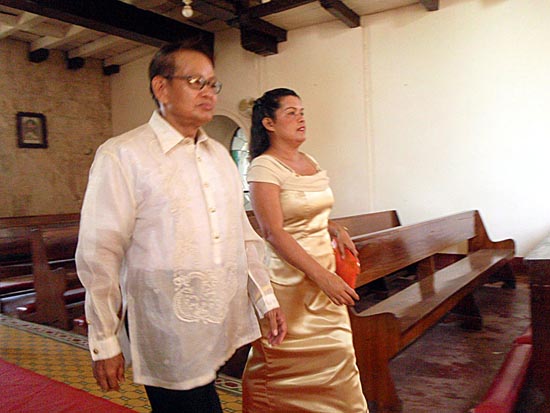 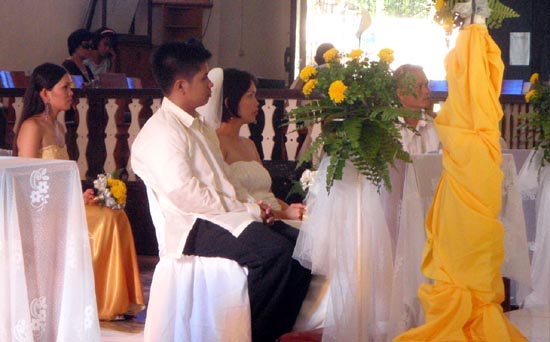 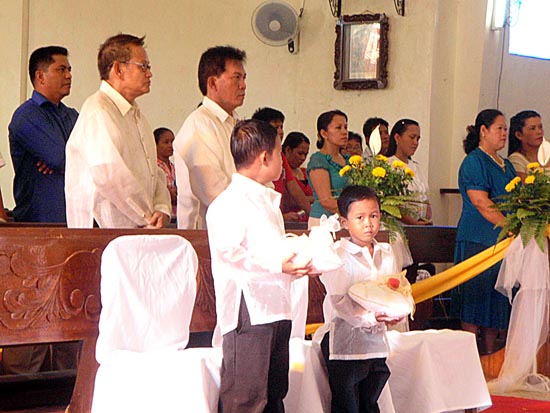 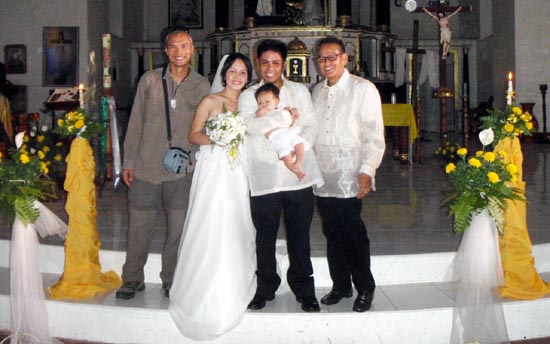 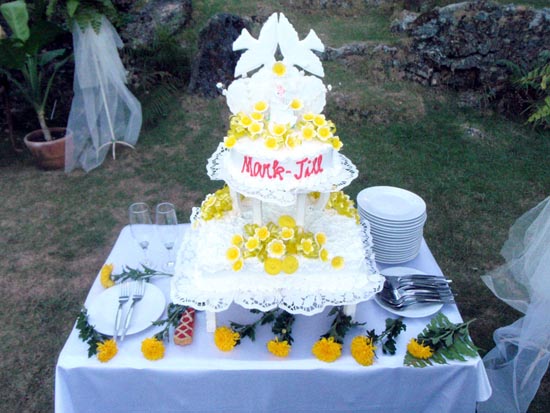 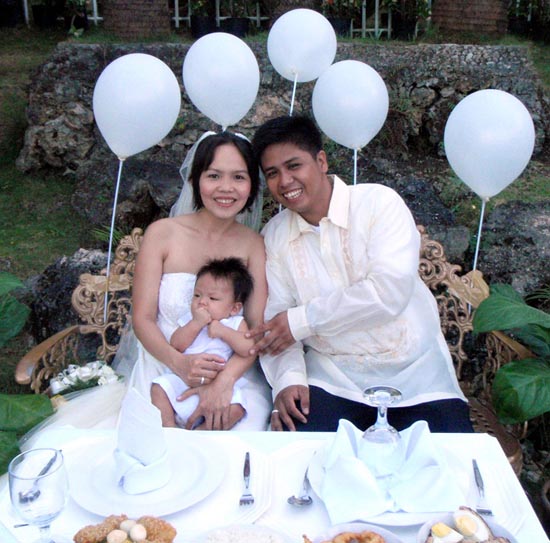 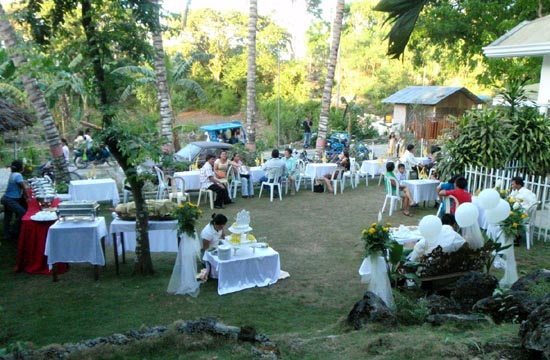 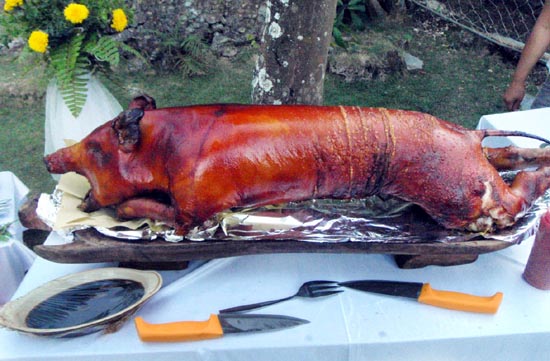 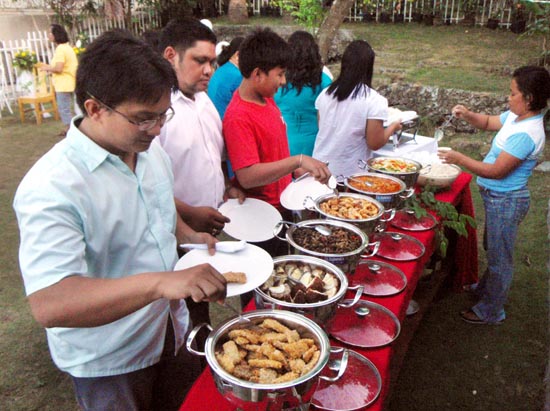 Looking for a Wedding Coordinator/Planner?:

(Apr 22, 2010) The following day after Kram's wedding, all first-time guests (including me), were taken around the island for a tour of Siquijor's wonders - from above the jeep...more »»

(Apr 23-24, 2010) Siquijor is located within the Coral Triangle - a dive area with the most marine biodiversity in the country. With 6 marine sanctuaries, and only 102 kms of coastline, everyone of them is accessible. Dive !!!..more »»