SUP in Loboc
I've done a few firefly tours on a pumpboat, but doing it on a paddle board at night along a river where our light source only comes from houses along the river bank? Trippy!!! It was something I had to try.

When it comes to being on an SUP in Loboc, I default to Fox and the Firefly. They offer SUP River Cruise tours and even SUP Yoga while drifting on a river!

Posse
We were a group of 3 Koreans, a Finnish couple and 2 tour guides. The Fins were capable paddlers but the Koreans were newbies. It wasn't a problem - we were going with the current and the river was so placid, you could see a perfect reflection of the trees on the river

Going with the Current
True enough, it was daunting being on the river bank at night. The river was wide and dark - I couldn't even see the face of the guy in front of me. Assured by the tour guides that it's safe, we all took turns mounting our SUP and paddled to the middle of the river. It was easy to acclimatize. After a few minutes, the dark became part of the ambience that only complemented the experience. Our paddling was more for steering direction rather than propulsion. The gentle current was just right. It was an ideal night for firefly watching - no rain, calm river, quiet evening and the stars were out!

Silent Night
The biggest difference to me about this tour is that you feel the stillness of the night with a paddle board. Usually on firefly tour, a pumpboat with its loud motor is used. This NEVER worked! In this tour, it was just me, my paddle board, the fireflies and all the stars above me - there was no noise jarring my senses. I couldn't ask for more. 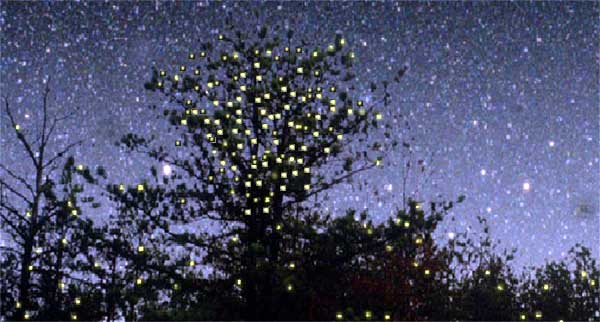 Fireflies
Finally, we came upon THE tree. It was one of many trees lined-up on the bank, but it was the only tree flocked upon by fireflies, it looked like a Christmas tree! It was mesmerizing to have that ringside seat and be a part of such visual magnificence. There was no wind but because the fireflies were flying and flickering at the same time, it gave the sensory illusion that the tree was swaying..almost like craddling you into a relaxing lullaby. Priceless!

The Pick-Up
Moving on, we continued our drift and disembarked at the pick-up point. The tour took about 75 minutes. The pick-up ride that was supposed to be there waiting for us wasn't there. It took a little waiting until it showed-up and took us all back to the resort.

Ending Thoughts
As an optimizer for the resort, I looked at what caused that delay in the pick-up and discussed it with the owner, together with my suggestion to prevent it from happening again.

Altogether, this has been a wonderful experience. I don't think any kind of firefly tour on a pumpboat will excite me ever again. Firefly watching on a paddle board simply brings together seamlessly, the stillness of the night and the visual poetry of the fireflies. If you get lucky enough, the stars will also be out and the river so calm, you'll clearly see your reflection on the water.

If you'd been to Loboc just for the boat cruise, here's another reason to come back.

(Dec 21, 2017) I was an impressionable high school kid when I saw this movie the first time. It blew me away in a very personal way. Breezy was iconic about the counter culture movement as it captured the spirit of the times. Being a hippie during that time was the coolest thing. I wanted to be a hippie, but didn't really have what it takes to be one or be seen as one. I see this movie again after all these years not knowing how I'll take to it this time.....more »»

»» next story: Breezy - Movie Review
»» next Traveling/Mountain Biking story: Mountain Bike Rides from Tagbilaran to Loboc
»» back to Traveling
»» back to Homepage