Looking for Blind Spots
Life continued at Fox and the Firefly Cottages with my single-minded focus on optimization. The resort already operates at a high standard with everything they do. I had to use a finer-tooth comb to uncover whatever blind spots there are. One such area is where my heart is - mountain biking

The Observer
Since I've already spent a full month in Loboc doing all kinds of mountain bike rides with Jeffrey and Juan, I was only keen on doing the same rides again but from an observer - in short, I'm not participating for the fun of it. I'd be vigilant at seeing how things work and fix what's broken and optimize the weak links.

Tool Kit
Before even getting on the bike, I inspected the portable tool pouch of the guide - it was almost complete except for a spare tube, air pump and adhesive for the patches. If there was a flat tire, they would have to call the resort for back-up. Given my background where I ride deep into the forest in the dead of winter where I can be 5 kms away from the nearest road, this practice was not acceptable. I prepared a list of 'to buy' parts which the owner quickly addressed.

The Bikes
The resort has a stable of six 29" hard tails (front suspension with 29-inch diameter wheels). For a public tour bike, I would say that these bikes are just about the best you could get. Usually, the bikes offered by an outfitter would be shitty. But these bikes are clean, lubed, tuned and fully functional. Even the Danish guests were pleasantly surprised. The owner is smart in not having the bikes rented out. The bikes can only be used for guided tours. This way, they don't get trashed.

Presta vs Schraeder
We would have left at 9am but had to wait for the earlier tour to arrive to use one of their bikes. Apparently one bike for our tour didn't have enough air. It had a presta valve and the only pump was a schraeder. It was that one inner tube out of 6 bikes that delayed Tour B. Instead of accommodating the presta (buying a separate presta pump), it made more sense to make this one tube, a schraeder. I requested the owner to add another schraeder tube making all the bikes schraeders. 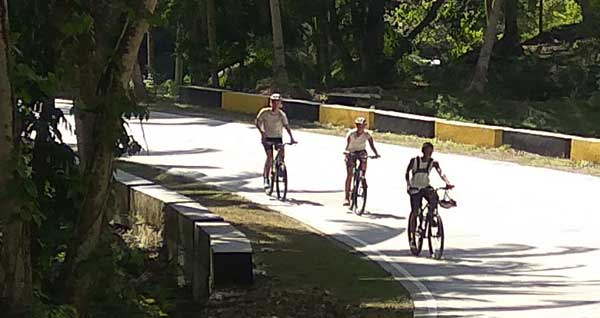 Mountain Biking Tour B
2 travelers from Denmark, Mads and Emma, who were strong riders signed up for Tour B - a 20-km intermediate level ride that includes moderate climbs and downhills. Teroy, the tour guide, led the way while I played sweeper (guy at the back making sure the group is intact). As sweeper, I can ward off any aggressive dogs that might spook the riders (but we didn't encounter such), see how the riders are holding up, observe the bikes' trail manners and see if anything falls off the trail.

We rode mostly on the backroads with a mix of dirt and paved trails cutting through several villages. Our mid-point rest stop was Limpia Beach in Loay. Heading back, we took a different back road where we ended up doing a canopy ride along the river bank - that was nice. We arrived at the resort hungry for lunch!

Mountain Bike Maintenance and Troubleshooting Workshop
I saw the need to conduct a maintenance / trouble shooting workshop for the 3 resort tour guides - they should be self-sufficient while out there without being reliant on resort back-up. It has already been scheduled end of week where we will do:

Tour Suggestions
The ride went well with no mishaps but I noticed that there was nothing memorable to it - nothing that was fun to talk about after. I would suggest a few things into the tour:

Ending Thoughts
While being observer and noticing so many things that could further enhance rider experience, I was amazed at how much I've cummulatively picked-up over the years from club races in Toronto, cycle mag subscription, Youtube tutorials and bike-outs with my mountaineer friends that were just coming out on-demand.

Additionally, by being an observer, I saw a different facet of the tour that neither the riders nor the tour guide were probably aware of. And that's cool. I'd like to think somebody was cleaning the ashtrays while they were partying.

(Dec 19, 2017) I've done a few firefly tours on a pumpboat, but doing it on a paddle board at night along a river where our light source only comes from houses along the river bank? It was something I had to try!....more »»