Keeping Green
At the outset, I am a conservationist. I'm all for a green planet. I do coastal clean-ups and do my fair share of addressing the garbage issue. But I may not necessarily agree with methods employed by green advocates.

The Ride
The biggest challenge getting there on my bike was still the heat. It was noon and the sun was blistering. It wasn't easy getting to Ubay Green Park. It's tucked-in into Ubay's remote interior with only dirt roads leading to it. There were not enough signs. If not for my Maps.Me app on my smart phone, I wouldn't be able to get there.

Park Setting
Upon arrival, I began to see what they've done. Plastic containers were re-purposed to be used as gardening containers for plants, decor and accents. Old tires were painted over with cartoon images to make it child-appealing. The landfill itself is a tall mound, about 3 stories high where a dirt road leads to its peak - a brutal climb on a bike. The peak has a tall teepee-like center piece and reused old tires making for park benches. It also offers a nice view. At night, it's a lovers' lane. 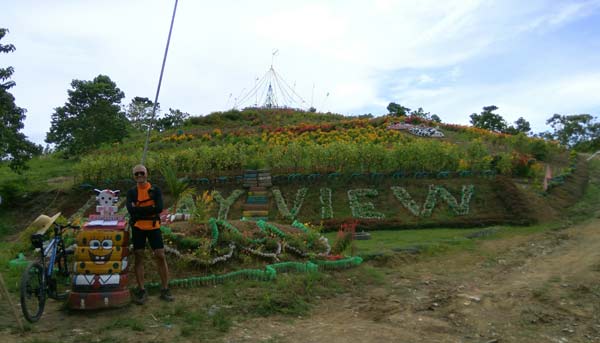 Ending Thoughts
I really appreciate the LGU's effort in highlighting the garbage issue - other municipalities would not bother. I like the way the old tires were made into park benches. I've seen pictures of wonderful tire-parks where innovative and creative ways to re-purpose tires were implemented. But somehow, I remain ambivalent about their means of addressing the small plastic. Creating a park with its colorful plastic decor instills a feel-good tap on the shoulder but I don't see any re-education or call-to-action to the end-user. These plastics as exposed to the elements deteriorate easily and disintegrate back into the environment. I would rather have them recycled at the outset and re-purpose them for something more pragmatic, like building blocks for much-needed houses.

I would also put the effort in educating people. My frustration in participating a coastal clean-up is knowing that I'm just on a vicious cycle - the trash throwers will continue throwing trash and coastal cleaners will continue to clean up their mess...and the process repeats itself with no end in sight. There is a compelling need to stem the dumping of garbage by educating and penalizing (and if need be) trash throwers.

For the householder (end-users like you and me), I would develop the focus of the park on 5 garbage issues in this particular order, with my own examples:

I'm just thinking aloud. I'm not an expert. I just want to share my experience and insight.

(Nov 18, 2017) Thank you so much for visiting GreenPark Ubay View Garden Sir. We will continue to do better and improve our area to become an educational center in the near future. God bless you.

(Nov 22, 2017) Cambugsay Hills is roughly 20kms from Ubay proper along the main highway going south to Alicia. From the top, it offers a scenic view of the Ilaya Reservoir (Mother Dam). You arrive at the park by the dam and trek it to the hills.....more »»