The Ride to Sinandigan Boardwalk and the Yamashita Treasure Hunt

Sinandigan Boardwalk
There isn't really a lot of note-worthy tourist attractions in Ubay. So far, the most promising I've heard of, is the Sinandigan Boardwalk - 3/4km of bamboo bridge on stilts across the mangroes that open up to the ocean. It's 10km away so it'll be a good saddle time for me as well.

The Ride
I started out at 9:30am on my bike and headed east on concrete pavement under the increasing heat of the sun. The road is hardly used so it didn't feel like I had to compete on road space vs big buses. It was mostly flat with a little hilly sections. The main challenge was really the heat. Despite my wide straw hat, it was still scorching.

Points of Interest
En route, I passed by the BFAR Multi-Species Hatchery along the coast. It aims to replenish the stocks of several species including the Blue Swimming Crabs, Red Snappers and Groupers. To rest from the heat, I stopped at a local beach resort in Sinandigan Beach. The beach was short with coarse brown sand. The water seemed rocky - you could see a few rock outcroppings from the surface. No, I didn't take a dip - but maybe I should have just to quench the heat. The owner was nice enough not to charge me for the use of the shaded table.

The Concrete Road
Finally, I reached the jump-off from the main road towards the boardwalk. The road was newly paved with concrete - impressive! It extended 3kms all the way to the start of the mangroves where the bamboo bridge begins. Where the good road ends is where the mystery begins.

The Rotting Boardwalk
The boardwalk was obviously neglected and left to rot. It wasn't usable. I tried to, but some sections had big gaping holes and no hand rails to hold on to. The flooring was suspect if they could still hold your weight or collapse. When a floor beam just collapsed on me, I decided it wasn't worth going all the way to the beach end. The concrete posts were already inserted into the hole but apparently not covered by reinforcement - as though the developers hurriedly left the place. In fact, at the end of the concrete road were still aggregates from unfinished construction - gravel, sand and more concrete stilts by their sides. It seemed like a scene from Twilight Zone. What happened here? 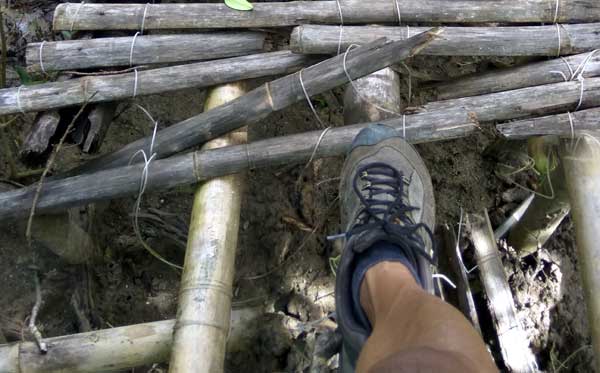 The Buried Yamashita Treasure Story
I've heard this story first in Ubay and one local in Sinandigan reluctantly nodded to it. The speculation goes that the group of Japanese developers who built the boardwalk project were actually treasure hunters. The boardwalk was simply a pretext for their treasure hunt to avoid suspicion. When they finally discovered the treasure, they took it and left the project dead on its tracks - which explains the state of unfinished disrepair.

Credibility Factor
I've heard so many buried-treasure stories in the Philippines to believe in one. Practically every town has a buried-treasure story. But this one has credence. First, it was a group of Japanese who initiated and funded the project. Why Ubay when it's not even on the tourism map? Secondly, why was construction of the project suddenly halted and the Japanese developers left without completing it? The turn of events simply added fuel to the speculation. In fact, my lingering thought is, just how big was that treasure to warrant a 3km concrete road construction?

Work Resumption
Now, the locals claim that work resumed, but none really volunteered the Yamashita treasure story. But now, it's the local government resuming the work - the Japanese are all gone. Now this makes sense for the LGU. Since the Japanese already forked-out most of the money for the project, why not complete it using tax-payers money and make a tourism attraction out of it? But seeing how dilapidated the bamboo bridge is, it will take a lot of work and time to finish it. I wouldn't plan on making a visit just yet if I were you.

Ending Thoughts
Okay, this trip turns out to be a dud. But hey, it wasn't all bad. I got my bike workout and I got a catchy Yamashita treasure story! When you travel, it's not so much the destination but the journey.

Lars Jensen
(Nov 18, 2017) I'm the guy you met by the boardwalk today. I would like to show you a couple of places I find interesting, one of which is Cambugsay Healing Hills, a place good for hiking or biking. If you are interested contact me, we can meet on the bikes or I can pick you up in a car.

(Nov 18, 2017) Ubay Green Park is a former landfill turned into an eco-park re-purposing plastic as part of its decor and attraction....more »»