SUP Yoga on a Drift
I've played around with SUP yoga on a static pool and attended an SUP Yoga class in Plantation Bay, but here in Loboc, SUP yoga is offered by SUP Tours Philippines along the Loboc River as you drift downstream on the current. Conducting this class was Joan Christine, a registered Sivananda yoga teacher and ASI supyoga instructor.

The Orientation
Before we even got on the SUP, Joan gave us an orientation on how to manage ourselves on the SUP - where to position ourselves, paddle length, how to paddle, how to fall, how to get back on the SUP, etc. That alone gave us increased confidence.

The Session
We were 5 students altogether with our own SUPs all tied-up together in a petal-formation to keep it from drifting away from each other. Before Joan started the class, we were already drifting which added to the excitement. Following heavy rains, the water level was high and it was also high tide which accounted for a stronger current. If that wasn't cool enough, it even rained! Woohoo! The entire session was gentle yoga with easy poses for easier balancing. Most of the time, we were either seated, kneeling or flat on our backs or tummies. Standing poses, which increases center of gravity, were few and far in-between. Towards the tail-end of our drift, we got into our own inversions. It wasn't about perfection but about trying our best and having fun. 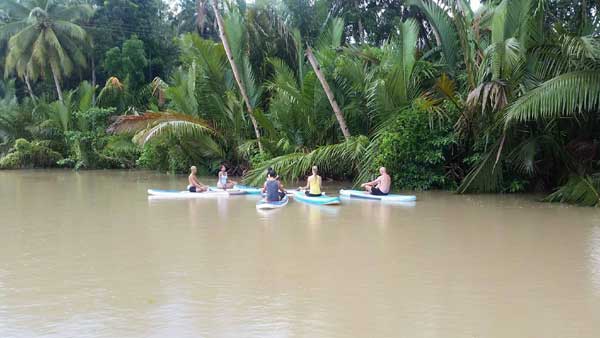 Challenges
There were a few minor challenges. Sometimes, the current would take us close to the river bank where leaves would already brush on our shoulders. As sweeper in mountaineering climbs, it was second nature for me to take the paddle and clear us from the trees and leaves as the yogis continued with their poses (aka, cleaning the ash trays while they party). When we got rained-on, it got cold. Whatever body heat we were mustering dissipated into thin air. But the rain was fun too!

Ending Thoughts
I don't think SUP Yoga can substitute for a serious and deepening yoga practice on a mat, but it's certainly fun and a novelty. After doing SUP Yoga on a river drift, I don't think I can still enjoy doing the same thing on a swimming pool. Even if you're a hardcore yoga purist, I would still suggest you lighten up and take up SUP Yoga on a river drift - it'll be a refreshing diversion from the usual. You'll be glad you did!

Thank you Frederic and Joan for the memorable experience!

The Return to Hinagdanan Cave

(Nov 5, 2017) The first time I visited Hinagdanan Cave with Juan, we didn't get to swim. This time around with Jeffrey, Juan's son, and RJ, we came prepared with swim wear and snorkeling gear..more »»

»» next story: The Return to Hinagdanan Cave
»» next Yoga story: In-House Yoga Teacher at the Fox and Firefly Cottages
»» back to Yoga
»» back to Homepage