Malay Attractions
Caticlan has always been known as the gateway to the world-famous Boracay Beach. But a closer look at its municipality, Malay, brings the spotlight on the many ignored attractions overshadowed by Boracay. But Boracay has been done-to-death and Bora-denizens are looking for something else to do while in the area. It's ironic that such places are just under their noses.

Hot and Dusty
Coming from Nabas into Caticlan by jeep, I got off on a dusty main road. The whole town is on a frenzy with activities in support of what's happening in Boracay. Aside from the dust, it was hot and muggy - a sensory overload for someone who just arrived and in search of a place to settle. 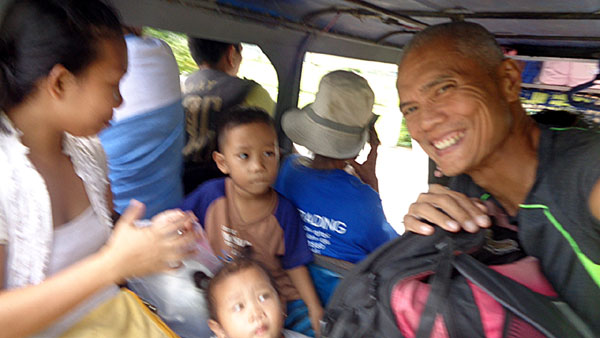 to save money, I don't charter a tricycle...I huddle myself with locals and pay local fare!

S-E Hotel & Residence
I visited a few hotels until I came upon the S-E Hotel & Residence across the street from the end of the airport runway. Stranded? This is the ideal hotel - you just walk it to the airport! After talking to the owners, I ended up staying there for the days I'll be in Caticlan, Malay. My room had all the comfortable amenities sheltering me from the heat and dust - a/c, internet, tv, ensuite and a balcony overlooking Boracay on the other island. It was my oasis.

El Cielo Hotel
Surprisingly, I met the owners of a previous hotel I visited (El Cielo Hotel), a lovely couple, who were interested in my internet service. After a few talks, we have become friends in the process. They invited me over for breakfast at their place. We didn't even talk business - just spontaneous conversation on what's compelling. I felt good about that. They seem to be people I can work with in the years to come. El Cielo Hotel is in a handy location - walk to Jetty Port, walk to market and walk to the airport as well.

Ideal Base
Caticlan is always busy with buses and loads of people coming in and out of Boracay. It's really just a support point-of-entry for Boracay. I walked around Caticlan, visiting the market, the Jetty Port...not much really here in terms of attractions. But as a base to explore the many wonders of Malay without going to Boracay, it is ideal. I'm right on the highway with access going south to Iloilo or west, going to Malay town proper and Buruanga.

7 Wonders of Malay
Having settled at S-E Hotel, I now begin my exploration of Malay...and nearby places. Malay's tourism boasts of the 7 Wonders of Malay. Who's heard of that? Not me. Boracay takes center stage. But having just spent time in Boracay, I can explore these wonders without being distracted by Boracay. First on the menu....Pangihan Cave!

Visting Pangihan Cave of Malay
(Dec 14, 2016) Pangihan Cave is right smack within the Malay Poblacion. It has 8 connecting chambers although the guide with only take you to 2 bat-filled chambers. It is muddy with stone steps but has no subterranean stream. Total length is 275 meters with stalactites and stalagmites.....more »»

»» next Traveling story: Visting Pangihan Cave of Malay
»» back to Traveling
»» back to Homepage