Kalibo Curve Ball
Kalibo was not in the plan. From Caticlan, I was to go to Buruanga as a final destination in covering the North West Panay peninsula. But my shoes fell apart. I didn't want to explore caves and waterfalls on flip-flops. Assured I'll get Merrell shoes in Iloilo, I boarded the bus. But when passing through Kalibo, I just got off the bus - it just felt right, even though shortly after, I was caught in the driving rain with a leaky umbrella with all the heavy backpack behind me. What the heck am I doing here?

Merrell Shoes
It seems odd that I would forego my Buruanga plan to go buy a pair of shoes in Kalibo, 2 hours away! But I wanted Merrell shoes. It's comfortable and lasts me about 2 years with everyday use. At Gaisano Mall, I saw a section of Merrell shoes and got one on a 20% discount - P3350! Yey, my socks don't get soggy now everytime it rains!

Marzon Hotel
While at Gaisano Mall to deposit my heavy luggage while I look for a hotel deal, 2 locals suggested Marzon Hotel. Failing my initial tries to get a deal close by and almost drenched in rain, I made the trip to Marzon Hotel. It felt right being there. Talking to the manager brought us to common grounds. Even if I didn't get my terms, I shook hands with them. It would have been utterly arrogant to walk away from it after being taken there - like I said, I wasn't even supposed to be in Kalibo in the first place. At the end of the day, I was resting my weary back on a very comfortable bed in an elegant room in a wonderful hotel. I'm glad I trusted my instinct. 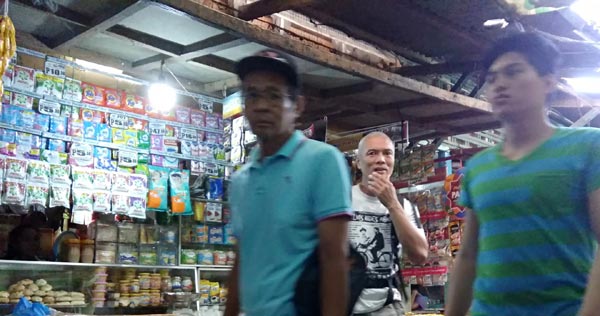 photo bombed at the public market

About Town
Kalibo is big so it's not possible to take a leisurely walk to see the whole town. There are no jeeps plying the inner town. The transport mode is a tricycle starting at P8. Because there is no mass transit, the tricycles swarm like flies, clogging main arteries and causing traffic. They have 2 malls - the ageing but popular Gaisano Capital and the new, small and modern City Mall. For trendy cafes, there's Latte Cafe and Cafe Sicilia - just to name two, but there are a few others. There is a McDonalds, which is a usual benchmark on how big/progressive a town is, but no, there is no movie house (another litmus test).

Increasingly, I find the rarity of a movie house in a big town. Perhaps it's because pirated DVDs are so cheap, and also, movies have become so expensive - at least for the minimum wage earner. I remember the time when I was in high school, movies were cheap, I could see one everyday. If I do that now, I'd go broke.

Overtime Music Bar
Close to the hotel was a music bar with a live band. It was popular with the young locals - nothing fancy but not a dive either. The band played good music. It's been a long time since I had a night life. It was a relief and it felt good. I ordered a cold beer and huge platter of oysters. When I got the check, I was dumbfounded! Live music, cold beer and a huge platter of oysters for.....drumroll please, P83.00!!!!! It wasn't until the following day when I told someone about Overtime and the remark was, "...good thing a fight didn't breakout while you were there."

Market Scene
A walk around the market didn't reveal anything unique from the usual wet market in the Philippines. The place was a good size, organized, clean and a bit crowded. I notice they sell the big sea weed (lato, P160/kilo) which I only saw in Surigao. I had a good helping. Seaweed is the only vegetarian seafood you can get.

Plaza
Similar to Luneta, they have a sizeable park, the Pastrana Park, across the street from the cathedral. At night, the locals hangout there for chills and eats. That night I went, a bingo event was happening with a P5000 grand prize - good turnout of people. I guess the park and the surrounding area is what they call "Plaza".

Ending Thoughts
Kalibo is somewhere between a big town and small city with a disproportionate share of tricycles that dominate the roads. The people are still friendly and cost of living still within bounds. With its most popular tourism draw, the Ati-Atihan, coming closer, already the air is rife with preparation. I could stay a little longer, but somehow, the die is cast for me to pack-up again and move on south.

Visiting the Bakhawan Eco-Park of Kalibo
(Dec 18, 2016) The Bakhawan Eco-Park in Kalibo is a perfect template on how to deal with the country's mangrove forest. By planting mangrove trees back in 1990, what was once a muddy flat has become a thriving habitat for birds, crabs and fish. It opens up to the sea with a resto deck serving tamilok...the worm inside rotting wood!....more »»

How to Get to Kalibo

Kalibo is still inexpensive and the dollar goes a long way specially with food. Lodging though, compared to Cambodia or Thailand is expensive.

»» next Traveling story: Visiting the Bakhawan Eco-Park of Kalibo
»» back to Traveling
»» back to Homepage