Editha's Southsea Holiday Houses
I would have already left Moalboal after my 30-day room rental in Poblacion, but I passed by this manicured row of houses by the sea in Tongo. After proposing to the owner what I can do for her on the internet in exchange for a 10-day stay, we shook hands on the deal - thus my Moalboal chapter found another 10-day extension.

Where I stayed was not just a room but a full house - dining area, living room, kitchen, 2 bedrooms, front porch and a balcony! There is even a common spacious alfresco hut hanging by the water on concrete stilts. Location was ideal for any long-term tenant - it was quiet but just a short ride away from the party scene of Panagsama.

This also allowed me to extend lodging invites to friends.

Yoga Teacher
I'm glad that with my presence and place to stay in Moalboal, Jeanne and her Cebu City friends defaulted to Moalboal. Their visit would be a highlight for me. Often, I would take one on a drift-snorkeling along the drop-off where they could see sea snakes, turtles and more marine life. For someone who hasn't done any kind of snorkeling, that would be a homerun!

Game of Thrones
Often, I would default to 3 Crowns Resto at Poblacion for pizza, wifi and air-conditioning. I would normally end up just downloading Game of Thrones episodes...or GOT Rewind (compilation of scenes by one character throughout the entire series). Game of Thrones sets a new benchmark in tv series programming. It's rare that a tv series grips the global stage and have everyone talk about it with giddy excitement. This last season though is plagued by too many implausibilities to make it believable. Still one of the greatest shows, if not the greatest.

Bitcoin
I also used the time in Moalboal to learn more about Bitcoin. It's not easy understanding the nuts and bolts of Bitcoin - hard forking, Bitcoin Cash vs Bitcoin Legacy, offline wallet vs online wallet, etc. Its value has skyrocketed with dizzying speed. When I opened up a Bitcoin account last year, the value was 1 BTC = US$624. As of this writing, 1 BTC = US$4,750! Had I had money when I opened up the account, I would have purchased as much as I could instead of just a token purchase. I'd be rich now. With increased speculation about Bitcoin, increased consumer use and adaptation, Bitcoin can only go up in price in the long term.

Bicycle
My mountain bike was a great help specially when I stayed at the remote Edith's Houses. I could come and go anytime as I please without any reliance on the expensive tricycle rides - specially at night. The only downside was when I had to leave Moalboal. I could not possibly carry all my heavy and bulky bags and still bring a full bicycle with me. To address the issue, I had to make a special trip to Cebu City just for the bike. That was a lot of trouble!

Ending Thoughts
After almost 2 months, I finally had to bid Moalboal goodbye. I clearly overstayed. Without much happening to me, I should have left much earlier. Instead, I just got sick and languished. Life on the beach where the sardines run wild and free, where turtles are an integral part of the seascape and where diving is at its best, finally came to a close. It has been a great run but it's time to hit the open road once more. At this point, any place but the beach.

(September 4, 2017) Fritz takes us on an insightful journey with parent's lenses on how to best prepare our kids for life (not just for travel). It's an engaging narrative full of mindful observation about how kids see the world around them and how we, as over-protective parents, tend to anaesthetize their experience by being too careful. Fritz has a tendency to say in 10 words what can be said in 4, but it helps underscore his point.....more »»

Goodbye and Thank You, Ubay

(Nov 14-Dec 13, 2017) After 30 days, it was time to pack-up again for a new destination. This traveling format has been challenging with Ubay. I would have left much sooner if not for my 30-day constraint. I didn't really meet anyone, it was always hot, humid and dusty, their attractions are not really noteworthy and there isn't really a comfortable hang-out place. What exactly did I come away with?....more »» 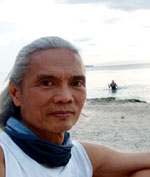 (Dec 4-9, 2022) I really had no plans for Moalboal. But somehow, my snorkeling gear which I haven't seen in 5 years were returned to me. Then my friend from Chiang Mai, Elizabeth, scheduled a trip to Moalboal to get her Open-Water Certificate. My only reply to her was, 'Let's travel together.' Thus Moalboal revisited...more »»


»» next story: Travel Parenting by Fritz Blackburn
»» next Goodbye: Goodbye and Thank You, Ubay
»» back to Traveling
»» back to Homepage