Yoga Quest
Ubud is not only the cultural capital of Bali, it is also the yoga Mecca. The place is rich in art, cultural events, spas and yes, a generous sprinkling of yoga offerings from home studios to lavish yoga resorts. In my quest to try out the yoga studios in Ubud and experience the different styles of yoga offered, I ventured into an off-the-grid ashram in Nyu Kunin area about 4kms from the Ubud town center, called Taman Hati Yoga Ashram. 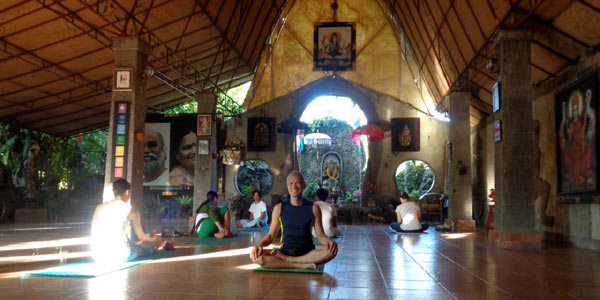 at the Taman Hati Yoga Ashram

Taman Hati Yoga Ashram
A shortcut to Taman Hati from Ubud town center is to go on foot or bicycle around the Monkey Forest until you end up on the back side of it - you're now in Nyuh Kuning. The ashram was established in 2002 and located within a quiet residential neighborhood in the upcoming trendy area of Nyuh Kuning where chic restos and touristy warungs are mushrooming up. The yoga studio is unusually huge with a high ceiling and alfresco walling. Frequented by locals with a few foreigners, it's one of the least commercial of the gamut of yoga studios in Ubud. There is also a Myna bird who perfectly mimics the laughter and even voice of the teacher, I Ketut Bandiastra, S. Ag.

I Ketut Bandiastra, S. Ag
Ketut is a son of a Balinese priest and hails from Ubud. He has traveled the world in the course of his teachings. The class I attended was mostly locals with a handful of foreigners. Locals pay by donation while admission for foreigners is IDR 100k. Ketut conducted the class mostly in Balinese with a few sprinkling of English, Japanese and French lines. He has an infectious laughter and smile. He carries himself lightly and exudes an aura of Hakuna Matata, "don't worry, be happy" - a very good embodiment of the Balinese demeanor. So far, in my limited experience in Ubud, I can say that this is the only culture I've seen that makes a conscious effort to be happy and in fact, celebrates their happiness! In his cuing, he generously throws-in the words, 'happy', 'sexy (but in a good way)' and 'smile'. While light-heartedly said, in his cuing, he also underscores that divinity resides within us - something that resonates highly with me. He comes across as a teacher you want to have a fun time with after the class (instead of being worshiped).

Pranawayu Yoga
Pranawayu Yoga is a unique sequence with a Balinese Hindu flavor as developed by Ketut given his background in Kundalini, Ashtanga and Iyengar yoga. It has a specific set of asanas done in precise chronological order. The asanas are essentially the same as Hatha yoga but the sequencing is gracefully elegant, unique and challenging.

Akiko Abe
In all of this yoga quest, Aki has been the surpring curve ball. I met her while looking for Teacher Ketut. She is a yoga teacher from Japan and devoted to deepening her yoga here at Taman Hati, going through lengths of devouring even the Yoga Sutras of Patanjali. According to her, she has tried many teachers and many styles but Pranawayu Yoga is a good match for her. She has a strong practice. Our friendship is an unexpected Easter Egg I found along the way.

Ending Thoughts
Pranawayu Yoga has one of the best sequencing I've ever experienced. With my strength coming back (from a month-long hiatus from yoga), I managed the asanas which were both challenging and artistic. The transitions were intelligent and intuitive as well. It felt like a well-orchestrated movement through space. Like Ashtanga and Sivananda that has a prescribed set of asanas in regimented chronology, so is Pranawayu. A sequence as gracefully articulated as this deserves its own name. Pranawayu Yoga!

Teacher Ketut, thank you so much for sharing the magic of Pranawayu Yoga with me. A year ago, I started developing an advance sequence combining the many elements of bandha, pranayama, kumbhaka into a series of asanas woven together into a seamless meditative vinyasa...but somehow left it unfinished. You give me inspiration to complete it.

Thai Plum Village
(Sep 29, 2017) Thank you for the amazing recommendation...he (Ketut Bandiastra) remembered you right away! Sends his kindest regards. Challenging class yet happy and light with his encouragement and banter. I intend to get in one more class before leaving next week.

(July 18, 2016) Thank you for introducing Taman Hati to me. That's probably the best yoga I have ever attended. I'm going to Ketut's class tomorrow morning again! He's so funny! Haha! I enjoyed the entire process!

(July 9, 2016) Thank you for sharing Gigit - I will definitely give it a try next week!
(July 11, 2016) The class was fantastic, I'm coming back tomorrow!! Come tomorrow morning for yoga at 10am for practice :) happy lungs happy chest happy sky

TheLoneRider
(July 31, 2016) Teacher Ketut, I am sorry I left Ubud without saying goodbye. I left in a hurry, one day ahead of schedule when I found out there was a cheap flight out of Ubud just a few hours away. I want to thank you for the wonderdul Pranawayu Yoga experience. I still talk about it to my yoga friends and tell them not to miss your class if they visit Ubud. Take care Teacher! I hope to see you again when the wind takes me back to Ubud :)

»» next story: Visiting the Elephant Cave (Goa Gajah)
»» next Yoga story: Yoga Pranala with Chiara at Intuitive Flow Yoga Studio
»» back to Yoga
»» back to Homepage