e-VISA
I prepared for my entry into India by reading blogs about getting a tourist visa - they all said I have to get an e-VISA, that visa on arrival is no longer in place. Thus I went to the link and filled-in the form. It was lengthy, but pretty straight forward. The only odd thing I noticed was in the "Port of Arrival", only airports were listed. The Sonauli border crossing was not on the list. This should have been a RED FLAG already. But no, I rationalized that of course, given all the point of entries, it would be too many to put on the web. Since I planned to stay in Varanasi, I just entered "Varanasi Airport". This assumption caused me a lot of grief.

Nepal Immigration
From Lumbini, it was only about an hour to the Sonauli border crossing. I was on the first bus at 5:30am all packed-up and ready for India. Before crossing the border, I even exchanged nearly all my Nepali Rupees into Indian Rupees. At the Nepal Immigration where I had to get my departure stamp, I showed my Indian e-VISA application approval. To my surprise, he said e-VISA is only for airport crossings. My e-VISA would not be accepted in Sonauli and that I should go back to Kathmandu and take the flight instead.

I was shocked! I pleaded to be allowed to cross the border and talk to the Indian Immigration if they could reconsider. He could just have said no, but told me to talk to the Nepali border guards instead. The border guards were surprised at my request - it was out of the ordinary. I was respectfully persistent. After being referred to the major, a Nepali immigration officer was asked to escort me across the border and into India to talk to Indian Immigration. 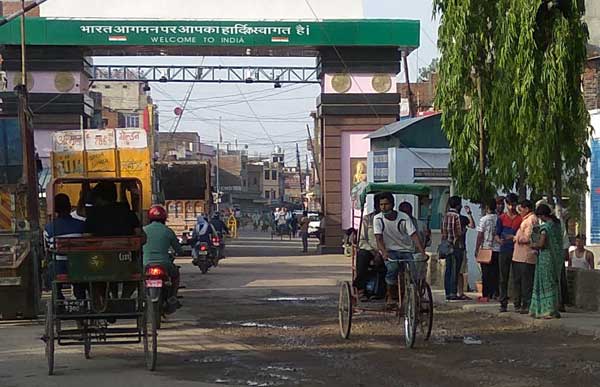 India Immigration Snag
India Immigration said they could not help me. They don't even have the scanners or computer system to validate my e-VISA. Like the Nepal Immigration, the India Immigration told me to go back to Kathmandu to take the flight to India, or apply for a sticker-VISA to allow me to cross by land. There is such a thing as sticker-VISA? At that point, I knew I had to go back. There was no way I could talk them into allowing me to cross the border. The Nepali officer escorted me back to Nepal.

Frantic Troubleshooting
I went to a resto for the internet - it was my remaining life line. I checked for a nearby airport, but no flight to Varanasi. Besides, flying is expensive! I don't have that in my budget. After more internet work, I also found out that there is no direct flight to Varanasi from Kathmandu either! I already booked my room in India - I cannot get refund for those. Having changed nearly all my money into India Rp, I don't have money now back to Kathmandu - I had to change some money back to Nepali Rp!

I was screwed and my world started imploding! I had to collect myself. First, I had to go back to Kathmandu and objectively think about my options.

En Route to Kathmandu
The only bus available at the border was a local bus. It was cheap (NPR 500) but you take a dust bath with all the delays. It wasn't worth it, but I had no choice. We left at 9am. It stopped a long time on all bus terminals and picked-up every passenger along the way. Traffic was also horrendous - even on the narrow mountain roads! It was already 10pm when I reached Kathmandu. I'd been on the bus 13 hours!

A Place to Stay for the Night
I was tired and sleepy but still had no place for the night. I walked through the dusty road with my heavy baggage towards Thamel until I came upon a resto with a wifi. It was close to 11 at that point and they were about the close. Thinking fast, I made my online booking based on proximity and price. I found a dorm bed at Hostel Travelers Hub at $4/night - about half a km away. This time around, Kathmandu wasn't fun. I barely recovered from its dust from my last visit, and here I am again ingesting its insidious dust.

3 Days in Kathmandu
First things first when I woke up. What exactly are my exercisable options?

New Delhi Route
Weighing everything, I decided to go for the New Delhi landing. To clear the issue, I went to the Embassy of India and to the e-VISA office but both of them couldn't help me. They were tossing me back and forth. I was surprised. I only had a very simple question: "in my e-VISA application, I stated that my entry is Varanasi but in actuality, it will be New Delhi. Will this be a problem?". Frustrated, I emailed (again!) the e-VISA office who never gave me a clear answer to this question either. Fortunately, they gave me a speedy reply stating that it was ok to land in New Delhi. Whew! Now, I can move on to the next steps.

New Delhi Preparation
I now had to line-up my course of action for a new destination - New Delhi! All that work pretty much ate up my Kathmandu time.

Selinaa Sella
I was supposed to meet a German traveler in Kathmandu who just arrived from the Philippines - Selinaa. We were hooked up by Jim, a cyclist/Buddhist friend from Baguio. It would have been a great thing to be hanging out with someone in Kathmandu, but even that didn't happen. Her schedule was too tight and so was mine. It was a meeting we both agreed to happen at a different place and time if fate allows.

Krishna Thakur
On the long bus trip, I got into a conversation with a soft-spoken Nepali who has done many Vipassana meditation sits. Naturally, we bonded instantly. Despite his rudimentary English, we managed to keep the conversation going. Increasingly, I keep meeting Vipassana meditators along my travel. This is a very good thing.

Nirdesh Acharya Dixit
Being in Kathmandu, I had to stop by Mo:Mo la Palpasa Coffee to say Hi to Nirdesh - a friend and the cafe owner who envisions his cafe as a social enterprise. He is a smart well-educated guy whose heart is in the right place. Too bad Patrick wasn't there anymore to join us.

Ending Thoughts
Realizing that I couldn't talk my way into the Indian border and that I have to go back to Kathmandu again, I really felt the grit of a backpacker life where the best laid plans could be thrown out the window over what seems like a little oversight. All the meticulous planning and research I've done for Varanasi - routes, bus or train, transport from terminal to hotel, paid hotel booking, all that effort and expense had to be thrashed. But that's essentially what life is all about - no guarantees. You simply have to do your due diligence and expect the unexpected.

Lalah de Dios
(May 11, 2018) Another lesson again on detachment. Thank you for sharing your journey 🙏

TheLoneRider
(May 11, 2018) ...many lessons - detachment, composure, fast-thinking, resilience, heeding red flags, etc. The damage was far from catastrophic but lessons learned are priceless. Another animated slice of life 🙏

Next stop: A First-Timer in New Delhi, India

»» next Traveling story: A First-Timer in New Delhi, India
»» back to Traveling
»» back to Homepage