Cave of Lord Shiva
After visiting Devi's Falls, I just crossed the street to visit another tourist attraction, Gupteshwor Mahadev Cave. This cave is sacred to the Hindus because they claim that the natural limestone formation inside the cave resembled their deity, Shiva. 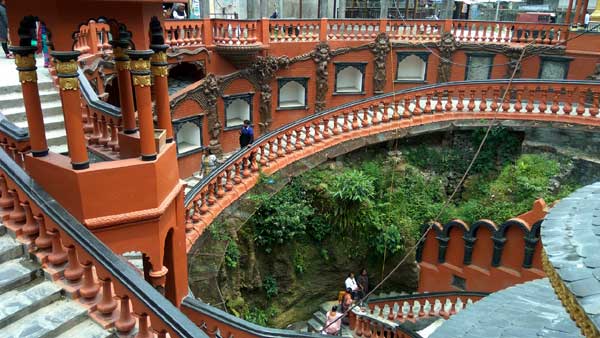 Gupteshwor Mahadev Cave
The entrance to the cave is an impressive spiraling staircase that takes you deep into its caverns. The rest of the way is a tourist-friendly walkway but you still have to duct on some sections. The passage can be narrow that opens up to a cavern. At one point, there were scaffoldings inside in what resembled like the inside of mine. Further walking through us me to the dead end where you see a slit in the rock formation revealing the water coming from Devi's Falls.

Going Back to Pokhara
Pokhara was a manageable walk away, but I wanted to see if it's doable to take the public bus. I asked around and was told to take the green bus to a roundabout (5 mins, NPR15), afterwhich I transfered to a white van up to Lakeside (5 mins, NPR20). I got off in the heart of Lakeside Pokhara. Cool!

Next stop: Storming out of Dhamma Janani on the 4th Day

»» next story: Storming out of Dhamma Janani on the 4th Day
»» back to Caving
»» back to Homepage