Go to Pokhara!
I would have used-up my entire 30 days in Kathmandu for a mini-life, but the dust got me sick. I had to leave. One traveler told me, I had to go and see Pokhara. That was it! I booked 2 nights for the cheapest lodging I could find ($4/day) and took the bus for the 9 long hour trip, not knowing what was in Pokhara. 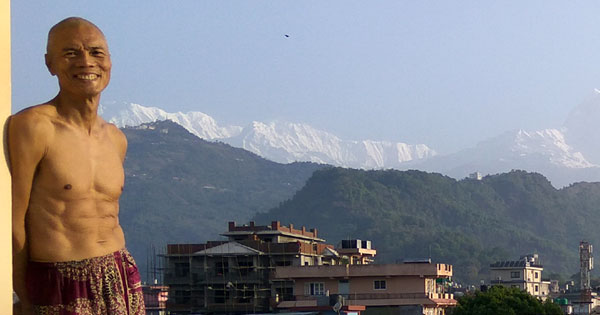 Annapurna Himalayan Range
Except for the noticeable pleasant cool climate, the first day in Pokhara was just a blur trying to settle down. But on my first morning, I woke up and saw the snow-covered Annapurna Himalayan Range on the backdrop. It was spell binding! It was one of the most fascinating view I've ever seen...green mountains on the foreground and snow covered mountains in the far background. The staff told me it was the first time in 3 weeks that the fog lifted, revealing the Annapurna mountain range.

Trendy Shops and Restos
Walking along the chic streets of Pokhara, specially the Lakeside section felt a little like Ubud, Bali. Trendy cafes, restos and hotels lined up the streets. It was a big section that offered a wide array of eclectic shops. Travelers promenade the streets with cafe denizens doing people-watching. Unlike Kathmandu which had a frenetic feel to its busy local on-goings, Pokhara had a leisurely pace with a quaint ambience. In the evening, the popular restos and bars get full - it would seem like all the travelers come out at night.

Budget Living
Cheap dormitory beds could be had. After 2 nights at my first lodge, I moved to another place who matched the Agoda price of US$3/night. This way, I could pay the NPR equivalent without the Agoda surcharges and taxes. At this rate, I'm not pressured to make a hotel barter deal. Cheap but nutritious meals could be had for less than US$1 where locals eat - vegetable thukpa, mo:mo, chowmien, etc. I wash my meals down with US$0.20 milk tea. I could live here!

Decadent Breakfast
One thing I truly appreciate in Pokhara is my super dairy breakfast. Just around the block is a dairy store where I can buy a pint of fresh yogurt (US$0.60), oven-fresh chocolate croissants (US$0.25), yak butter and yak cheese! For something hot, I have Masala tea (US$0.30). This is almost unreal.

Town Indulgence
The rest of the day, I would usually walk around town and if I see an inviting cafe, I stop by for coffee and do my online stuff. At night, I might go to Movie Bella Napoli for dinner that features a full-length movie. Other nights I stop by The Old Blues Bar for some live music. A walk by the lake in the afternoon is picturesque.

Peoplescape
A lot of occasions, I would meet fellow travelers and we'd have a passing conversation. Sometimes, someone joins me at the backpacker hostel and we'd share breakfast together - Melanie and the Turkish guy. The only regret I have is not having a picture of people I've had more than a passing hi-hello talk to.

Manou Chki
I was with Van, a Vietnamese traveler when we shared a table with a soft-spoken, mild-mannered French musician, Manou. Towards the end of my stay, we would hang, have dinner in some cheap but good eats and talk Vipassana. Yes, I meet a good number of Vipassana meditators in my travels - and it's usually an instant connection. With them, there is not much need to explain ourselves - we already get it.

Vipassana Meditation
Just a few kilometers is the Dhamma Pokhara. They have a 10-day course where I wanted to serve, but it ends on my visa expiry date. I would not make it to the India border within the day.

However, I found out that close to the India border is another Vipassana center - in Lumbini, the birth place of the Buddha! The course also ends on my visa expiry day, but I will make it to the border within the day. I applied to serve the full 10 days and I was accepted.

Fitness
For some odd reason, my congestion from Kathmandu wouldn't go away. That meant foregoing fitness or even yoga - I don't workout unless I'm 100%. Too bad, there were many yoga offerings in Pokhara. I would have been a fish thrown into the sea.

Sacred Geometry
I saw a poster for a sacred geometry workshop. I offered a web-deal for a compli-participation. I already have an idea about sacred geometry from videos of Spirit Science I used to subscribe to. Simply put, there is a repeating pattern or repeating ratio that occurs in nature - fractals, Fibonacci sequence, phi ratio, etc. What I hoped to get out of it, which I didn't get from all the videos I've seen, is the pragmatic application of such revelation. I mean, ok...the Fibonacci sequence occurs in flower petals, the Nautilus shell, the spiral galaxies, etc. But so what? By itself, it's not a call to action to something pragmatic we can apply it to in our day-to-day lives. Instead, what I got was more presentation of how it repeats in nature and method on how to create sacred geometric shapes from a dot. I repeatedly asked what we were proving or validating or how this epiphany changes the way we do things. I guess they were not prepared for these questions. The answers I got were fuzzy at best. I left the workshop not having gained any new perspective or insight.

Ending Thoughts
I have to say I love Pokhara..for its stunning beauty and ease (cheap lodging and food). But somehow, I feel like whatever synergy is there never really took off. Whatever potential was there, remained unrealized. It could have been magical instead of "good". But just the same, I am grateful for the privilege of having discovered it and for having met a few travelers who shared insight. Perhaps the next visit unleashes more of its magic.

EC Velayo
(Apr 21, 2018) good to see you in your best shape again Git, indeed we can actually heal ourselves again

Iyengar Yoga Teacher
(Apr 21, 2018) It's my dream to attend a Vipassana course at Pokhara.

Anna Katharina Kramer
(Apr 21, 2018) One of my favourite places on this planet 🙂

Next stop: Trekking to the World Peace Pagoda

»» next Traveling story: Trekking to the World Peace Pagoda
»» back to Traveling
»» back to Homepage