Upper Bhagsu Vibe
After my 2-night stint in lower Upper Bhagsu, I trekked up to a higher elevation to Upper Bhagsu adjacent to Upper Dharamkot (equally as fascinating as Upper Bhagsu). I paid for a week at Rp 200/night - the cheapest I could find. I had a spacious room for myself with shared bathroom. I could climb up my neighbor's roof and enjoy the view as I do my morning yoga. Every passing day in my new neighborhood got better. This elevated location through mountain trails carrying your heavy luggage already filters the community in mindset and density. It's not crowded and you only meet the most wonderful people. Here, nearly everyone is steeped in their spiritual evolution. Talks always default to yoga, meditation, reiki, panchakarma, ayahuasca, etc. Hippies converge here - they look it, talk it and smoke ganga like Cheech and Chong!

Meir and Marco
Just to showcase how committed these people are to their quest for spirituality, I bumped separately into Meir and Marko - cool guys I met on the bus from Rishikesh to Dharamshala. I got into a talk with Meir about meditation. When we hit an impasse, he took out from his pack, a 2-inch book on meditation to prove his point!

While having dinner with Marco, I mentioned my interest in complementing my yoga with ayurveda. Without missing a beat, he pulls out a thick book entitled "Ayurveda and Yoga" from his pack. Whoa! These guys and everyone else I met are dead serious and committed.

Cafe Scene
There are lots of cafes in Upper Bhagsu/Upper Dharamkot. I've gone to nearly all - Salvation Cafe, Heena Cafe, Dream Catcher Cafe, Shiva Cafe, Nirvana Cafe, Birdhouse Cakerie and Backpackers Kafenio. They are all wonderful. But like water finding its own level, I defaulted to Friend's Corner Cafe. I would meet and talk to just everyone there as I became a familiar face. They don't have wifi which is perhaps a good thing. The front side are tables overlooking the valley where people talk to each other. The back side have huge rocks with a comfy space where musicians would often gather and play music - anyone can jam. Prices are reasonable and owners are welcoming. 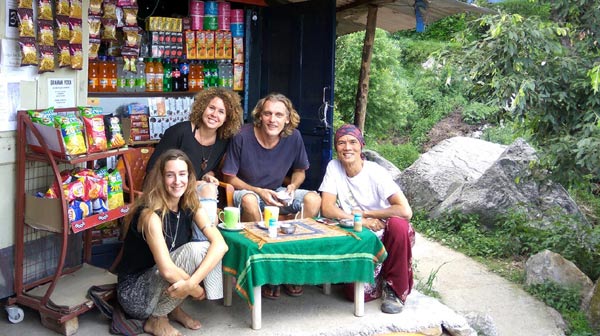 Nico and Rajnika
Almost like a permanent fixture at Friend's Corner was Nico and Rajnika. These are 2 people that impressed me. They usually keep to themselves and are unassuming but everybody knew them and were given a courteous acknowledgement. I would have written a full story on Nico and Rajnika (with full contact info) but they didn't want it. I wanted to help put the word out about them and say 'Thank you for the classes' in my own currency. But they said that the ones who learn about them and seek them out are the right students - no social media or online hype required. In this day of dime-a-dozen self-proclaimed gurus who crave to be the next Youtube sensation but are only a week ahead of their students, I truly respect Nico and Rajnika's balance and restrain.

Chi Gong
It wasn't after a few days until someone told me that Nico teaches chi gong on a donation basis. What really got my attention was Nico taking a flight of steps on a handstand! I didn't see this myself but I trust the one who told me so. I showed up to his 6:30-8:30am daily class. The class was exhilarating as Nico was highly skilled and knowledgeable. He has been learning chi gong from many teachers for the last 15 years. I invited other friends to join - Kylie, Greg, Navraj, Meir, etc. Kylie became a regular.

Throat Vibration
As if chi gong is not enough, at one point, Nico also offered a throat vibration class - for lack of a better name to call it. We produced a sound (not a voice) by vibrating our throat. We would then manipulate this sound but drawing it from various parts of our body in various constrictions - pulling and activating energy from all over. Nico and Rajnika emulated the sound of a didgeridoo. Essentially, we were hyperventilating - inhaling deep to slowly extend our outbreath to produce the sound and to inhale fully again and repeat the cycle. At the end of it, we went into meditation. It was intense!

I heard from another source that Nico gives a special intuitive massage - and can command a hefty price on the market if he wishes to. Wow, this guy is has a lot of dimension to him! I'm sure he has many layered talents/skills hidden still.

Chi Gong with Rajnika
On my last day in Upper Bhagsu, only me and Rajnika showed up for chi gong. Rajnika said perhaps it was meant to be that way so she can teach me one-on-one to make the necessary corrections. All the while, I thought Rajnika was Nico's student, but apparently, Rajnika is a competent chi gong teacher as well. Her verbal articulation in a minimalist way was both poetic and precise - a rare combination. She pointed out the nuances of the pose, breath and visualization. I couldn't hug her enough after the session.

Kali
Another character in Upper Bhagsu was a shamanic lady, Kali. She was a powerful presence with an equally powerful voice that reverberated into the stillness of the night. She dominates any conversation but in a good way - she's a dear. Expectedly, it didn't take long before everybody knew her as she openly offered a potent nirvanic rush more powerful than ayahuasca thru the use of toad toxin, popularly known as 5-MeO-DMT. She aggressively advertised and talked about it. While 5-MeO-DMT remains unregulated, she caught the attention and ire of some of the locals who found her alarming. One morning, 20 police personnel raided her room. I talked to her the day after. She was still shaken but her ordeals are far from over. I just hope all turns up well for her. My thoughts go with you Kali.

Greg and Kylie
It's so cool that 2 friends from Rishikesh are also here - Greg and Kylie. I hung out with Greg at Salvation Cafe and caught up with the latest. I haven't met anyone doing the full spectrum of what's out there - yoga, spiritual pilgrimage, chakra healing, meditation, reiki, craniosacral therapy, ecstatic dance, etc. He's totally into it.

Kylie was a regular at my yoga class in Rishikesh. She did Iyengar yoga in Dharamshala and joined me for chi gong and throat vibration with Nico. We also did the meditation at Tushita Temple. Always a delight to spend quality moment with cool friends who are serious about being on the path.

Ending Thoughts
I would have extended my stay in Upper Bhagsu after my one week, but something pleasantly surprising happened. I had to move to McLeod Ganj to be a yoga teacher at Pema Thang Guest House. I will save up on lodging, make a little money and deepen my yoga. The hustle and bustle of McLeod Ganj is light years away from the tranquility of Upper Bhagsu but I welcome the abundance and challenge that lies ahead. Another mini-life in the making.

My 7 days in Upper Bhagsu was nothing less than magical. The cool mountain climate, the scenic valley view, the eclectic cafe scene, the chill denizens who endured the high climb with their heavy luggage to pursue their spirituality, the affordability of the place, its isolation, the be-in events, etc., all amounted to a sensory bliss that permeates. I would put Dharamshala in my Top 3 destinations together with Penang (Malaysia) and Ubud (Bali, Indonesia).

p.s. I would have taken more pictures, specially the wonderful people I met. But moments were so magical I felt it would disrupt the flow. I simply let go, allowing the moments to take place without immortalizing them into pixels.

Laura Pearce
(June 25, 2018) So looking forward to getting back there in August..hope you stick around!

»» next story: Conducting Yoga Classes at Pema Thang Guest House, Dharamshala, India
»» next Traveling story: Visiting the Tibet Museum
»» back to Traveling
»» back to Homepage