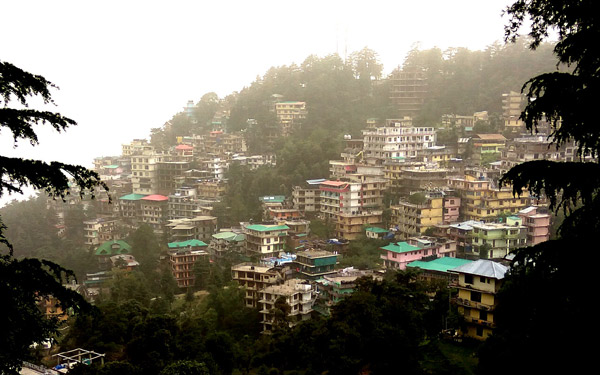 Dharamshala is widely known as the residence of His Holiness, the Dalai Lama and the seat of the Tibetan government-in-exile. Many Tibetans have since settled here, giving the once Buddhist and Hindi place a dominant Tibetan flavour with the development of Tibetan monasteries, temples and schools. With the popularity of the Dalai Lama and Dharamshala's cool Himalayan climate, the place has become an important tourist destination.

When people talk about "Dharamshala", they mean lower-Dharamshala or the Kotwali Bazaar market where most commerce take place. McLeod Ganj, also upper-Dharamshala is further up the mountain. The main tourist hub is McLeod Ganj where the Dalai Lama resides.

Surrounded by a forest of cedar trees, it is already on the foothills of the Himalayas with its highest altitude at 2352 MASL.

(June 23-July 8, 2018) With an offer to teach yoga and a barter-deal for a roof over my head, I left the bliss of Upper Bhagsu to stay 16 days at Pema Thang Guest House in McLeod Ganj. It was a different scene altogether and a different challenge.....more »»

(June 14 - July 8, 2018) Like Rishikesh, most of the people I met in Dharamshala came to pursue their spiritual path. The higher up in elevation they settle at (from McLeod Ganj, going up to Dharamcot/Bhagsu, to Upper Dharamcot/Upper Bhagsu), the more filtered they got towards the path. But every once in a while, I'd meet someone interesting in McLeod Ganj as well.....more »»

(June 30, 2018) Getting a good sense and comfort level with each other, Marleen and I agreed to base our friendship on radical honesty. It's not for everyone as it demands a lot of non-reaction, dissolution of ego and 'rising above'....more »»

(June 26, 2018) Greg has been a reassuring constant since I met him in Rishikesh. A wonderful human being and kindred soul, I am thankful to have met him. I'd like to think we are karmically entangled with paths crossing again in another place and time....more »»

(July 1, 2018) Unlike most of the people in Upper Bhagsu who came for spiritual pursuit, Eva came to heal and finish some academic work as well. Yes, she's involved in the academe - dedicated, smart and comes across as all-business and no-nonsense, bordering on aloof...more »»

(June 27, 2018) China's invasion of Tibet and brutal repression of the Tibetans is a matter of public record - thanks largely to the efforts of His Holiness, the Dalai Lama in bringing worldwide attention to this tragedy. That's the big picture we see. But visiting the Tibet Museum and learning details of what happened and what continues to happen puts you in ringside seat as events unfold.....more »»

In Search of a Tibetan Yantra Yoga Teacher

(June 25, 2018) Ever since I saw the video documentary, The Yogis Of Tibet, I have been intrigued and fascinated. The yoga practice seemed different from the Hatha Yoga I had been practising for years. Now in Dharamshala (India), home of the Tibetans-in-exile, I sought them out....more »»

(June 24 - July 8, 2018) I found it odd and interesting for a Filipino like me to go to India and teach yoga to Indian nationals. It felt like teaching an Italian how to cook pasta. But as yoga teacher at Pema Thang Guest House where guests are mostly Indians, that's how it happened....more »»

(June 16-23, 2018) My 7 days in Upper Bhagsu was nothing less than magical. The cool mountain climate, the scenic valley view, the eclectic cafe scene, the chill denizens who endured the high climb with their heavy luggage to pursue their spirituality, the affordability of the place, its isolation, the be-in events, etc., all amounted to a sensory bliss quite rare given all my travels.....more »»

(June 19, 2018) The 3 good things coming out of this activity is the trek itself, the destination and the company I kept - Navraj and Stanley. From Dharamkot, we started trekking a mountain dirt road that took us along winding trails, scenic views and Tibetan prayer flags until we reached Naddi where we chilled out for tea before going our own ways.....more »»

Matters of the Heart

(Jun 17, 2018) If I have a weak link in my human chain, it might be the heart. I intellectualize nearly everything. Now, my benevolent universe is telling me along clear lines not to use my head to accomplish the tasks that the heart was meant to do.....more »»

A First Timer in Dharamshala

(Jun 14, 2018) Having done my mini-life in Rishikesh, it was time to move on again. Manali? Ladak? Shimla? They were the likely destinations during the monsoon season. However, since I only had 30 days left in my visa for another 30-day mini-life, I had to go to Dharamshala - the residence of his Holiness, the Dalai Lama and seat of the Tibetan government-in-exile.....more »»