The Tibetan Cause
Tibet Museum isn't about Tibetan culture, tradition or religion but about Tibet's crusade against Chinese illegal occupation of Tibet and brutal repression of the Tibetans who struggle for freedom.

Ringside Seat
China's invasion of Tibet and human rights abuses inflicted on the Tibetans is a matter of public record - thanks largely to the efforts of His Holiness, the Dalai Lama in bringing worldwide attention to this tragedy. That's the big picture we see. But visiting the Tibet Museum and learning details of what happened and what continues to happen puts you on ringside seat as events unfold.

History
The museum features in pictures and written narrative the historical accounts that shaped Tibet from the earliest records up to the present day. The focus begins on the 1950s when Chinese aggression began to escalate leading to the Dalai Lama's daring escape through the harsh Himalayan mountains into the safety of India in 1959. What followed was the inhumane brutalization of the Chinese against the peaceful Tibetan monks in occupied-Tibet not unlike ethnic cleansing that has taken place in Rwanda. More than 150 Tibetans have put themselves on fire in protest of the Chinese invasion. The Chinese have destroyed over 6000 monasteries, burned sacred manuscripts and killed, tortured and imprisoned hundreds of thousands of Tibetans in the process. Han and Hue Chinese are resettled in large numbers into Tibet, reducing the Tibetans as minority in their own country. The Chinese have also wreaked havoc into Tibet's ecology through nuclear testing, mining and indiscriminate deforestation. 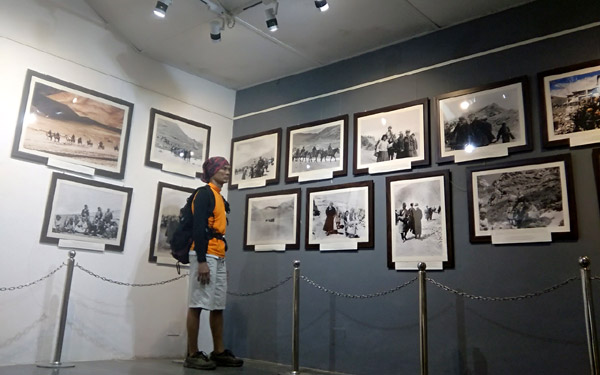 Autonomous Tibet vs. Independent Tibet
In the late 80s, there has been a radical shift in policy which puts the Dalai Lama between a rock and a hard place. In a pragmatic but surprising move, after decades of brutal oppression by the Chinese, the Dalai Lama proposed the Middle Path - that Tibet be autonomous and not independent. Tibetans can regain some control of their lives through a degree of self-governance instead of being crushed. Their religion and culture will be preserved instead of being erased. On the other hand, it also means Tibet will forever be a part of China and permanently lose its sovereignty. But despite the Tibetan back-bending, the Chinese have arrogantly rejected the Middle Path in 2008. The Dalai Lama continues to keep the Middle Path policy.

This creates a sharp division within the Tibetans. The hardliners, after the torture and imprisonment they've endured, would rather die fighting than be marginalized second class Chinese citizens in their own country. Others object but remain drawn to their allegiance to the Dalai Lama. This rift is a great divide to what was once a solid and unified Tibetan resolve.

Ending Thoughts
I speculate that the clever Chinese are just awaiting for the Dalai Lama to pass on - that is why they are not sitting on the negotiating table. His Holiness is now 83 years old and not in the best of health. It won't take long. When he is gone, Tibet loses whatever global attention it still enjoys. This makes it easier for the Chinese to continue its repression without the global attention. It will be easier for them to completely subdue all Tibetans within occupied-Tibet. They can brutally crush a protest, put the Tibetans into indentured slavery, erase Tibetan Buddhism and wipe-out any remnant of Tibetan culture! If the international community has done nothing to free Tibet while the Dalai Lama is alive, how much less will they be doing when he is already gone?

China is now the uncontested Big Bully of Asia. It invades, occupies and brutalizes everything in its way to gain global dominance. Not only has it crushed with impunity the peaceful Tibetans but also illegally claimed, occupied and militarized nearly all the islands in the South China Sea which have originally belonged to these Asean countries. China continues its blatant aggression while the free world at large looks on indifferently - countries in high places might release a protest statement or two but it ends there. No meaningful action has been done by the international community to stem China's unrestrained aggression.

Tibet Museum keeps the struggle alive for Tibet's freedom. Through this institution, visitors in Dharamshala are given a ringside seat to Tibet's plight, giving the struggle flesh and blood to what otherwise might be relegated as staid 2-dimensional news.

(July 2018) Thanks for sharing and enlightening us on this subject. I PRAY this will not happen to our country because, just like Tibet, we are also as helpless and as small when compared to China..... Be careful.

TheLoneRider
(July 1, 2018) True. I would not trust the Chinese. The Philippines is on slippery slope with all of Duterte's sweetheart-deals with them.

(June 14 - July 8, 2018) Like Rishikesh, most of the people I met in Dharamshala came to pursue their spiritual path. The higher up in elevation they settle at (from McLeod Ganj, going up to Dharamcot/Bhagsu, to Upper Dharamcot/Upper Bhagsu), the more filtered they got towards the path. But every once in a while, I'd meet someone interesting in McLeod Ganj as well.....more »»

(June 23-July 8, 2018) With an offer to teach yoga and a barter-deal for a roof over my head, I left the bliss of Upper Bhagsu to stay 16 days at Pema Thang Guest House in McLeod Ganj. It was a different scene altogether and a different challenge.....more »»