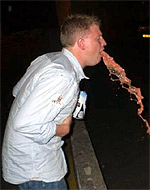 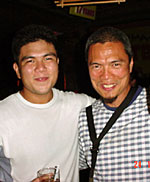 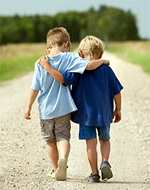 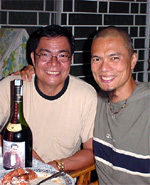 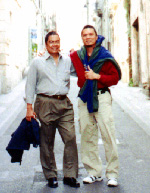 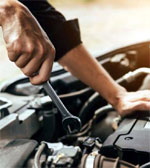 True Friendship
How many friends do we have? From all of them, who are our true friends. How would we know? What makes a true friend? How easy or how hard is it to find one? How do you begin to be a true friend?

My father, who epitomizes what a people-person is all about, told me at one point that if you go through life and come out with 1 true friend, then you're one lucky guy. I didn't expect that. Coming from a guy who developed friends and might I say, a following, in any part of the country he was thrown at, I found it rather surprising. He was a tough guy who knuckled his way through hard knocks, winning the hearts and minds of guys down the trenches with him - and now he's telling me one in a lifetime is plenty.

A relatively newfound friend, a lurking lonerider who, after a few rounds of Keith's India Pale Ale, finally revealed her true color this evening, remarked having many epidermal acquaintances but having 8 true friends who'll go the distance with her - this including a 'best friend' who even stands above them all. 8 true friends? Am I in the presence of greatness? It wasn't BS. I've spent enough moments (fleeting and the not-so-fleeting) with her to find that comprehensible. Her vulnerable but reassuring demeanor said it all. No wonder she found it surprising that I find acts of kindness a few and far-in-between occurrence. She probably gets acts of kindness for breakfast...and it's not a come-on.

This brings me back to my early days in New York as a struggling and overstaying tourist out to have some adventure. I was a stranger in a strange land...an outsider looking in. And there's this dude, a brother of a fellow alumnus from the university, who offered to fix my car for nothing. I was too flat-busted-broke to afford a half-decent mechanic for my beat-up $750 Honda Civic. He spent the whole day doing what he can...he wasn't a mechanic - just a guy trying to help. It didn't matter the car didn't work. What got me was his unsolicited kindness. In the words of the Chief-of-Police in the movie Casablanca, I knew it was the start of a "beautiful friendship". After that, we'd chill and talk about the earlier days when we were alone, broke, cold, hungry and wet. Like myself, he was alone in a big city and didn't know a soul. We'd bike, go to free concerts, drink cheap beer in some dive blues bar and talk about wine, women and music. This was all before kids and family....when there was nothing left to lose. Things couldn't be any better.

Ending Thoughts
I don't have 8, but hey, I have Mario. That makes me one lucky guy.