Restless in Manila
After the holidays in Manila, it was time to hit the beaches of Coron (Busuanga) again for that laid-back lifestyle of sun and sand. With no cheap air fare available given the short time frame, my only recourse was to take the 2GO ferry plying the Manila-Coron route. This would be my first time to do that.

2GO Ferry: Manila to Coron and Back
Taking the overnight boat ride makes economic sense - it's cheaper than regular air fare and you save one night's lodging. 2GO's facilities were better than I expected - it resembled more an airport than a bus station (at least the Manila port). The ship is clean and staff are attentive. However, and I use the word 'habitually' as confirmed by Coron locals, the ferry often departs late...very late from schedule. To Coron, it was 7 hours late, and back to Manila, it was 5 hours late! It's bad enough the ferry ride takes 14 hours, but add the late departure and we're talking around 20 hours on the boat. There is no wifi onboard and online booking for two people results in beds far apart instead of side-by-side. Additionally, when I asked the Coron office to print my online ticket, they charged me P100 for the 2 sheets - Ink Man charges P1/sheet. I harshly criticized the Coron office for their eye-gouging consumer ambush. At best, the printing should have been a complimentary customer service. 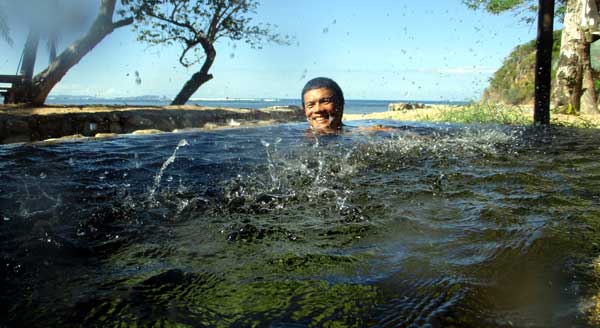 Outback Greg
In Coron, I hooked-up with my adventure buddy, Outback Greg who is ever ready to spice things up with all his adrenalin toys at Tribal Adventures Tours - kayaks, mountain bikes, jet ski, snorkeling equipment, etc. I could have joined his 4-day Coron-to-El Nido expedition, but the timing didn't work out for me. Greg and I go back to my early Sagada days where we met. We rode the single tracks together and hung our hammocks on some mountain slope to chill, picnic and chat. We even rode into a remote mountain village in the Cordillera where the entire village folks were starring at us. It was discomforting to say the least. We later realized they haven't seen two guys on Spandex before! Greg also faced challenging times in Boracay where I got to use my web machinery to even-up the playing field against the bad guys. Yeah, we go back and it was a pleasure to spend time with him again.

SandCastles Palawan
We headed northeast of Busuanga to his isolated resort in Cheey, SandCastles Palawan where I stayed for the most part of my Coron stay. SandCastles is a little slice of paradise tucked neatly on a cove where dugong sightings are still reported. It has air-conditioned bungalows designed to weather a typhoon and it also has rustic cottages built on a hill slope overlooking the sea. I chilled out and talked to the guests who also had fascinating stories to tell. With all the Tribal Adventure toys stocked at SandCastles, it was a grown-up playground that put a surgical smile on my face.

Coron Town
It has been 2 years since my last visit and I saw how the place has changed. Most conspicuous are the new and trendy restaurants that now serve delectable food. A modest Thai restaurant, Winnie's, serves good Southeast Asian meals. Trattoria Altrove, is an Italian hipster resto serving good pizza, pasta and seafood. Other hotels also sprung up. Price-wise, you spend more here than other Philippine destinations, except Boracay perhaps. Island hopping tours are everywhere, but Al Linsangan's Calamianes Expeditions remain one that offers value and support to the indigenous people of Coron. Despite the progress, internet remains sluggish and unreliable. This is odd. I wonder why the local government hasn't done anything about this bottle-neck. Coron needs people who are dynamic and forward-thinking. Cpron is on a shifting mandate to level-up its benchmark.

Boat Ride from Coron to Cheey
I have always taken the land route on Greg's Land Rover or the Hilux pick-up from Coron to Cheey. But this time, a boat was making the trip to deliver some kayaks to SandCastles in Cheey. I opted to join-in, sleep over at SandCastles and hitch a ride back to Coron the following day on the Hilux. The boat ride departed too late in the day - around 10:30am. The boat ride non-stop would already take the whole day, so that already put pressure on our time frame. Plus, there were scheduled snorkeling stops en route - Calumbuyan Island, North Kay and Black Island. I was told that these are perhaps the 3 best snorkeling places in all of Coron. But due to time constraints and the boat's hard-starting, only Calumbuyan was visited. It became a harrowing ride when it got dark. The waters got choppy and the boatman gunned the engine to make up for lost time. We arrived night time with the tide not high enough for a shore docking. We had to walk the knee-deep water to make it to shore. Unlike the boatman, we were lucky not to have stepped on the sea urchins. That boat ride is perhaps the memorable high light of Coron.

Snorkeling at Calumbuyan Island
In my snorkeling experience, Calumbuyan is one of the best. During my last visit, I almost got lost in the thick coral forest surrounding the island. It has its own relief system with gullies and shallow ridges. This time however, I saw the damage the recent typhoon had on the reef system. Some sections are now in rubble and recovering. Altogether, Calumbuyan remains a very good snorkeling destination.

1-kilo Giant Shrimps
Al Linsangan, who has become a friend in the ensuing years, invited me to join his family for a sumptuous lunch at his private property in Maricaban. He talked about 1-kilo giant shrimps on the menu! I haven't seen such a thing and I would have loved to be there and explore his private playground as well. But time constraints didn't allow me that. Sigh! Thank you Al - you've always meant well.

Ending Thoughts
This visit is unusual because it was short. Normally, I stay in Coron for weeks before another destination presents itself. I headed back to Manila, but more refreshed and invigorated. Outback Greg was already on his way to El Nido by the time I left. Coron is always special. The continued growth is promising but I hope the infrastructure catches up.

Thank you Greg for your kindness. I'm sure to see you again at some fork on the open road. Big "thank you" too to Lerma, Derek and the attentive staff of SandCastles Palawan for making my stay a comfortable and memorable one.

Doris Rodriguez
(Jan 21, 2016) Wow! So, it was just last Tuesday with Dong Abay and Elwyn Zalamea and now in Coron

»» next story: Dong Abay Rocks 70s Bistro
»» next Traveling story: aaaa
»» back to Traveling
»» back to Homepage