Heard it through the Grapevine
I first heard of Bitaugan Whirlpool at Cody's Bar from a runner/doctor. He described it as a thundering roar of swirling water that was both powerful and spellbinding! He got my attention. Then I heard of the whirlpool again about a man who was swallowed together with his boat...and regurgitated back, only to be swallowed again. This happened 4 times before he was rescued. The tale was so over-the-top I thought it was urban legend. When the Surigao tourism office asked me to tag along a group of guys from Data-Byte, who was contracted by GMA to take aerial shots of Bitaugan Whirlpool, it was an offer I dropped everything for. I even brought my snorkeling gear with me, thinking I can hang-on to the outrigger while I watch the whirlpool from below the water surface.

High-Tech Gizmo
Upon boarding the van, I noticed some high-tech gadgetry these guys brought with them. I saw this strange disc-like contraption about a meter in diameter with propellers. Initially, I thought it was a submersible, but with all the wires sticking out, I figured it must be an aerial drone with 8 independent propellers. Whoa! I've never seen anything like that before. It got exciting.

Now You See it, Now You Don't
After a little over an hour on a double-engine pumpboat, we arrived at Brgy. Bitaugan at the Island of Bayagnan I thought I would see the whirlpool there but I was told it wasn't a 24/7 spectacle. There is precise timing to actually see it. First, it only shows up either on a full moon or a new moon...hmmm, that narrows it down to twice a month. Then, it only shows up during the low tide...hmmm, that narrows it down again to just an hour or two. If that wasn't restrictive enough, you have to show up only in the months of April to August since the low tide happens in the daytime - other months, low tide happens at night. Whoa! Coming here requires careful planning! 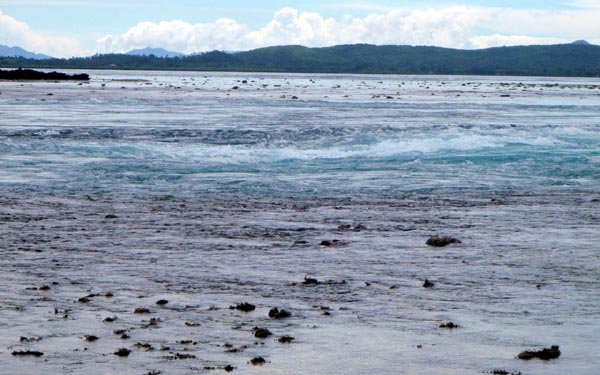 From Dr. Jeckyll to Mr. Hyde
Looking at the calm placid water in front of the village, it was hard to imagine that in a few hours, it would be the scene of a ferocious vortex - a black hole in the water sucking everything within its orbit! True enough, when low tide began, I could see the current getting stronger, seeming to drain all the water out of the bay and funneled out into the open sea. The entire seascape in front of me was morphing. It came to a point the water level was low enough to expose the shallow coral rocks leaving only the deep trench where water was rushing out. With the coral rocks exposed, the trench looked like a deep river with a very powerful current. You could actually walk on the rocks until you're right up the edge where a massive amount of water is rushing out. On its edge are the menacing whirlpools - not just one but a few. About 20 feet away from it, huge volumes of water are violently pushed up intermittently creating a swell. I was told that the man who was swallowed by the whirlpool came out of that swell. It was a powerful sight.

The 1978 Tragedy
In 1978, tragedy struck when a pumpboat was swallowed up including its 9 passengers. 6 survived, 3 died but only one body was recovered. When this happened, Mr. Eleno Denzo was only 15. Now in his 50s, I got the rare opportunity to listen to him first hand about what really took place. In May 1978 at 3pm, coming from Surigao to engage in a copra transaction, the pumpboat made an erroneous swerve and capsized on the whirlpool. All 9 passengers were sucked-in together with the boat. They were all thrown around and got separated. The current was so strong as they were pulled down. He saw some of the passengers banged up against the rocky edge of the coral wall. Some were already stripped of their clothing. Mr. Denzo hung tight on the boat as they were violently pulled down. He saw sand and a lot of bubbles as he was tossed like a rag doll. He thought he was going to die until he was suddenly thrown back up. He thought he was saved. But the vortex caught him and his boat again, and pulled them down again, got chewed up, and spewed out again. This happened 4x times until he was rescued. 5 others were rescued. 3 died, but the first body was recovered a week after - it was the wife of the barangay captain at that time. The other bodies were never found For 5 months, Mr. Denzo was afraid of the water. It was not until 2 years later when he felt safe to go on the water again

Ending Thoughts
With Mr. Denzo's story, Bitaugan Whirlpool suddenly had more dimension to it. As magnificent as it was on this visit, we were actually 2 days late. During the Supermoon, 2 days back, the tides were amplified. The frightening roar of the whirlpool was bone-chilling. The spiraling vortex was wider and stronger. I now begin to wonder what it could possibly be like. Moreover, the deep undersea ravine where strong tidal waters rush out must be full of marine life. The coral walls must be teeming with bio-diversity. What if I go to Bitaugan between the new moon and the full moon when the whirlpool is in hibernation? I would like to free-dive that abyss and see for myself what secrets this enchanting river-trench keeps.

(May 27, 2021) Interestingly, GMA (a popular television network) called me up for an interview about my experience in line with their feature presentation on the whirlpool. After an exhaustive logistical preparation on my part, they said, "Sorry, changed plans." Oh well, that's life. But next time they request for an interview, it won't be free.

ps - If you want me to objectively cover the features of your city or municipality or barangay for this website (fiesta, waterfall, mountain trail, lake, river, cave, food, islands, beach, etc.), email me.

Christeen Cereno
(Sep 19, 2013) Wow! That was amazing and scary - even by the photo alone. And the helipad thing - it is very much alike to a featured invention in Three Idiots movie, possibly the perfected version of it. Love reading your blog sir.

How to Get to Bitaugan Whirlpool from Surigao City


»» next Traveling story: Outdoor Adventure Tour in Nonoc Island, Surigao City
»» back to Traveling
»» back to Homepage