A Besao Introduction
After my Besao Loop hike with Paul, Gawani and Adamey - UPM Sagada (I just coined that for UP Mountaineers who reside in this section of the Cordillera), I've been smitten by Besao. What used to be places that meant nothing to me (merely pronounced words - Banguitan, Laylaya, Panabungan, etc), now hold an endearing charm. That hike was a glimpse and I knew I'd be exploring more of it in the near future. 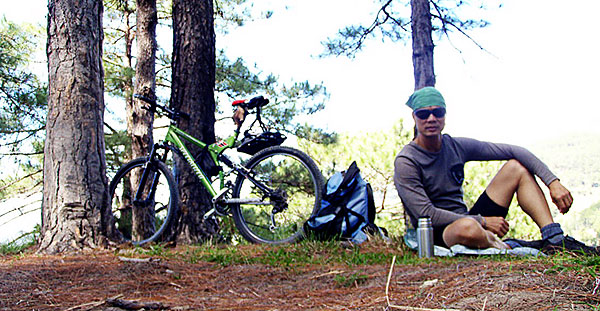 Ride to Panabungan
In preparation for my bike-support of the Ultra-Marathon runners (mostly UP Mountaineers), I decided to do an epic day-ride - actually, my first one. I'm more of a technical single-track rider...not a multi-day endurance rider. It was also an opportunity for me to once again visit Besao - this time, the goal was to bike to the farthest reaches of Besao where the road ends - Panabungan.

Learning from my 2 consecutive crashes, I took it easy on the first 45 minutes, allowing my body to fully acclimatize to the bike and the trails...then hammer.

Besao Valley View
I was just approaching the village of Banguitan when I became distracted by the view to my right - the Besao valley with rice terraces, ravines, rock faces, waterfall and the mountain range backdrop with scattered villages. I've seen it twice before, but not like this. The first time, I was riding with a group and sight seeing wasn't exactly the priority. The second time, I was inside a jeep. Now, I had all the time to savour the scene...no pressure, no deadline to meet and no 'others' to worry about. I found myself dismounting a few times to take pictures (forget about hammering hard to Panabungan!). At one point, I found a shaded flat area overlooking the same valley. That was it. I couldn't ignore the call anymore. I abandoned my Panabungan plan and laid out my ground cloth for an impromptu picnic. When calling like that happens, I don't ignore it. It's usually for a good reason.

Soaking It In
So there I was, chilling out, mesmerized by what's in front of me, having hot coffee from my thermal mug (thanks Redj!), munching on my trail mix and loading up with market suman (rice cake....what I fondly call "poor man's Power Bar"). Darn...where's my hammmock when I need it! It felt selfish to keep it all to myself, so I texted a few friends describing to them what I was looking at. After ingesting all that visual (and yes, spiritual) bounty, it was time to head out.

Banguitan Village
As coincidence would have it, my picnic ground was smack where the Baguitan junction is. Banguitan is unusual in a sense that unlike most villages, it's not off the road. You make a switchback off the junction and follow a brutal climb up the mountain. Where the road ends, that's where Banguitan is. Given the region's history, that is not surprising. During the headhunting days, the Igorots (native people of the Cordillera) would make a settlement where it's inaccessible to outsiders, where approaching enemies can be seen from the top (something similar to the perched castles of Europe).

Anyway, that junction called out...time to head for Banguitan. Panabungan will have to be for another time. The climb to Banguitan was unrelentingly steep. Normally, it was enough to wipe me out. I don't know where my energy reserve was coming from but I reached the top without stopping, without even getting tired. Hmmmm....that is strange.

First Fork
The road on top forked. I took both. The first one ended shortly after but a single-track began. Did anyone say 'single-track'? It was an impeccably groomed trail - wide and packed with the ravine a comfortable meter away. It was graded down so I was coasting by a mountain slope providing me a higher vantage point of the view...whoa! The trail was perfect until it got narrower, rockier and the ravine-side getting closer. At some point, I felt I had to go back - I'm no kamikaze rider.

Second Fork
I went to explore the other fork. It took me even higher to the village watertank where I rested beneath the lone twin pine trees. I could see the Kin-iway peak and Mt. Tinandanan. With compass and topo map, I triangulated my bearings. I wish Paul was there. The last time I tried it on the Besao Loop, I realized I already forgot how to plot my bearing on the map...embarrassing to say the least. I had so much fun playing with my map and compass...feeling 'mountaineer'!

Riding Back to Sagada: The Superman-Effect
On the way back to Sagada, I thought I would push the bike and myself to find out if this lingering surge of energy was for real or just a feeling. What happened next was truly amazing and frightening. I devoted a entire blog about this experience: the Superman-Effect.

Ending Thoughts
This is one of those remarkably special days. Looking back, a few things happened here...abandoning a set course to follow a calling...which inevitably came down to The Flow, allowing me to explore new areas at a heightened level. Taking a ringside seat as I was dwarfed by the magnificent view of Besao valley...and soaking it all in. Again I was a privileged audience to this natural masterpiece. But for now, this has been a truly special day...another treat when life throws in a morsel of its magic...as it has been increasingly doing lately.

(Feb 7, 2008) Ganda! Privileged ka naman talaga, waking up each day to the beauty that is Sagada, living in communion with nature, taking off to wherever, whenever you wanted...saya!

Anne
(Feb 7, 2008) Wait 'til I graduate! I can do the same thing...ha-ha. You know what, when someone asks what my goal is, specially that I'm graduating...I say nothing really...then I tell them about you...naks! Honestly!

»» next story: Riding Sagada-Banaue-Sagada for the Pinoy Ultra Runners
»» next Mountain Biking story: 10th Tour of the Fireflies