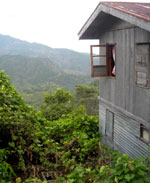 Lester's La Treo Connection
While mountain biking with the La Trinidad Riders to the Asin hot spring in Tuel, Tublay, I broached that I was moving to Sagada and still in search of a place. Lester, my riding buddy who took me along for the ride, networked within his group, La Treo, and connected me to Colas, another rider whose family owns a vacant house in Antadao, Sagada. 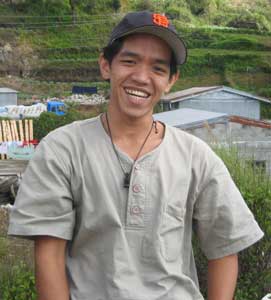 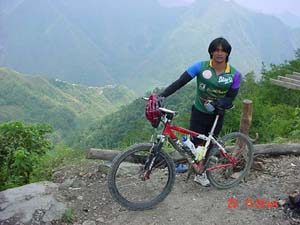 Getting Your Bearings
Sagada is a municipality nestled high up on the Cordillera mountain range, 6 hours north of Baguio via the treacherous Halsema Highway. 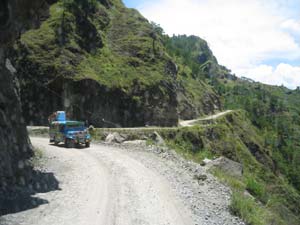 If you're coming from Bontoc, Antadao is the first barangay in Sagada. It's not conspicuous from the main road, but from a different view, it's a cluster of houses that goes down into the valley. 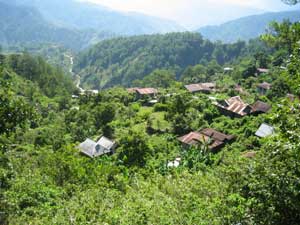 While Antadao is already in Sagada, it still is a good 1 hour, going uphill, by foot to the main Sagada town, the Poblacion. Antadao seems to be it's own thing, functioning independently from the surrounding barangays and somewhat removed from the local on-goings of the Poblacion.

Hospitality - Antadao Style
Colas offered the house for free. Not wanting to overextend my welcome, I was grateful and assured him I will only use it temporarily until I find a more permanent place within the Poblacion. His generosity didn't stop there. He brought another friend, Erikson, to come and help me fix up the place. 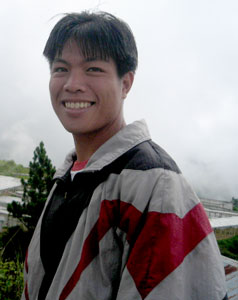 Ensuring that I blend well with the community, he introduced me to the neighbors, his relatives and the barangay elders. The neighbor acquiesced to tapping into their electricity line as well.

The House
From the main road, you take the steep steps down to where the house is located (going back up is already a workout in itself!). 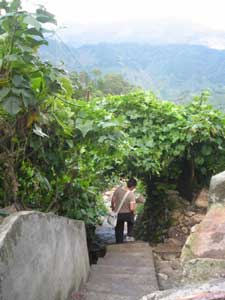 The window provides a breathtaking view of the panoramic valley that includes Bontoc, the barangays of Kilong and Tetep-An. 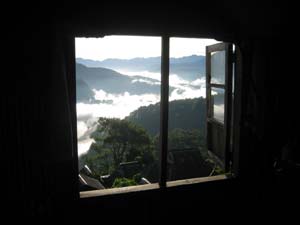 Early mornings during this month, fog from the mountain creeps down into the valley as if to engulf the entire village, revealing only the rooftops. It's a surreal spectacle. 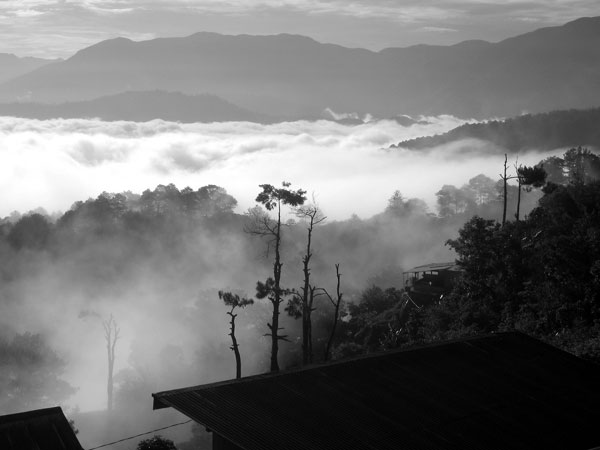 The house has two levels, the ground floor houses the kitchen and dining. The cooking area is traditionally Igorot. 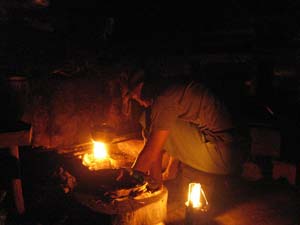 Food is cooked using firewood within an open space inside the house. Etag, Sagada's answer to Parma Ham, is also hung above the fire to soak in all that smoke.

This sounds romantic, but gathering and carrying wood down the mountains, chopping them and then storing them to dry up before use is hard work. Petroleum fuel is available as well, but only for emergencies. 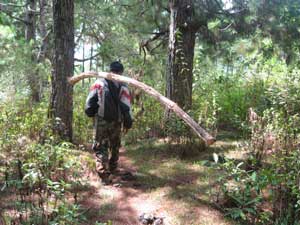 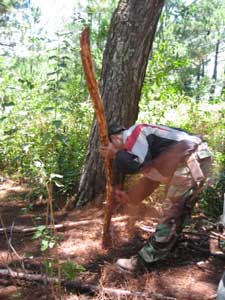 The upper level is a spacious open area for a bedroom. The size of the house is typical for a family of 5. Having it for myself is pure luxury. 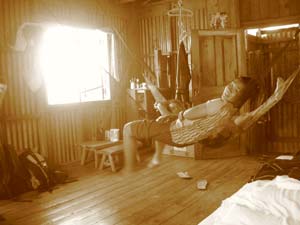 Water Source
Colas showed me the spring source where they get drinking water, careful to point out that the villagers are very respectful of the place. The water is to be scooped out to be brought to the individual home - no bathing, no clothes washing, no dish washing on the premises. I was also told there is an eel whom the villagers regard as guardian of the spring. I didn't see the eel but I saw a small crab. If you think about it, this water holds the viability of the village. I accorded the spring the near-reverence it deserves. 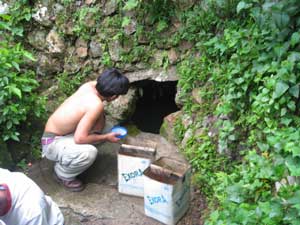 Town Elders
Paving the way for a smoother assimilation, Colas introduced me to a few influential elders of the Antadao community. One such was Tanasio Domling, the barangay captain. Wary that I was there to do a research on their way of life, I assured him I had no such intention. By the time we left his house, he gave me his implied blessing.

We also visited his uncle, Tomas Galbin, who served councillor for a good number of years. He is a soft-spoken man whose contemplative gaze gives away the hard life he's led - he tends to his crops most of the time, makes his own wine, makes his own etag (Sagada ham) and attends to village concerns. Colas also remarked that his uncle is also a village shaman. 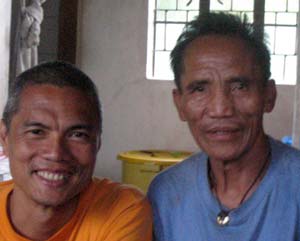 We hardly talked but I was just there, in front of him as silence between us did most of the communication. There's much we could have talked about, but language was a formidable barrier. With grandfatherly demeanor, he said he'll treat me like a son during my stay. I didn't see that coming. I don't think he hands that kind of offer on a whim. We left his home with some etag and fresh harvest.

Indefatigable
There's something that struck me about Colas and Erickson. These guys can't seem to keep still. They had to be consistently doing things - chopping wood, gardening, cleaning up, fetching water from the well, cooking, etc. Just watching them do all these things exhaust me. They are simply indefatigable. It's no wonder that after I served us pandesal, peanut butter and coffee for breakfast, they cooked rice and had a whopping serving immediately. They said, that if pandesal is all they'll have, they'll be hungry again soon enough. On top of all that, when it was time for them to leave me and go home to Baguio, they said they were glad to have some relaxing vacation time while helping me out. Hmmm...go figure. 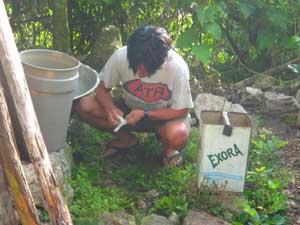 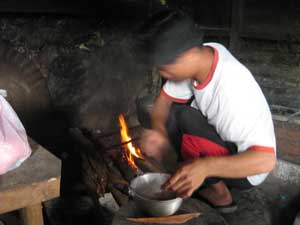 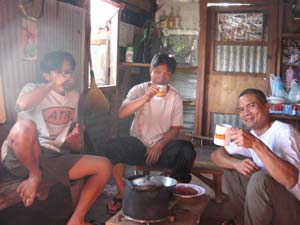 Pruning
An obedient grandson who adheres to tradition and custom, Colas dutifully labored in pruning his grandfather's citrus orchard notwithstanding the grandfather wasn't in the house. Colas wanted me to meet him as well...too bad. We spent a good time pruning. From both of them, being agricultural majors, I learned quite a bit about citrus plants in general. 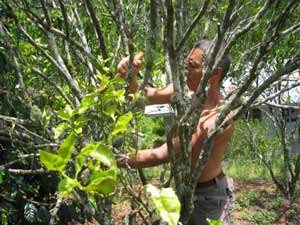 Wedding
Weddings are lavish and enduring. Pigs, chickens and carabaos are slaughtered to feed the entire village for 3 days. Everybody is welcome, tourists included. I was invited to attend such a wedding. None of the people I was previously introduced to was there, but it didn't stop me from meeting more of the locals. The elders performed a prayer ritual (this is solemn and picture taking is looked down upon) followed by the cañao as the well wishers danced around with the rhythmic drumming of the gongs. I introduced myself to the bride and groom and wished them lots of healthy kids. 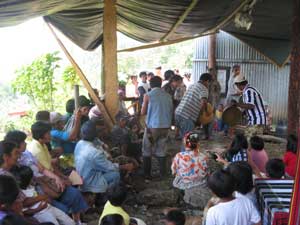 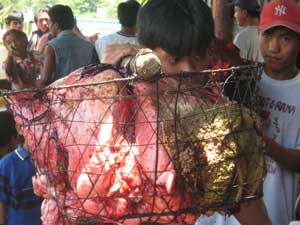 Ending Thoughts
Things have been coming my way, for reasons I still don't know. I'm not even sure if I deserve the good blessings I've been having. I wonder how different things might have been if I didn't introduce myself to this mountain biker I saw in Banaue a year ago - Lester. Through him, I got to ride the trails of La Trinidad and now, meeting Colas. Through Colas, a whole new world opened up to me.

I don't really know much about the Igorots (the indigenous people of the Cordillera) but if the ones I've met so far are a good representation, I can only have the highest regard for the value they put on a decent day's work and their hospitality. They are an industrious people who are not afraid of hard work and share their bounty - in fact, they seem to thrive in it. I even heard from a long time foreign resident that the highest compliment you can extend to an Igorot is to validate his/her productivity. There's much to learn from them.

Colas and Erikson, my profound gratitude.

(May 27, 2006) Saw this narrative and so proud to say I've once met this friendly writer with their photos with dad and my daughters.

Next Traveling:
Hike from Aguid