A Different Animal
Abs are probably the most difficult muscle group to develop. Unlike pecs for instance, just pump it up and voila!, you got pecs. Abs is a different animal all its own. Just pumping it would not necessarily give you the ripped, defined, deeply-cut 6-pack. If you have excess fat, I don't care how developed your abs are, it won't show through that thick layer of blubber. How to shed the fat? 2 words: diet and cardio. On top of that, if you want symmetry, you can't use too much weights on abs. Ideally, you only use body weight. So it takes high reps and a relatively longer time to develop the muscles. Altogether, it's a tall order to have that well developed washboard abs.

Bragging Rights
With my regular fitness program, I've always had a flat stomach. But no definition and no cuts. Abs have long fascinated and eluded me. But this time, I took resolve in developing it no matter what it takes. What to do for motivation? There's nothing like a friendly competition between fitness junkies to bring out the best in you. The prize? Bragging Rights! Yeah Baby, that should do it.

Cos, the Sunshine Boy
The next question now is, against whom? The choice was obvious. Cos, the guy who works a few tables across also happens to be the alpha fitness junkie in the company. Towering at 6' 4" and built like a tank, he also has the right looks to be poster boy for the Toronto Sun's "Sunshine Boy". In our in-house gym, he's also the strength trainer, and if he's not on his desk, he's in the gym - Mr. High Protein-Low Carb. Not one to say no to an abs challenge, it wasn't difficult to engage him to the abs competition. We agreed on this around early February with the showdown taking place - today! That gave us roughly 2 1/2 months to prepare for it.

Going the Whole 9 Yards
With single-minded focus, I started my program by buying The Complete Book of Abs - all 256 pages just on abs. My diet? Oatmeal/wheat germ/dried fruits and honey for breakfast, vegetables simmered in vegetable juice (not water) for lunch, and a can of tuna (30g. protein) for dinner (to the chagrin of Andrew "That thing you're eating smells like fish" Mitchell who sits in front of me)...oh, and lots of BLAST energy bars for my pre, during and post workout supplement. My workout routine? Lots of cardio (stairclimber & rope skipping), lots more of abs (through the fitness classes of bona fide abs aficionados themselves - Angie, Mirella and Assata), commute by bike and yoga. I was shedding fat like crazy. As skinny as I was at 155 lbs. when we started, I am now at 140 lbs. For the last 2 months, I was living, breathing and dreaming abs. 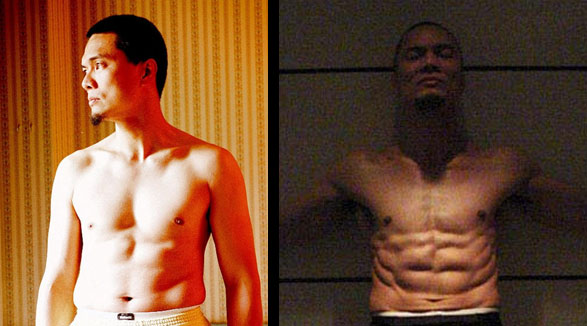 The Showdown
Today, the time has come to separate the men from the boys. With an SLR and digital cameras and Karen, my boss, to take the pictures, the photo shoot was a party altogether (even though it was just the 3 of us -- no audience!). I have to admit though that taking your top off and start posing to the same person who'll eventually do your employee-evaluation was initially awkward. But she was a great trooper. Narcissistic and vain as it was, I got a kick out of it. I guess we're all hams to a certain degree. 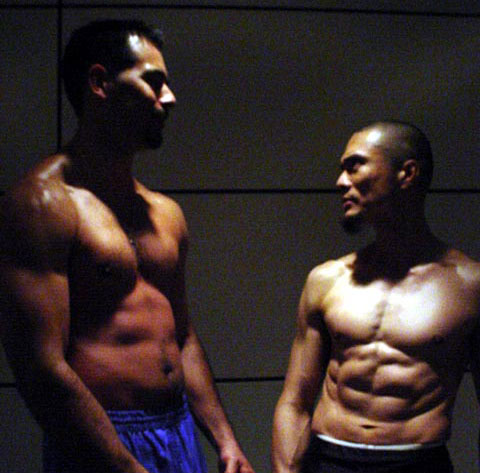 Ending Thoughts
With all the hard work and long hours we both undertook to develop our abs, and seeing that my efforts paid off (to the extent they did), the clear winner of the competition became obvious - both of us. This is one competition where no matter who won, nobody loses.

Winston S. Chua
(3 Jan 2007) I read the "the abs showdown" last night and was really envious. Can you give me more details of how you acheived it? It's my dream to have a six pack and I was close to having it last year. I got into MTB and road biking which inspired me to lead a healthy lifestyle. In 5 month, I lost 65lbs and for the first time in my life I can see slightly the vertical centerline of my abs. That was until I went abroad for a long vacation and started to backslide. Now I'm 195 lbs and just started a training / diet program again to get ready for Sagada.

Assata, Fitness & Wellness Coordinator
(May 2002) Congrats on the abs showdown...you look "abs"-solutely awesome. My concern however, is your diet. It seems to me that you were burning more calories than you were consuming. Now that the contest is over will you start eating more food? And if you do will you let your readers know that your "diet" was for the contest only?

That's a very good point. I planned the whole program so that I can peak around that time. I don't think I could have sustained that program any longer than I did. My life is back to normal...eating just as healthy but with a little more food. I still workout regularly but not as intense (no more doing obliques for an entire hour). Thanks for raising the issue...and for the kind words. -- TheLoneRider

Next story:
Gnarly Charly MTB Race
Next Fitness:
Junkie in Search of a Fix