The Burden of Gift Giving

Yuletide Season
As the yuletide season swings into full gear, it's time to buy gifts again for those we hold dear, for those who expect it, for those we owe or for those gatherings where it's expected of us. It is seen by some as an opportunity to express thanks, love and friendship. To some, it's an obligatory burden. Gift-giving has morphed into its own industry with its own culture. It conjures many memories from days past.

The Kid Who Was Left Out
In Philippine culture (at least when I was a kid), it's expected of you to bring a gift to a birthday party. The celebrant also expects it. I was a toddler then and our next door neighbor was having a children's party where I was invited. My mom made it clear to me to wait for her before coming over to the party, because she would have the gift with her. The party was already underway and I was all dressed up for it, looking at the celebrants from the adjoining fence, waiting for my mom. The kids were all playing and were telling me to come and join them. I wanted to but I had no gift. The parents noticed me and again asked me to come over and join the other kids. I really wanted to, but I had to tell them I can't because I still had no gift. They could not convince me otherwise. For me, it wasn't an option. My mom had clear instructions not to go to the party until I had the gift with me. It was almost dark when my mom arrived. I was already crying because I could see the other kids playing and I couldn't join them. But finally, with my gift, I crossed to the other side of the fence and got to play with them.

Thought Bubble
I'm not vilifying my mom. She only did what most mothers would do then and she didn't expect to be late. But I could not forget that incident. Gift-giving became a horrific price of admission. I vowed that if I ever host a birthday party, I will only require the presence of the invitees - absolutely no gift giving! I would not want them to be absent simply because they have no gift. 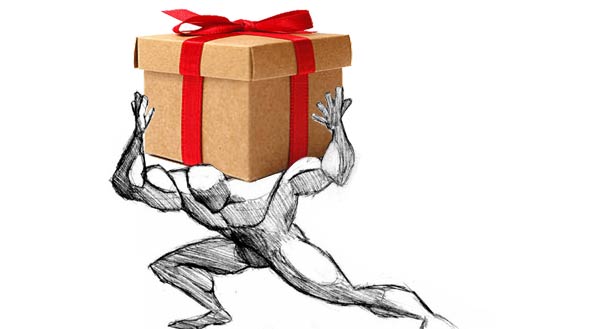 50-Pax Christmas List
Back when I was still living in Canada with my family, our social circle grew to the tune of 50 people in our Christmas list. Don't get me wrong - I love these guys, that's why they are on that list. I remember braving the crowded malls in search of a suitable gift for each and everyone of them - hopefully, on sale! It wasn't as simple as that. I had to bundle up because it's freezing outside, shovel the sidewalk to get my car out, drive through traffic in snow, find a vacant parking spot in a crowded mall, elbow my way through the department stores in search of that gift, coming back home and wrapping up all of them. And just when I thought I had everything covered, a forgotten name pops up in the list. And I have to repeat that whole process again! I dreaded Christmas as I anticipate that nightmare.

Thought Bubble
With my life now as a nomad, where all my friends are out of my radius, I am greatly relieved I no longer have to bother with that list. If I see something a friend would love (and logistically, it's viable), then I would get it no matter what date on the calendar.

Declining Invites
Again, back in Canada after my divorce when I was living alone, once-in-a-while, I would receive invites for weddings or special occasions from friends. That excites me - it's a time I can be with friends again and be merry (in North America, social gatherings are not as frequent as it is in the Philippines)! But often, my funds would be low. It would be losing face (and perhaps insulting) to give a cheap gift. Neither was it appealing to show up with no gift while everyone has. More often, I would end up declining the invite with a made-up excuse.

Thought Bubble
I know my friends genuinely like me to be there - and it's not about the gift. But culturally speaking, you just don't show up without a gift or bring a cheap gift. To say the least, it's uncomfortable. Now I know how my mother felt when she told me not to go to the party without a gift. Increasingly, I viewed gift-giving as a liability...a burden.

The Gold Necklace
I was traveling with my dad and at the airport saying goodbye to his friends in Toronto, all of them, one by one, took turns to give my dad and me a parting present. It was not expected and I was surprised. Apparently, one of the guys in the send-off party, Buddy (I don't think he'll ever read this anyway - wonderful guy though!), also did not expect that there would be gift-giving. I could see the panicked look in his eyes. Everybody had a going-away present for us except him! When everyone gave their presents already and he knew it was his turn, and there was no turning back, he slowly approached me, removed the gold necklace hanging off his neck, and told me that he has always wanted me to have it. I could feel my heart imploding at that point. I had to pretend I was touched, but I really felt sorry for him. It must have cost him a fortune to buy that gold necklace and I'm sure he never had the intention to part with it. I really wanted to refuse it, but it was too awkward to do so. It would only underscore the obvious, that we all knew his predicament, although everybody pretended not to notice it.

Thought Bubble
I don't know where that gold chain is now, but I remember distinctly that I could not look at it without feeling a heaviness in me. Again, cultural dictates constrained him to part with the necklace as I was constrained to accept it. I was increasingly seeing the unpleasant "pretend" side of society.

Inviting the President
A family member was getting married and invited high government officials including the then-president, Gloria Macapagal Arroyo. I was taken aback and exclaimed, "You know her?". He said no, but his father-in-law could persuade the president to attend. I asked him again, "Why? and why the lavish wedding?". I didn't see his reply coming. He told me that he has done some calculation and he figured out the gifts would outweigh the cost of the wedding. My jaw dropped!

Thought Bubble
So much for the utter simplicity and innocence of "I do".

Meaningful Heartfelt Gifts
Am I cynic? Of course I am, when it comes to complying with an artificial value system that only enslaves all who participate in it. I like giving gifts when I feel like giving it - never because I have to. I usually don't have money so my gifts are in-kind but no less meaningful. I could remember a few:

Final Thoughts
As I travel, I might see something interesting that I know a friend would love to have. In a perfect world, I'd simply get it for them. But more often, it remains an intention. Either I don't have the money for it, I don't have the space for it, it's too heavy or I don't know if I'll ever see that friend again. But the intention remains. I think intention or volition is the most important element of them all.

To all my friends, best wishes for the holidays! I share you my merits. Please accept that as my gift. Namaste....Metta! And if you wish to gift me, your goodwill and air-hugz are more than plenty. Thank you!

Next stop: Goodbye and Thank You, Ubay