Cyber Monk Joke
I guess it would be accurate to say that Cyber Monk was a joke when I first coined the term inside my head. My Vietnamese traveling buddy even laughed at the idea (and so did others, but I do get the joke). But it was given substance when I left my last permanent address 4 years ago to live a nomadic life as a renunciate, armed only with my laptop and my web-skills to ensure my survival on the open road. With not enough money, no property and no address, I had been traveling around the Philippines and Southeast Asia, essentially, as a monk surviving on this laptop. 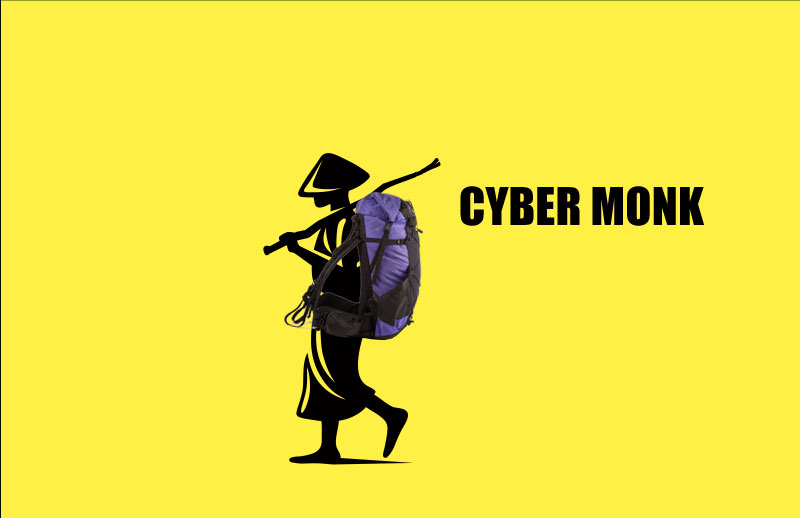 Wanna be a Monk?
With my 10-day Vipassana meditation courses and my current monastic life at Thai Plum Village in Pak Chong (Thailand), my friends ask if I want to be a monk. Somehow, staying real and sincere about my answer, I am compelled in all seriousness to say that I am already a monk...but I make my own monk rules.

A Conventional Monk Thing
Initially, it's abstract. Here's how I see it. I do have spiritual pursuits and I am in search of something bigger than myself. I resonate with a monk's aversion to material wealth or ownership, I embrace the notion of detachment and I live a life of nomadic mobility. That's the similarity.

One Size Fits All?
Here's where I differ. If I subscribe to any kind of monastic order, I will invariably find a few of its laws, rites or rituals to be inapplicable or even unacceptable. Every person is unique. Unique in his/her genetic predisposition, unique in his intellectual capacity to synthesize information into a workable life equation, unique life experience, unique body anatomy, etc. Unique everything! So how could one monastic order fit all sizes?

Not my Truth
Additionally, even the greatest monastic order was founded by a human being - it is not divine architecture. It was envisioned, developed and propagated by people who are great visionaries, living saintly lives whose way of life served as inspiration for many people. Indeed many beneficial lessons can be learned from these disciplines. I emulate what resonates - after all, why reinvent the wheel? Mindfulness as practised at the Plum Village is profoundly powerful and I will take that with me. The notion that my self-realization resides in me (and not anywhere else) is transformational and that is one of the great legacies of Vipassana to me. But just the same, the founders are of flesh and blood just like you and me. Whatever the doctrine, manifesto or dogma of that order principally is a by-product of the founder's unique truth that was selflessly shared for the benefit of many. But at the end of the day, I still have to find my truth.

My Truth
I also have my own unique truth - everyone does. With that truth and my realization of right and wrong as a validating benchmark, I forge my own rules to my private and personal monastic order. I create my own template compliant to my uniqueness. I have no name for my monastic order and it's not even necessary - it's not for public consumption. I allow myself certain liberties most monks are restricted to, and I impose certain restrictions some monks are at liberty to exercise. As I evolve, so will my rules.

Personal Template
In yoga, my teacher once said that as you deepen your practice, you will do less and less of other people's yoga and develop more and more, a yoga practice that is uniquely yours in full compliance to your individuality. That has been my tenet for nearly everything else - my own relationship template (platonic, romantic or family), my own monastic order and pretty much my own way of living life giving due consideration to constraints imposed by society, religion and government (e.g. - I still have to get a driver's license to drive a car). I draw the line up to what point I will allow them to make decisions for me (e.g. - I will not be a soldier and be shipped across the globe to kill someone who hasn't wronged me, my family or my country). To the extent I allow them, at least I am mindful of what liberty I am relinquishing and what liberty I am exercising.

Ending Thoughts
Some people need institutions to make decisions for them - they need it and they look for it. And other people simply want to take ownership of their destiny by exercising that control themselves.

TheLoneRider
(Mar 6, 2016) ...like I do not and will not subcribe to celibacy. It makes no sense for me to put a dam on the natural processes that took millions of years to evolve. Take a look at the Catholic priests. They take a vow of celibacy and rape kids behind closed doors. I'm just staying real, dealing with things I can work with...like the natural desire to share human warmth. I do not find anything wrong with that.

»» next story: First Day of Teaching English at Thai Plum Village
»» next Lucid Thought: Bank of the Philippine Islands (BPI)
»» back to Lucid Thoughts
»» back to Homepage