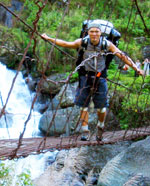 Mount Pulag
Our batch induction climb with the UP Mountaineers was set for the highest peak in Luzon and the coldest point in the country - Mt. Pulag. Rising 9,645 feet above sea level, it covers 11,500 hectares along the Cordillera Mountain Range encompassing the provinces of Ifugao, Benguet and Nueva Vizcaya.

There are several routes to the summit, but being an induction climb, we took the steepest route of all - the dreaded Akiki Trail. It's 25 kilometers long that takes a day and a half to climb one way beginning from the jump-off point just south from the town of Kabayan.

The Preparation
The last training run we did in preparation for this climb was 15 kilometers under 1 hour 45 minutes within the UP Diliman campus. For non-runners like me, it was gruelling. The side of my knees started hurting after 10K. It was mental persuasion from then on that pushed me through (with the aid of my pacing buddy). The pain after the run was intense...my knees were on ice. Luckily, I had a week to recover in time for the climb.

Ecological Zones
Mt. Pulag spans 3 ecological zones - the pine forest at the lower altitude, the mossy forest (habitat to the endemic cloud rats) and the grassland at the summit. A dwarf bamboo forest can also be seen close on the top.

Birthday Climb
I was celebrating my birthday on the summit of Mt. Pulag. How often does that happen? I never felt younger. The air was invigorating, and the view was spectacular. Top that with a crack mountaineering team who look after their own...I can't complain. This takes the cake. 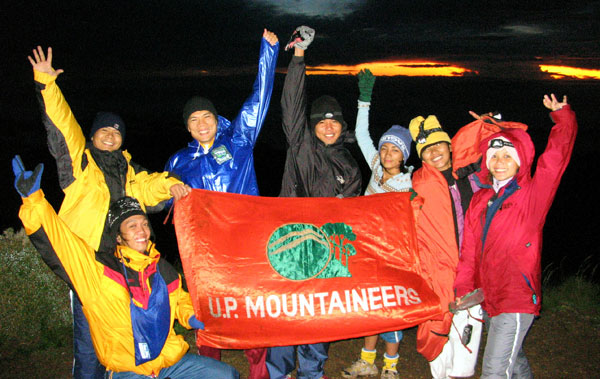 The Induction
After the induction rite, my wet body was uncontrollably twitching from the cold. My hands were numb and I could not even unzip my rain gear. I had to be helped.

The rite underscored the common bond and inter-dependence that galvanized us into this common pursuit. All the training climbs, the sacrificed hours, the mountaineering courses, first-aid workshop, etc., boil down to this. We made it. We're now members. In the mountaineering community, being a UP Mountaineer goes a long way.

Mantle of Membership
What does it mean to be a UP Mountaineer? Sure, it's bragging-rights...but earned. It means being fit, being disciplined, being on time, being a team-player, being an environmentalist, knowing first-aid, knowing ropemanship and knot tying, adept at starting a fire, knowing how to cook, pitch a tent and build shelter in the driving rain...I could go on and on.

Looking back at the start...to the applicant's orientation at the start of the semester, I can't help having that pride in me for having come a long way...many thanks in no small part to the selfless members and co-applicants who saw us through.

Ending Thoughts
As I looked at the vast expanse around me, I felt a profound humility that my insignificance is part of this grandeur. It affirmed once more a personal tenet that I am of this collective whole like everyone else...that my action invariably affects the whole...for better or worse. I came down Mt. Pulag with a deeper sense of appreciation to what mother nature has loaned us...yes loaned. It was never ours to own but ours to relish, preserve and nurture.

Ferch Santos
(26 Oct 2005) i love your write up about the induction. True that we had so much fun and it wouldn't have been complete without you hunky daddy!!

(14 Oct 2005) My very best wishes for you on your special day and may you be blessed with many more. Take good care of yourself in all areas, i.e., physically, spiritually, mentally, emotionally and whatever else. You're a libran, you're somehow gifted with that.