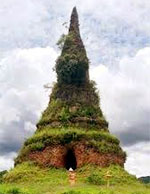 Heard it on the Grapevine
It was only in Mae Sot when I overheard some travelers talking about this obscure and almost unknown destination in Thailand, 5.5 hours from Mae Sot. They talked about a great waterfall, trekking tours, rafting, river splashes and a lot of nature. It reminded of my previous home in Sagada. It was enough to get me excited and pack-up.

Getting to Umphang
From the Mae Sot Divisional Market (Burmese Market), I boarded the blue songthao (going to the border) and got off at the Bus Station near the airport (B20, 10 mins). At the bus station, I went to platform #5 Umphang, and boarded the blue songthao (departure times 07:30 after every hour until 13:30, B140, 5.5 hours). The first 2 hours were on flat, the following 2.5 hours were dizzying mountain twists like a pretzel road, and the last hour was still curvy, but not as tight. One boy threw up at all the luggage in front of him, to the chagrin of the passengers! Best to have your Google Map activated when nearing Umphang so you know when to get off closest to your hotel before the songthao reaches its final stop. Better yet, show the driver where your hotel is, and he's likely to drop you off the doorstep.

Leaving Umphang for Mae Sot, go to the blue songthao depot at the Umphang Walking Street (see map). Departures are every hour beginning 06:30 to 13:30, B140, and only 5 hours! It should take you to the market and then to Mae Sot bus station near the airport (I don't really know since I alighted at Robinsons). 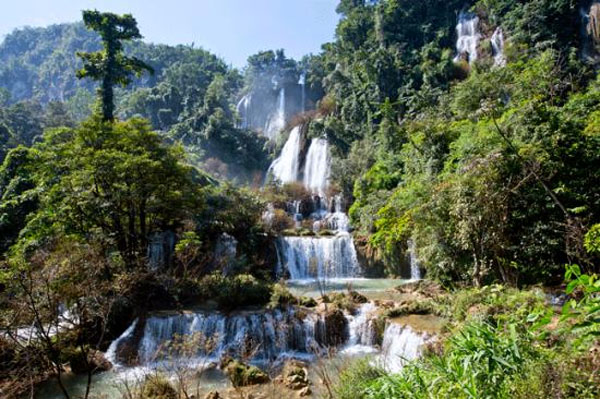 Umphang House
I first went to The Trekking Hill but it was full. Besides, the B100 dorm room was already replaced by the B350 single room. I tried my luck at the Umphang House and offered a deal - deep discount in exchange for blog advertisement. They accepted and that secured a roof over my head for the next 5 days without breaking my budget.

It's an expanse of land with several wooden pavilions with separate ensuite rooms. The place is clean and well-maintained by its hands-on owner. Rooms are spacious and beds comfortable. There is a common dining area where travelers can meet and get acquainted. Wifi is available everywhere, including the rooms. Mosquitos can be nasty, so bring your spray.

Umphang Museum
Surprisingly, this small town has its own museum - albeit a one room museum, commemorating the visit of the former king. Everything was in Thai. It's too bad. A museum is a good introduction to the world at large what their culture and history are all about, but if there is no English version of the text, that wealth of information becomes limited to the locals only.

Alternative
In hindsight, instead of staying at Umphang proper, I would have gone to the Umphang Wildlife Sanctuary and stayed there - an additional 40 km from the town center. That way, I would just be less than 2km away from Thi Lor Su Waterfall (the main attraction of Umphang) and the rest of its natural wonders. However, there is no public transport to the Umphang Wildlife Sanctuary. You will still have to arrange your private transport. A way around this is to talk to the hotel owners who are offering tours to Umphang Wildlife Sanctuary. You can offer payment and piggyback on a one-way ride. Do the same going back, or hitch-hike. Locals are friendly, and I didn't have a problem hitch-hiking to the Kao Hua Mod viewpoint.

Ending Thoughts
The main deal about Umphang is really its natural offerings - waterfalls, river rafting, caves and trekking. Beginning at B1500, and reaching B4000/pax for a 3-night tour, it's a little pricey for my meager budget. And, it's not something you can DIY (do it yourself) either. The main waterfall is 40 km away through the forest - you can easily get lost! And even going to the Umphang Wildlife Sanctuary is not available through public transport - you either have to join a tour or charter a private transport. But all those who took the tours and came back had a smile on their faces you cannot remove.

I guess I came 5.5 hours all the way to Umphang, spent 5 days, only to walk around town and eat. But hey, that's what a nomadic lifestyle is all about - win a few while still being grateful for the revelation of a new destination (discovering this awesome Karen dish, Gheng Cua Karen, discovering a hidden Vipassana temple), even if the waterfall desires were unmet.

»» next story: Trekking Kao Hua Mot Viewpoint
»» next Traveling story: Post-Umphang Mae Sot
»» back to Traveling
»» back to Homepage