Bush the Devil
After viewing the meticulously researched film documentary, Zeitgeist, and learning that the USA sends Economic Hitmen (Option A ) to corrupt/threaten/extort heads of sovereign states who oppose the US's unilateral economic and political manipulation in their country to further its world dominance, and later on sends in the Jackals (Option B) to assasinate if option A fails, I couldn't help but think that Venezuelan President Hugo Chavez would soon be dead of "natural causes" after delivering a speech to the UN Assembly in September 2006 where he called then-US president George W. Bush, the "devil". 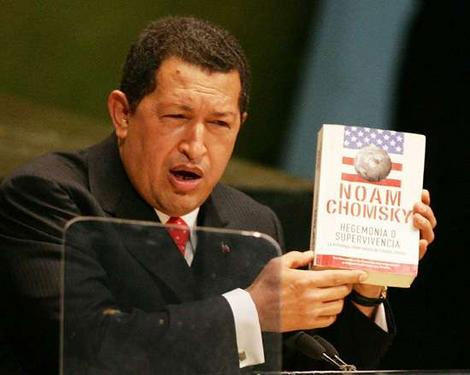 Latin American Leaders Dead of Cancer
Chavez has long been a critic of the USA and its foreign policy - that is of public record. True enough, Hugo Chavez is now dead of cancer. I thought I was the only one who entertained that thought. But I stumbled into a news article about Russian Communist Party head Gennady Zyuganov asking why 6 leaders of Latin American countries who oppose the US are simultaneously suffering from cancer now.

(Apr 8, 2013) Chavez was a great leader, and yes Bush (and his lying replacement) = the devil! Lian Lim
(Apr 8, 2013) This could be way-out-there perverted thinking for some, but biological warfare can be very real. I guess we'll never know.