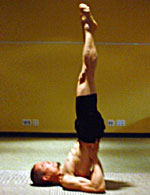 My Introduction to Yoga

AIM Mutual Funds
At AIM Mutual Funds where I was working, we had a whole floor just for fitness. Every once in a while, management would offer a perk, one of which was free yoga classes by Kiran Sohal. My life was never the same after.

Kiran Sohal
Kiran was a young and attractive Indian yogin who comes from a lineage of Ashtangi yogis...her father and her father's father. Back in the day, there was no Yoga Alliance and I don't think she subscribes to the idea of having a newly founded 'yoga government' validate her practice - I cannot agree more. She was my first teacher and it was my first introduction to yoga. Her classes consisted of the Primary Series...to the extent we could do it. It was the same class the whole time - as Ashtanga Yoga would not allow any deviation from its set sequence. Her teachings were strictly asana. For so many years, even after she left the company, I thought yoga was just Ashtanga asana.

Why Yoga?
From a lingering curiousity, since the word 'yoga' was being bounced around for decades, I participated. Besides, I was a fitness buff and any FREE offering by the company, I would take. 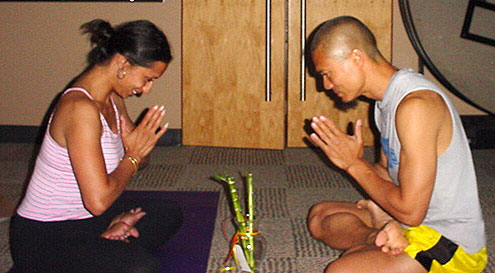 My Practice
I was a devout student...going further than anybody in the class. Even on days when there was no class, I would practice on my own. In fact, I reveled in it. I didn't even struggle in the initial stages. I was a natural. It's like I've known yoga all my life and all I needed was a reminder. Analogy? Let's just say I've never riden on a bicycle and when I got my hands on it for the first time, I sped away without the need for training wheels. Yoga and I were a perfect fit.

Ending Thoughts
Even though Kiran left the company, I continued my practice. With no teacher, I used David Svenson's video and later on when I discovered Power Yoga by Bryan Kest, I switched or mashed it up.

I am writing this story in Jan 2023...a good 22 years after. Now, my yoga has evolved, incorporating many facets of fitness - the Wim Hof breathing/icebath, calisthenics, HIIT, Isometric holds, holds of Strong Determination, etc. Anything I see as a fit to my practice, I incorporate. But no matter how the physical practice mutates, the breathing and mindfulness are always there - that's my benchmark. And for validation, if my practice is still sound, I can say that at my age, I remain strong, disease-free for decades, forever young and harmonized with the environment.

I can speculate that perhaps in a previous life (yes, I believe in reincarnation), I was once a yogi. This life is simply a continuation of what came before.

Thank you Kiran Sohal for paving the path to my yoga journey.