A First Timer in Chiang Mai

Mountain Town?
I long heard about Chiang Mai as the mountain town of Thailand where the air is cool and crisp. Somehow, images of Sagada came to mind. But with only 14 days given to me for Thailand (over land), it was hardly enough for more than one destination. So I defaulted to Bangkok on my first few visits. Finally, since I just spent time in Bangkok not over a month ago, I could spend my next 14 days in Chiang Mai. Upon arrival though, it was a surprise awakening for me - Chiang Mai is a big city!

Struggle
In my energetic parlance, when there is a struggle, it's a hint that something is not right. I felt that with Chiang Mai even as I started heading for it from Bangkok - fully booked train, fully booked hotel, night border crossing with no bus on the other side, bad hostel on my first night, etc. I was beginning to wonder why I even bothered to continue. But the struggle only lasted the first week. What followed was abundance. I'm glad I decided to stay on. 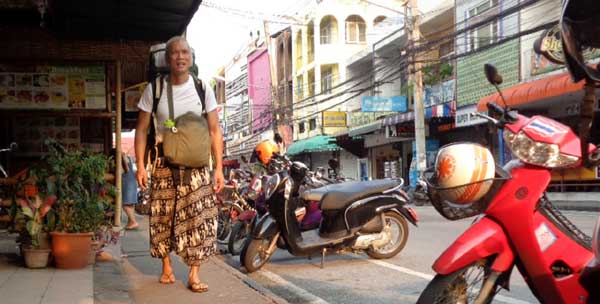 While walking along the street, I happen to pass by an interesting establishment. It didn't even look like a hotel but it was, plus a cafe. It was only 2 months since they opened. Everything was new. I asked to talk to the owner about a barter deal. He liked my plan to put the word out about his business and in return, I got to stay in his 2 hotels, including breakfast, massage and coffee from his Caffeine Fix Cafe. The quality of the service and product from these establishments are first rate and impeccably delivered by a perfectionist. I am glad to be working with such people. That stroke of good fortune seem to turn the tide for me. Everything else after that was characterized by abundance.

The Frenchman from Toulouse
While staying in a budget B100/night dorm bed hostel, I met a fellow hostel guest, a Frenchman from Toulouse. He said he was traveling with no money and finding ways to survive on the road. I was thinking, "He's like me!". He left that night and came back at the crack of dawn. Around 9am, the hostel owner barged into our room and yelled at the Frenchman to pack up and get out. She continued yelling how the Frenchman promised to help clean up the place in exchange for free lodging, but he was still asleep at 9am after partying the entire night. The Frenchman hurriedly packed-up and was gone. I saw him again after a few days coming out of another hostel - scruffy, disheveled and looking dazed. In the meantime, I was already staying at the $100/night luxury Nawa Sheeva Hotel. Again, I couldn't help but contemplate. I am just like him - no home, no money, no job. But he ended up being thrown away and I end up lavished with luxury offerings. Did God just play dice? Or is there a natural law governing all this? How could two people in the same predicament end up on two separate ends of the spectrum?

The Wooden Elephant Puzzle
In Siem Reap, I bought a wooden elephant 3D jigsaw puzzle and I didn't really know what to do with it. Upon unpacking at Nawa Sheeva Hotel, I placed it on top of the tv stand together with some fixtures. It blended in. Having had a wonderful time at this hotel, it felt fitting to leave the elephant there where it seemed to find a comfortable home. It's my thanksgiving to a place that offered a roof over my head. Hotel staff later called my attention that I left an elephant after my checkout. I asked them to leave it there.

Bike LED Rear Light
When I saw a LED rear bike light for cheap, I purchased it and installed it on my rented bike. I forgot to get it back upon my return of the bike. I didn't like the owner for playing hardball, which made me want to get the light back even more. Then I got the nice hotel deals. With this abundance, getting the bike light back didn't seem too imperative. I was thinking...it won't benefit the bike owner since he doesn't use the bike. But it will benefit the next renter. I let it go. Pay it forward.

Ending Thoughts
Chiang Mai was a big blessing. I can't really ask for more. A guy knowing no one with little money in a strange place ends up living in lavish hotels, Eggs Benedict for breakfast, dips in a salt-water pool, enjoys coffee from a $26,000 top-of-the-line coffee machine, gets kneaded like a bread dough by an expert Thai masseuse, participates in a Dance Mandala and meets the most interesting people - without spending a cent! What can I say? I remain humbled at all these blessings. The more I receive, the more I want to give back. Thank you Universe!

Arun Suite - 3 bedrooms in a 3-storie guesthouse within Old City, ideal for families

»» next Traveling story: Border Crossing - Mae Sai (Thailand) to Tachileik (Myanmar)
»» back to Traveling
»» back to Homepage