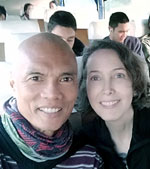 An Invite to Mae Sot
With Suzi's re-visit to Chiang Mai, I was invited to travel with her to Mae Sot, the place where she devoted a few months of volunteer service to an NGO for the welfare of the Burmese refugees. Of course I said Yes! I haven't been to Mae Sot, it would be nice to be away from Chiang Mai for the holidays, and I will be spending time with Suzi.

Mae Sot
Mae Sot is a 6.5-hour bus ride south towards Bangkok, from Chiang Mai. It is a border town with Myawaddy, Burma and has seen a lot of Burmese economic migrants and refugees. As a border town for vulnerable refugees, Mae Sot has been a hub for human trafficking and the drug trade as well. There is a large settlement of Burmese people who have already established themselves there - Burmese market, Burmese eating places, wholesale gems and teak, etc. The refugee situation 10 years ago sprouted NGOs and international aid agencies by the dozens. Mae Sot was rife with humanitarian activities. However, now that refugees are no longer accepted by Thailand, the NGOs have likewise dwindled, making Mae Sot, back to being a sleepy town. Lately though, Chinese money is being infused into the local economy. Mae Sot is set for transformation.

Suzi
Suzi and I have always gotten along well, but we haven't traveled together. Not yet. And you know what they say about putting friendship to a test - travel together and you can crumble the most vault-solid relationships. No arguments, no unmet expectation, just a flow while we explored the narrow streets of Mae Sot. We differ with our eating choices but we did it her way as much as mine. I'm more pedestrian with my eating choices - cheap local street food. We weren't really traveling like backpackers on the open road. She was more my host, guiding me around, taking me to her favorite or memorable places and introducing me to her friends. Verdict? In our case, all went well - great bonding, great sharing and definitely time well spent together.

Christian Missionaries
Part of Suzi's visit to Mae Sot was to see her Christian missionary friends again. Alison wasn't in town but let us use her house for the entire length of our stay. Joan and Peter, a lovely couple who has been doing a tremendous amount of work in Mae Sot for the longest time, took care of us - picking us up to and from the airport, and driving us around for lunch and dinners. In the ensuing conversation, I got a sense of their unwavering commitment to their faith. Unlike most priests who just talk within the four walls of the church, these missionaries roll-up their sleeves and get down and dirty to get a thankless job done. I've long been disillusioned by the Catholics and Christians, but these people redeem that idealism that has long been lost to so many. 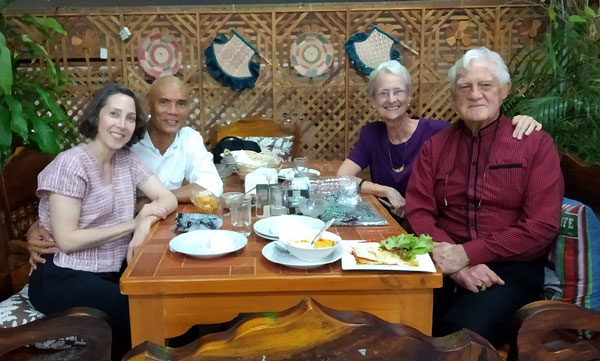 Activities
There isn't much to do in Mae Sot. There is the Burmese Market, but it's just like any other wet market in Thailand. There are good eating places though - the Lucky Tea House, Mughal, the fish tank guy and that manicured garden resto, the Jungle Restaurant. It's lavish enough for THE princess, who once graced the place. There are a few bars. One such is Krua Canadian, better known as Canadian Dave. But it's such a lonely place that seems to attract sad people. One upscale bar is Woodstock with live music beginning at 10 pm, but the acoustics were bad - hard to appreciate the music. Well, from the few days we were in Mae Sot, that's what I've seen.

Karen Tribe Wedding
Suzi and I attended a Karen wedding. The feeling was tribal where people could say their piece to the couple. There was an emcee and a band. Friends took turns singing and wishing the couple a happy life together. Advice and insight were shared by elders who've seen it all. Tribe members need no invitation. Tradition dictates that any tribe member can simply attend the wedding and partake of the ceremony. Some came from 2 days bus ride away. Since nobody knows how many people will come, relatives pitch-in for food and expenses.

Coming from a Catholic background where weddings are muted and only the priest presides over by reading from a text (which I find utterly mechanical and perfunctory), I find the Karen wedding much more meaningful and purposeful.

Ending Thoughts
Mae Sot is not the place you go to for tourism. But maybe it's a good place for a visa run, being a border town. But I gained a few wonderful insights during my short visit. I learned that there are these missionaries who dedicate their entire lives in the service of humanity. I learned about the intimate tribal interaction of Karen people during a wedding. I've heard (not seen) about the compelling issues facing the refugees and the frustrating work NGO workers endure just to make a difference. And of course, Suzi. What can I say? She's been generous, considerate, and mindful of my presence on the trip. I've walked away before from someone I was traveling with, but with Suzi, again the seamlessness is apparent. I'd travel anytime with her. Thank you Suzi, thank you Joan and Peter, and thank you Alison. And to the newly wed Karen couple, I hope you have healthy and bouncy kids.

MissionzHeart
(Jan 10, 2020) We were touched and humbled by your kind words. We are the lucky ones getting to serve our Lord here.

»» next story: Friends, Coffeemates and Breadmates (Dec 2019)
»» back to Traveling
»» back to Homepage