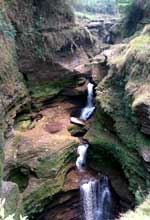 History
In July 31, 1961, Mrs. Davis, a Swiss citizen and her husband were taking a bath in the falls. She was swept away by the water and suffered a high fall. Her body was eventually recovered but not easily. Since then, the falls had been named Davis Falls (also Devi's Falls).

Devi's Falls
Devi's Falls, locally known as Patale Chango, is fenced-in to keep the same thing from happening again. It stands 100 ft from the pool deep down in the gorge (cannot be seen). It also extends another 500 meters into a tunnel. The water direction points to another tourist attraction, the Gupteshwor Mahadev Cave, where it possibly passes through.

Ending Thoughts
The falls itself isn't that spectacular specially with the fence limiting what is seen. But if you're in the area, why not? There is also the cave which is just across the street.

»» next Traveling story: Visiting Gupteshwor Mahadev Cave, Pokhara
»» back to Traveling
»» back to Homepage