Yoga in Kathmandu
Feeling settled in Kathmandu, I wrote to several yoga studios introducing myself and informing them what I can do for them - teach a class, write about a class, fix their yoga website, etc. One of the studios that replied was Madhab Prasad Dhakal of Sawar Yoga Studio. 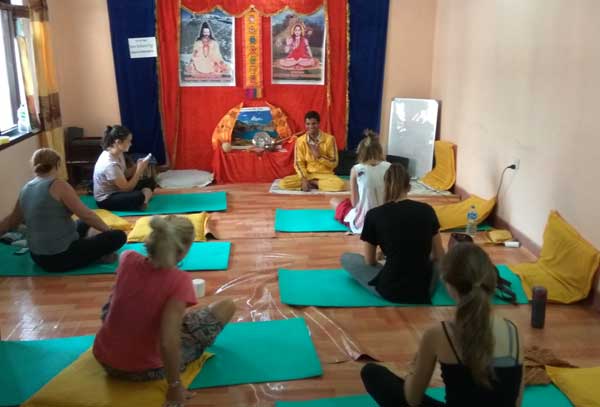 Hatha Yoga
The session started with a lot of stretches to warm the body up. Breathing was integral into the poses. On a lot of poses where it was held, the breathing was also held - technically, a Kumbhaka. The session was easy perhaps due to a majority of the attendees being first timers. No difficult poses but more on stretching, limbering and a little cardio (high knee taps, butt kicks, etc.)I would be more interested in the intermediate level of Madhab's Hatha Yoga where I find myself a little out of my comfort zone. A few fumbling and stumbling on my part tells me I'm deepening my practice.

Big Plans
Madhab wanted to involve me in his ambitious project in propagating his yoga - a global presence for a global reach. I was confident how useful I could be, but begged off. It would have demanded a lot from me and for that kind of involvement, I would need more connection with him and his practice - which I didn't get.

Ending Thoughts
His yoga is a little different from what I've seen in the usual studios, but not necessarily different from what I do with my own practice. When not doing asana, I default to cardio workouts, calisthenics and isometrics, all of them synchronizing breath with movement. Madhab's yoga had a little of bit of those elements. More critically however, it was the language barrier that proved most challenging. With yoga cuing, what I find more important is the verbal articulation of the subtleties of breath, movement and mindfulness. This can only be achieved when language is not a barrier.

Thank you Madhab for accommodating me in your class.

Next stop: Vinyasa Yoga with Dipendra at the Mandala Yoga Studio and Spa, Kathmandu

How to get to Thamel (Kathmandu) from the Tribhuvan International Airport

»» next Yoga story: Vinyasa Yoga with Dipendra at the Mandala Yoga Studio and Spa, Kathmandu
»» back to Yoga
»» back to Homepage