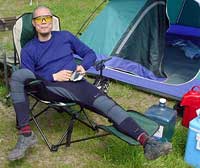 Bike Race Like No Other
Normally, a mountain bike race is always sweet...steep uphill climbs and torrential rains and all that jazz. But to say that Chico's Epic 8 Hour Race is sweet would be an understatement...more like magical. Just imagine... everything right than can possibly happen in a mountain bike race happened in this single event. The weather couldn't be more perfect...cool with an abundance of sunshine. Trails? Accolades should go to Sean Ruppel for this. It was chock-full-of-singletracks! They were gnarly with a lot of switchbacks. There was a just enough fire trail to make a pass or to let others pass and it's back to the single track. The climbs were brutal but doable. They were also conveniently spaced so you get to recover before the next climb. Everything about the trails seems to be measured to being "just right". The down hills were bumpy and equally steep with the right amount of drops and ruts to keep that adrenaline going. As expected, the entire event had a competitive but festive and friendly atmosphere. The fact that things went smoothly only ascertains that the volunteers all did an excellent job. The venue had ample grounds for the teams to spread out their gear with space to spare. 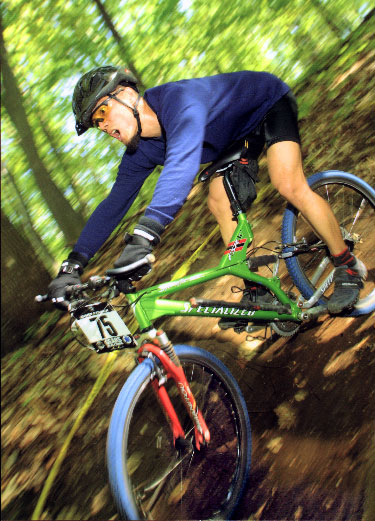 Prizes
According to Chico, there was $6,000 in door prizes (or maybe I heard wrong) but they gave away 2 $1000 Rock Shox forks and a Gary Fisher bike! That's all on top of the little stuff like gloves, Power Bars and the like. Another thing I like is they let you keep the number plates. To some it's no big deal. But to most (well, maybe it's only me), those are bragging rights. That's the stuff you put on your wall (at least on mine) with the rest of your mtb pictures.

Noah Fallis
Another flavorful ingredient in the racing scene is Noah Fallis. I noticed his presence the first time at the Gnarly Charly race last May 5th in Ajax. Okay, you may not know him but if you've seen the van with a big green sign that reads "Race Photos", that's him. I have hundreds of pictures of me on a mountain bike but nothing comes close to the quality of his shots - studio quality exposure and perfect panning with subject in sharp focus while the background is motion-blurred. I bet every rider out there has long yearned for that perfect action shot...but never gets one. This cool dude who obviously knows what he's doing changes all that. Price-wise, it's not a bad deal considering you now have something to show your grandkids what kind of a hammerhead his grand daddy/mommy was. For those of you who missed this altogether, you may have a race shot with him just waiting to be printed. You can check out his site at http://www.noahfallis.com/mtb just to be sure.

Ending Thoughts
Altogether, everything was great and kick-ass! However, if I'm allowed to do a wish list, it'd be nice to have a free tune up booth, portolets and free after-ride massage. How about that for the next event, Chico?