Next to Chiang Mai, Chiang Rai is the biggest working city in Northern Thailand that offers urban amenities plus a lot of nature. At 390m above sea level, it's nestled on a mountainous terrain with the outdoors and numerous trekking possibilities. It serves as the hub for neighboring small cities like Mae Sai, Chiang Saen and Chiang Khong on the Golden Triangle. It has its regional cuisines like Khao Soi, which has its unique flavor from that of Chiang Mai's. 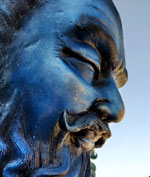 (Nov 27, 2019) Blue Temple, before it was renovated and colored blue, used to be an obscure and dilapidated temple that was patronized only by locals - just one of the many temples sprinkled around Chiang Rai. Now, you see hordes of Chinese tourists who cannot get enough selfies of themselves with the temple's imposing and unique blue.....more »» 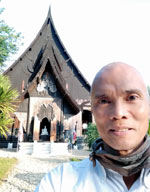 (Nov 26, 2019) Black House is a rather dark-themed museum consisting of numerous black building structures in a sizable land area. There are a sprinkling of animal bones, skins, rock gardens, wooden carvings and interesting architecture.....more »» 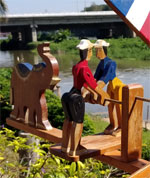 (Nov 26-28, 2019) It has been 3.5 years since I visited Chiang Rai. While doing a visa run to Tachileik, Myanmar, to took a 2-night stay in Chiang Rai before heading back to Chiang Mai. I didn't realize how much I needed that break until I took it...more »»

(May 11-16, 2016) Next to Chiang Mai, Chiang Rai is the biggest city in Northern Thailand that offers urban amenities plus a lot of nature. I've heard many great things about this place that I had to come back to Thailand to experience this place (and Pai). With roughly 6 days, I set about to explore this destination.....more »» 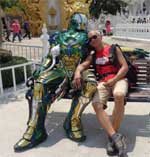 (May 15, 2016) Wat Rong Khun, better known as the White Temple is Chiang Rai's biggest crowd drawer. Temples are usually gilded in Thailand, or the rest of the Buddhist world for that matter. But an iconoclast artist broke the mold and built a Snow White Buddhist temple 13 kms south of Chiang Rai City. It's the first installment of many. The entire project is set to complete in 2070....more »»