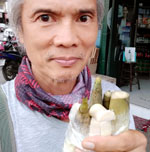 A First-Timer in Loei, Thailand

Moving on from Chiang Khan
After 8 days in Chiang Khan, it was time to move on again. Practically, the only way out of Chiang Khan and into the rest of Thailand is through the main city of Loei. What's in Loei? I don't know but I feel good about it.

King Hotel
Problem is, the cheapest lodging in Agoda is B350 at King Hotel. It's way beyond my budget of B100/night. I know, for most travelers, B350 a steal. But for a budget backpacker who can't see where the next money comes from, it's a money pit. Usually, I just bypass the destination and continue to another place where I can find a friendlier price. But again, I felt good about Loei. I had to take my chance.

As the cheapest room, I was expecting a dump. But no, the room was more like a B1000/night room - a/c, flat-screen tv, fridge, ensuite and queen size bed! I didn't feel too bad about staying here. If I can't make a deal, then I'd check-out the following day. At least that's the plan.

I made a pitch to the manager, but again, being the manager and not the owner, the chances were very slim. Nothing came out of it. Perhaps it was fortuitous as well as I didn't see more to Loei to make me stay longer. 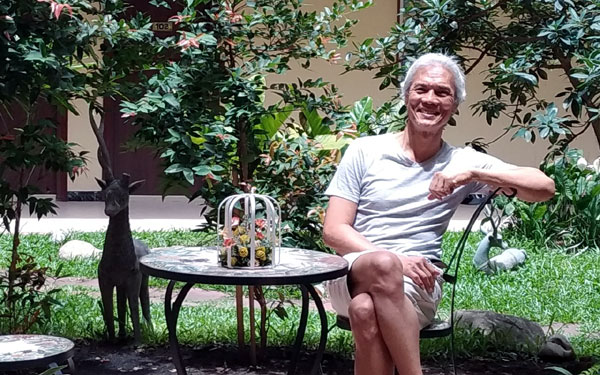 Loei City Proper
After walking around a few blocks, the sense I got about Loei was its functionality. Its been around with an aging infrastructure. Loei is what you might expect of small provincial cities who have seen better days. I would say however, that Loei is well-maintained and well-thought through. It's clean and you don't see peeling paint on its buildings. There is a bike lane on the major roads. The park is manicured with the laborious figure-trimming of the trees, you would think Edward Scissorhands was there.

Needless to say, this is not a popular place for tourists. Loei is a working city where people make a living supporting their families. This city supports the needs of the satellite towns for hardware, and big items not available in their villages. But you can make this your base to explore the other offerings on the outskirts.

For tourism offerings, you need to go outside the city limits - the provincial parks where you see waterfalls, and a lot of nature. The satellite towns like Chiang Khan and Dan Sai are likewise charming.

Where Next?
What's next? The plan was to take a bus to Phitsanulok and transfer to another bus for Phrae. What's in Phrae? I don't know, but the hostel owner in Chiang Khan said I should stop by Phrae and Nan on my way to Chiang Mai.

But the bus was already full for Phitsanulok when I got there. The staff told me that I could still go to Phrae by taking the bus for Chiang Mai and get off at Phrae. What? A bus for Chiang Mai? Finally, after looking for a bus to take me to Chiang Mai since early May, the schedule landed on my lap. This changed everything. I got a ticket for the 8:30pm for Chiang Mai. I messaged Mike about my change of plans and he made plans for my arrival and accommodation to my old haunt, the Nawa Saraan.

Ending Thoughts
Initially, I thought I could stay a full 7 days but with no hotel deal and with nothing much happening within the city, I had to cut my stay short to an overnight. At least I had a stay in an a/c room - something I was longing for during the previous hot months.

As for Chiang Mai, I could say the universe intervened. I had to ditch my plan for Phrae and Nan to accept this opportunity - back to Chiang Mai. I wonder what imperative awaits me in Chiang Mai for my universe to put my other plans on hold. 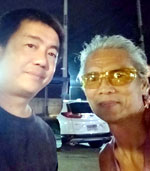 Coming Back to Chiang Mai

(Jun 29, 2020) Not unlike Odysseus (of the Iliad) who spent the next 10 years trying to reach home after the Trojan War, so were my frustrated attempts at coming back to Chiang Mai after the burning season - but my sojourn only lasted 2 months. Because of the Covid lockdown, it wasn't possible. In a stroke of luck, I came upon a bus trip for Chiang Mai without me even looking for it.....more »»

»» next Traveling story: Coming Back to Chiang Mai
»» back to Traveling
»» back to Homepage