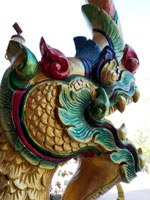 Hidden Temple
I was told by a local that there is Vipassana temple hidden within the forested area of Umphang less than 3 km away. Really? I set out on foot to find out where this temple is. Perhaps even meditate or sound its gong.

Wat Panit Niramol
All the while, I thought there was only one temple within the immediate area of Umphang Proper - Wat Panit Niramol. I would go to this temple almost every day and spend a few minutes meditating. It's good to know there is a Vipassana-specific temple not too far away. I know I'm being silly. It doesn't matter if it's a Vipassana temple or even an Islamic mosque - as long as I can still sit and meditate.

Pasak Vipassana Temple
Heading in the general direction of northwest from the town center, already into a forested area, I saw the first glimpse of the temple - almost a silhouette between the clustered tree trunks within the forest. It looked different from most Buddhist temples. Instead of towering golden stupas, it was more like a dark-stained lacquered log cabin resembling Noah's ark - without the boat. 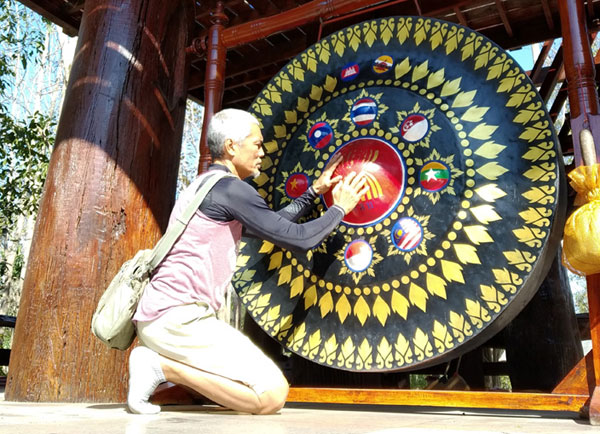 Attention to Detail
Just by the doorstep, I could already see the ornate art that went into the temple. Even the wooden posts and beams were meticulously carved with full-color spectrum. Individual wooden window panes had color carvings and decorated with complex patterns. It's typical for Thai temples to be adorned, but this one is marginally more than the average. It even felt like there was an obsession to all of it. At the main altar were 3 Buddhas and a statue of a monk on the foreground. He must be an important monk. I just wish there were English inscriptions too.

Ending Thoughts
Increasingly, I had been incorporating temple visits for meditation in my travels. Before, I would only meditate on my bed or do a 10-day meditation course. But with so many temples in Thailand, why not stop by one every day to still the body and mind...and also to give thanks for being in such a beautiful country with lovely people? Moreso now, meditation is an increasing part of my travel horizon - doing my 20-min pranayama and 20-min meditation first thing when I wake up, and now, stopping by a temple for another more meditation.

Mindfulness Gong Bath in Chiang Mai
(Feb 15, 2020) To sound the gong...try the smaller knob (the country flag). I found that if the gong is more than 150cm, we should rub out the eight small knobs.

»» next story: Post-Umphang Mae Sot
»» back to Meditation
»» back to Homepage