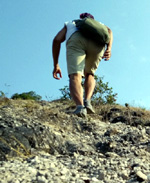 DIY Trekking
One of the DIY attractions in Umphang is the Kao Hua Mot Viewpoint (aka Doi Hua Mod) - a scenic view from a hilltop 9 km away on paved road, and 1 km on foot by loose-gravel trail path. My last hike was the Monk's Trail in Chiang Mai. This would be a good one to try.

By Bicycle
I allotted 2 hours of trekking there, but when I realized I could borrow the hotel bicycle from Dayt (hotel owner), I thought I'd be there in 20 minutes, so I started late. Big Mistake! I didn't realize that most of the way was uphill. My bike didn't have gears and it was really just a simple bike with questionable road-worthiness. I ended up pushing my bike almost the entire time, which took me longer. After 6 km of pushing, I realized that I would already run out of sunlight on the way back. I miscalculated badly. I had to turn back. Pushing my bike up the hill for 6 km with nothing to show for it? Frustrating! The ride back was all the way down but even that was a concern - would my brakes hold-up? I had to feather my brakes when it was going too fast.

By Hitch Hiking
Still not deterred, I thought about hitching the following day. While waiting for a ride at Highway 1090 at 8:30 am, I got to talk to Sain, a gentleman who owned the 40-room Wiriya Village. He was kind enough to flag down a vehicle for me and talked to the driver to give me a ride. It was really nice of him - it was a signature Thai kindness that has benefitted me so many times in the past. The Thais are simply endearing people.

The Climb
Surprisingly, the pick-up truck dropped me off at KM 9, still 1 km short of the access point on Google Map. But there was already a visible trail going up the peak. I just assumed that there was more than one. I started climbing up the steep trail. It was sandy, stony and slippery. My flat-sole rubber shoe was not ideal so I had to be careful. It wasn't a long climb, but I got winded out. Gone are the days during my active membership to the UP Mountaineers when I would carry a third of my bodyweight for 2 days to a mountain's peak. Climbing down was even trickier as all climb-downs are - I was more careful. It would be unsafe to climb this without sufficient light (as in catching the sunrise or climbing down after sunset).

The View
I guess it would have been more dramatic if I arrived shortly before sunrise or sunset, but no, I was there at 9:30 am when the sun was already high. The view was more mountains, with its mountain range horizon layered over each other. There seemed to be a thin fog draping over the range, although it was already hot, so I'm not sure what that haze is. I've seen some bonfire remains, so I'm sure it would have been a good overnight campsite. This reminds me of the stunning mountain views I've seen during my travels - the fog-draped village of Antadao in Sagada, Philippines, the open mouth of Mount Kanlaon in Negros Occidental, Philippines.

Ending Thoughts
Apparently, there is no one Hao Kua Mot peak. There are many and equally as many access points to it. But they are more or less clustered together. I arrived at 9:30 am when the sun was already high up and it was hot with no shelter. Ideally, it would be good to be there either for the sunrise or sunset. However, getting there when there is not much light or coming down when the sun has already set could be tricky as the trails are sandy and slippery. Perhaps the other trails would be better. I've only tried this one.

This adventure brings back the joy of travel again...meeting Good Samaritans (Sain, Dayt and the pick-up truck drivers), hitch-hiking, trekking to a summit and getting to enjoy a great view. Life is good. Thank you Umphang and thank you to all my Good Samaritans!

Next stop: Food in Umphang