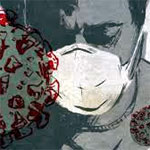 Covid 19 Update
As the world is gripped by Covid 19, international borders were locked-down. People were quarantined. The army patrolled the streets. No one is using the word, but this is Martial Law. Thailand issued a nationwide lock-down effective Mar 26. Curfew was imposed. Malls and markets were closed down, except for those selling food and essential goods. People were discouraged from going to public gathering places. Practically everyone wears a mask and you can be denied entry to pharmacies or even fresh markets without one. There has been a mass exodus of locals out of Bangkok back to their hometowns. Nong Khai keeps steady and calm despite the global panic. Tourism is dead. Hotels and restaurants are empty. The only foreigners you see about town are the resident expats - mostly retired guys with Thai girlfriends. But even for them, it's tough as all bars have closed down. Here at Mut Mee Guest House, the hotel officially closed down but the few remaining guests were allowed to continue their stay. We were advised to keep social distancing between guests and avoid the food stalls by the hospital.

Who Gets Hit?
Young and healthy people who contracted the virus experience a bout of flu symptoms, but recovered - they don't die, but by going through the ordeal, they develop the immunity from the virus. The glaring exception to these are the caregivers who are on the frontlines. It's understandable. Analogy: if you are healthy, you can survive a few stings of the dreaded African Bee. But if you are inundated by stings from the entire colony, you don't stand a chance. That's how it is for the frontliners - bless them for their service to humanity. Super healthy people contract the virus but show no symptoms. They develop immunity to it even though they were unaware they got it. Of course, they were still liable to pass it on to others - thus physical distancing remains a must for them. Moral of this narrative? Just stay healthy. Develop healthy habits - eat right, sleep right and think right. You want a competitive edge? Pranayama!

This might sound callous, but while I am strong, I would rather contract the virus now and develop immunity to it so that when the next wave hits, I'm already safe. And this is how humanity has survived the plagues of the past and continued as a species anyway.

Surrounding Conspiracy Theories
Because of its global magnitude, everybody is talking about Covid 19. Conspiracy theories abound. There are many, to wit:

Mainstream Media Overkill
I know it's serious and people have died. But those who died were old people in their 70s who had compromised immune systems to begin with. Why not just keep them protected and isolated from the outside world without disrupting the lives of everyone on the planet? Already, borders have closed, schools have been canceled, businesses have shut down, countries are on lockdowns and people are practically on house arrest. The mainstream media are pouring gasoline into the mayhem by casting fear and panic. When the mainstream media goes all-out to sell something, that's my cue that there is an underlying agenda. It's an overkill. The public has shown no resistance nor exercised critical thinking. At this point, they will even beg to be vaccinated. And I could almost be sure that the vaccine was already developed even before this outbreak began. It's all playing out like a script. This all seems like a dress rehearsal to size-up public compliance for a "Phase II". This is too Orwellian towards a global new order - call me a conspiracy theorist, but the seemingly unrelated events all point out to the desired outcome of global control.

David Icke
Most of the conspiracy theories are plausible. But from all the arguments presented, I find David Icke to be the most compelling. He was publicly ridiculed on national tv when he came out with this conspiracy theory 30 years ago. He was a laughing stock and widely regarded a cuckoo. But what he has been saying for the last 3 decades is playing now like a script. His dire warnings are now prophetic. Today, people come out in droves to fill stadiums just to hear what he has to say. He has become so influential now that Youtube even pulled down his interview by Brian Rose. To those who still dismiss him, he is in his full right to say, "I told you so! You had been warned."

The very words "conspiracy theorist" was coined none other than the CIA to discredit its detractors. I am of the opinion that those who still believe that their governments are acting on their best interest are grossly naive. The elite cartel has corrupted governments - it doesn't matter if the president is Democrat or Republican, doesn't matter who makes the law. Just look around - "too big to fail", corporate bailouts, ancient civilizations bombed out of the map in the pretext of freedom and democracy. A high school dropout would see through that.

Orwellian Order
If this is a calibrated move towards an Orwellian world order, then I guess the public has shown complicity to validate the 'next step', whatever that may be. In the end, I think the Chinese system of a no cash society will be globally adopted where people who toe the line are given social credits - they would be essentially pushed out of the grid or become social outcasts if they do not comply. Refuse to be vaccinated or refuse the chip implant, and that's where you end up. You have the digital card but no establishment will accept you. Where do you buy food, clothing and pay for shelter?

Do the Work
I don't feel the need to do a play-by-play of how these things reveal a dire picture. I'll give you a set of links that are either fact-based or simply too compelling to ignore. But don't stop there. Look around. The word is already out there to anyone who wants to know more. There's a glut of conflicting versions out there and it's hard to discern which broadcast is deceptive propaganda, which are fraudulent studies, and which are psychological operations. But be informed and make an intelligent conclusion on your own. Don't let mainstream media make that decision for you.

(Apr 13, 2020) David Icke visited a psychic who he said told him he had been placed on earth for a purpose and would begin to receive messages from the spirit world. These events led him to announce the following year that he was a 'Son of the Godhead' and that the world would soon be devastated by tidal waves and earthquakes, a prediction he repeated on the BBC's primetime show Wogan. The show turned him from a respected household name into the subject of widespread public ridicule.

TheLoneRider
(Apr 13, 2020) What happened to him 30 years ago is a matter of public record. But what he has been saying for the last 30 years has been unraveling like a script. Forget about David Icke. It doesn't matter if the tooth fairy is delivering the message - it's prophetic and a call for a reawakening. You don't see it because you are stuck from 30 years ago. Stay there if that is your choice. Subscribe to 5G and get the vaccine. No one is stopping you from making those choices.

>>What he has been saying for the last 30 years has been unraveling like a script.<< Even the part about the reptile robots?

TheLoneRider
(Apr 13, 2020) I don't believe everything he says. But David is a smart guy - that can be discerned from his interviews. And he publicly states that his arguments will be more believable, more compelling and more persuasive if he would only shut up about his reptilian claim. But he doesn't because it's part and parcel of the big picture. People who have something to say but afraid to come out go to him. And he ties up the pieces together to see the big picture. I will stop at saying he knows much more than we do.

Alright. I've already spent enough time with you and your heckling. Until you make the effort to know the arguments on the other side (which you flatly refuse), you're just a heckler. Enjoy your 5G and when it rolls out, enjoy the vaccine.

Genuine Human
(Apr 12, 2020) Thanks for sharing this important information!

Nix Dawn Yoga
(Apr 12, 2020) Thank you Lone Rider for this article on the Covid 19 and Conspiracies.

The Meditator who Cried Foul!
(Apr 11, 2020) Inspiring and eye opening interview on London Real! One more proof that nothing is as it seems. We as present being have the duty to stand up and bring conscious energy to this world as long as we live. Namaste ❤

(Apr 11, 2020) Kuya Git, I also saw David Icke's video about the extraterrestrial race reptilian intervening in our worldly affairs. I believed extraterrestrials after I saw unacknowledge on netflix.