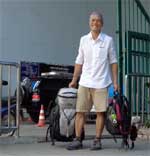 Clueless in Mae Sai
After my abrupt departure from Tachileik (Myanmar), I found myself back to the border town of Mae Sai (Thailand), with no place to stay and no plan on what to do next. I was on edge. Luckily, the hotel owner I talked to, approved of my proposal and agreed to give me 3 nights in his hotel. That was a tremendous sigh of relief to me - the first time since I crossed into Myanmar. I now have 3 days in Mae Sai to get my bearing, catch up on things and plan ahead.

Visa Run Refuge
Up until recently when the Thais cracked down on visa runs, this border town has been the favorite crossing by expats wanting to extend their stay in Thailand. The bombing in Bangkok in 2015 caused a stricter enforcement of the visa-run law by Thai Immigration. Now, you have to show proof of onward travel as they favor the formal tourist visa issued by the Thai Embassy (outside Thailand) rather than the transit visa-on-arrival. Until they cut a slack on the law (I don't think they will change the law. They just enforce or loosen it), visa-runs in Mae Sai is a thing of the past. 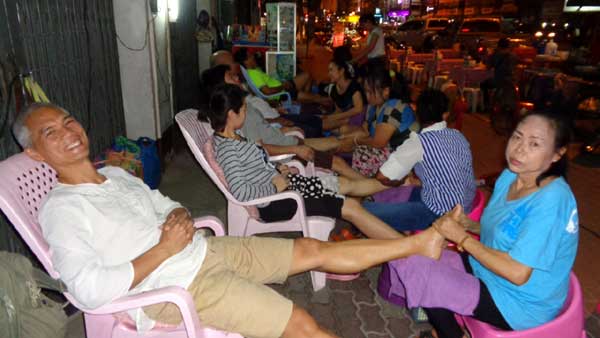 Big Market
The big market is Mae Sai's biggest draw. Because of cross-border shopping, with Myanmar and Laos converging into what is called The Golden Triangle, Mae Sai sees a frenzy of shoppers given its expansive market. You get all kinds here from the typical colorful Thai clothing to jewelry, buddha figurines, gadgets, dried fruits, etc. Unlike Chatuchak Market in Bangkok where a big grid is allotted for the market, here in Mae Sai, the market is a labyrinth of alleys and streets densely filling up the inner west area of the border. It's like an intricate spider web - every which way you turn is an array of vendors usually specializing in a particular merchandise (eg. - umbrellas, slippers, etc.). The ambience shifts during the night time when the inner stores close and the night vendors occupy the side streets. Street eating is fabulous, delicious and cheap.

City Center
About 4 kms south, towards Chiang Rai, the city center of Mae Sai has a big Makro with an equally big Tesco across the street. There isn't too much city life in Mae Sai. The main action still happens in Chiang Rai, about an hour south.

Ending Thoughts
Mae Sai was not even on the plan. I was to go to Chiang Rai after Myanmar. But it called out. With hardly any tourist and locals who don't speak English, I was mostly alone exploring the market scene. Except for its cross border ease (unless you're doing a visa run) and the big market, there isn't much happening in Mae Sai. But if you are in the area, it's worth a visit and dabble in what it has to offer. At this point, the frontier of Laos is also a short trip away or you can venture more within the Golden Triangle area of Northern Thailand - Chiang Saen, Chiang Khong, Chiang Rai and Sop Ruak.

Amazon Carpenter
(Apr 28, 2016) I love the contrast of the look on your face vs the lady rubbing your feet! LOL oh dear. Such is life eh!

»» next Traveling story: Exploring Chiang Saen, Thailand
»» back to Traveling
»» back to Homepage

[an error occurred while processing this directive]
Moto to Heal

[an error occurred while processing this directive]
Moto to Heal