Evolution and Existence Without God

Going Ape over Adam and Eve
Two days ago, I was having dinner and a few drinks with friends involved in genetics. They talked about Charles Darwin and the challenge he faced about going public with his book, Origin of Species. He kept the book from the public for nearly 20 years for fear of the church's reprisal. His conclusion that we evolved from apes ran smack against the Adam and Eve version of the church. 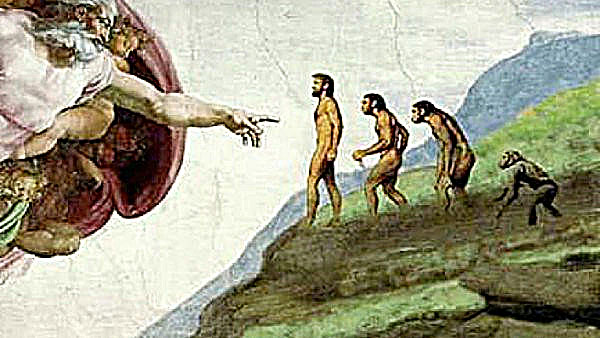 The Genius of Darwin hosted by Richard Dawkins
It was uncanny. Just a few days before that, while watching the series Through the Wormhole, I stumbled on a documentary that got my attention - The Genius of Darwin, but pushed aside to watch the other documentaries I've already lined up. When something persists like this, it's my cue to take action and get involved. In compliance, I've put aside what I've lined up for Monday morning just to watch this docu, The Genius of Darwin. The most pleasant surprise came when Richard Dawkins, famed author of The God Delusion, turned out being the host...double header!

It Never Happened, There is No Evidence
I watched the 3-part series in one sit. I won't bother explaining the details about evolution - that's already a known fact. What struck me in the film was society's rejection of evolution in this present day and time, despite overwhelming fossil and gene evidence to the contrary. Teachers don't teach it or teach a mongrel version of it in the finest learning institutions in first-world countries. As a grade-schooler, I still remember my teacher telling us he didn't believe in evolution!

The Dilemma
Before my I came to the conclusion that divinity resides within us (not in the Bearded One), I used to accept both versions - that yes, we evolved from apes and yes, there is a God. But if you think about it, that's like having your cake and eating it too. You just can't have it both ways. If we evolved from apes, then it means we didn't come from Adam and Eve - wham! If evolution happened in the course of millions of years, then it goes counter with the Creationist claim that the earth is less than 10,000 years old, let alone the claim that God created the universe in just 7 days!

Jobless Pope
I can also understand why the church fuels all objections against evolution. If evolution contradicts God's claims, then perhaps there is no God in the first place! This can be very destabilizing to the church. It can crumble under the weight of its own dogma and the pope becomes an unemployment statistic. Society is left to rethink for itself - the church being all too powerful simply cannot afford losing its vise-grip on the public psyche.

Free Falling
That scenario is truly scary. I know. I went through that horrifying process myself. While watching the film, I once again relived the feeling of being "alone in this wide universe" when I came to an inevitable conclusion of a man-made God. Yes, I can empathize how disconcerting this proposition might be to those on the fence about evolution. To subscribe to evolution means to walk away from a belief system that has taken a lifetime of indoctrination to mold, reinforce and temper. To most people, God is the very core of their identity. Take away God and suddenly the bottom lid falls off and you go into a free-fall without the emotional solace or psychological well-being that religion feeds its followers on-demand (like opiates for the masses).

The Rigged Game Show
To the general society at large, it's not really about the truth - it's about what's comfortable. Again, I'm reminded of the game show scandal that happened in the 50s, Twenty One. The public vilified the whistleblower for exposing the truth. Why? Because by exposing the truth, it revealed that the public's idol, Charles Van Doren, was not honest. The public was comfortable having Charles Van Doren as their darling champion despite the duplicity. Yes, the public stayed in their comfort-zone at the expense of the truth. Try this one out for size - if it was later proved that Christ was actually born on March 15, do you think you will now celebrate Christmas on March 15? Yes, exactly my point.

Life Without a God
So, what's it like to live life without a God? I'll be the first one to tell you it's frightening...but only in the beginning. Imagine yourself leaving a job you've had for 20 years in order to work freelance. You're leaving your job where you know everyone, where you know how the system works, where you're familiar with the surrounding walls. To walk away from that is to walk away from the safety and familiarity it offers and into the uncertainty that looks like a bottomless abyss. It's frightening.

Empowerment
But after you falter a few times on baby steps, you get a sense of bearing and begin to appreciate the openness around you...you begin to appreciate the new options you can exercise. Now, there is no delusion of divine intervention or divine fate. The blinders are removed and you realize you're entirely on your own with no safety net, commanding your fate as you make it happen. You're now free to think critically and question anything that doesn't make sense - no more blind loyalty, no more blind obedience, and no more going on auto-pilot because "that's how things are". It's a feeling of empowerment like no other - and you don't need a million dollars to make it happen - just the confidence that you represent an unbroken line of ancestors whose genes have survived the challenges of a dog-eat-dog landscape through millions of years of natural selection.

Greg & Sally Tree Garden Cafe
(Mar 6, 2012) This is an endless debate but I do subscribe to a Creator beyond dogma and rituals. It's not a communist opiate nor a debilitating crutch...God is far greater than we can ever imagine...it's like love which we can never truly define - enriching, intoxicating yet bewilderingly complex. Neither can I ignore the merits of evolution but I reckon regardless of belief being good in heart and deed is the best way to live.

TheLoneRider
(Mar 6, 2012) I believe this debate has its origin when we were still in high school, although I can't remember which side of the fence you were on...or where I was on. But life continues to unravel, shaping our paradigm to what it is now. But I agree with you that regardless of belief being good in heart and deed is the best way to live. And one last thing...opiate is not necessarily a communist monopoly...I'm not waving the red flag here...nor any flag for that matter. Thanks for sharing.